REMEMBER WHEN: 1890 – Hooray for Andalusia 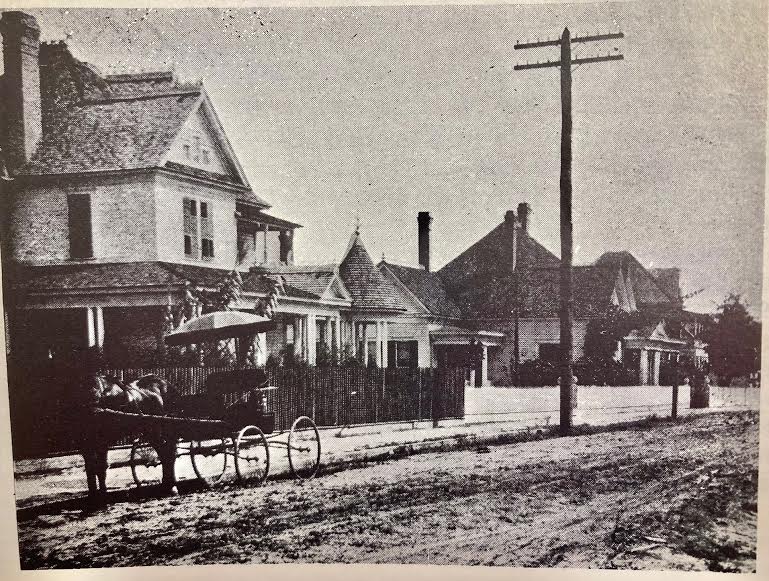 The year 1890 in Andalusia was a good year to open to the old newspapers and peruse events of the day. 120 years ago was a time full of progress toward moving from a village to a town. Opp authors Gus and Ruby Bryan researched and wrote about much local history in their book, “Covington County History 1821-1976.”

“The history of Andalusia really starts about 1890 or thereabouts. There was little to it before then, for the whole county was little more than a wilderness. In 1890 a railroad had penetrated the county as far as Searight at the northern edge of the county. It was then that Andalusia began to come forward.”

The Covington Crescent – January 1890 – “Andalusia is growing more and more metropolitan-like. The circus is coming and the average youth is happy. Last week we had the hand-organ and monkey. This week we have posters everywhere for a circus and oysters on the half shell, the latter being enjoyed by a few fortunate gentlemen Wednesday evening. Hooray for Andalusia!”

“Four strolling Italians, two hand-organs, and couple of frolicsome monkeys was the attraction on our streets Thursday.”

“The beauty and chivalry of Andalusia whiles away the time occasionally at social gatherings.”

“Mr. William Riley brought home with him a handsome white horse which he purchased in the Capital City last week.”

“The mill men and hog-raisers are anxious for the weather to turn colder. The former want to run off timber while the latter want to kill their porkers.”

“Contractor Gantt is making satisfactory progress on the new Bullock Bridge. He informs us that the work will be completed by the time specified in the contract in February. The material being used and the work done so far seem to be first class in every respect.”

“Major W. J. Van Kirk of Pensacola, one of the best known and most successful real estate dealers in Florida and Alabama was in our town yesterday. The Captain’s visit to Andalusia just at this time means a good deal. Covington real estate will soon be in big demand, and it is probable that the far seeing Major is prospecting with a view to investing in our valuable lands before the booms set in which is sure to follow the extension of the Luverne Road.”

“GOOD FOR ANDALUSIA – At last, we are able to announce that the brightest hopes of our people are to be realized in the extension of the Luverne Road. Mr. J. C. Woolfolk of Troy came to town for the purpose of having placed on record the necessary papers to secure the money to build the road from Luverne to Andalusia. He stated that the extension of the line was a certainty, as settled fact. In the event that the route decided upon should miss Andalusia, our people must bestir themselves and bring it to this place. We will endeavor to keep up with future developments for the benefit of our readers.”

“A falling chimney killed a leading citizen the other day.”

“The measles have a firm grip on our people. We hear of several new cases this week.”

“Our assistant found a cat as dead as Julius Caesar quietly resting in a corner of the printing office Monday morning. The balance of the day was spent in fumigating the premises.”

“The Christmas tree at the Methodist Church Christmas Eve

was enjoyed by large crowd present. The tree loaded with

presents both pretty and useful presented a beautiful

appearance. The little folks were made happy by numerous gifts while the papas and mamas were pleased because of the happiness of the dear little ones.”

“The liquor license election came off Monday last. About the usual vote was cast – Fifty-two votes in favor of license and four against. The annual license having expired, the two bar-rooms closed doors on the first day of January and were not re-opened until after the polls closed Monday evening.”

“J. H. Faulkenberry is a crack safe opener. He, however, does his work in broad daylight and according to orders. Faulkenberry, the crack machinist, had very little trouble in opening the circuit clerk’s safe which swung to and automatically locked last week.”

“Mr. Aus Prestwood, after a brief ‘rest’ has returned to his ‘first love’ – the saw mill business. He has now in the course of erection a new saw mill on Conecuh River just above Bullock’s Ferry. The machinery has been ordered. The foundation and framing is nearly completed. The mill will begin cutting timber in the near future. There are few better or more successful saw mill men in the state than Mr. Prestwood.”

“Mr. Ansel Huckabaa, nineteen years old, was seriously hurt on last Saturday. He was driving a log cart for Mr. Ezra Rawls near Hamptonville (Gantt) when just as he jumped on the tongue, the wheel struck a stump, and he was thrown to the ground. The wheel passed directly over his head causing blood to rush from his ears and inflicting painful bruises. Fortunately the cart was not loaded at the time or he would have been killed instantly. When last heard from the young man was doing well as could be expected considering the serious nature of his injuries.”

“Miss Jessie Albritton of Mt. Olive, N. C. has returned to Andalusia. We are glad to say that this accomplished young lady will open a school in the academy at this place next Monday morning. She taught school at Rose Hill about two years ago, and the patrons were highly pleased with her work. Now that a competent and experienced teacher has been secured, it is the duty of parents and guardians to patronize the school.”

The following ads were among those in the 1890s newspapers – “Henry Opp, Attorney at Law, Over C. A. O’Neal’s Store; S. I. S. Cawthon, Physician and Surgeon, Female Diseases and Enemies Specialty, Promptly Attended, Charges Reasonable; Ed T. Albritton, Attorney at Law, Will Practice in all the courts of the state except the Chancery Courts. Collecting promptly looked after; (Malachi) Riley & (Cyrus) O’Neal, Real Estate Agents; Bradshaw’s Saloon, I keep constantly on hand a select stock of Wines, Liquors, Beers, Cigars, and Tobacco, Call on me, Examine good, and Learn prices. J. T. Bradshaw (*Note – Bradshaw later became Covington County Sheriff in 1900!).”

“Mr. J. E. Pagett of Red Level brought us a four-pound turnip this week. It was planted in September and was firm and juicy.”

“Our young friend Roy Jordan has left us the ears of a Texas jack rabbit which are fully five inches long. They were brought from that state by Mr. Val Moore.”

“A fight between two large ganders attracted quite a crowd on the street one day this week. The battle was a fierce on and finally terminated in one of the belligerents beating an inglorious retreat.

“We will enter upon another year’s labors with stronger resolutions and brighter hopes. We wish our patrons, one and all, a pleasant Christmas and a Happy and Prosperous New Year! Walter P. Howell, Editor. ”

The map shown in this column shows Andalusia as it appeared about the year 1889 as remembered by W. L. Howell, the newspaper editor’s father. The Three Notch Street or Road cut diagonally across what is now known and the Court Square then on out toward South Three Notch Street. A two-story frame courthouse that had replaced a building of pine logs sat in the middle of the square. A row of chinaberry trees were spaced at regular intervals around the square. The Bryans penned that “Under these trees, the children played in the daytime, and men rested their oxen in the shade of them. At night the cows and hogs would gather from the surrounding forests to stay the night under their sheltering boughs. These old trees commanded a prominent place in the memories of old Andalusia for Mr. Howell.”

“NOTICE – I will be at Andalusia from the 20th of December to January 5 for the purpose of collecting taxes. Parties will save extra cost by coming forward during the time and settling their taxes. E. Dixon, Tax Collector.”

So you see, readers, as we Remember When, nothing has changed when it comes to the time for paying your taxes in Covington County! 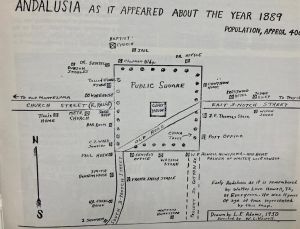