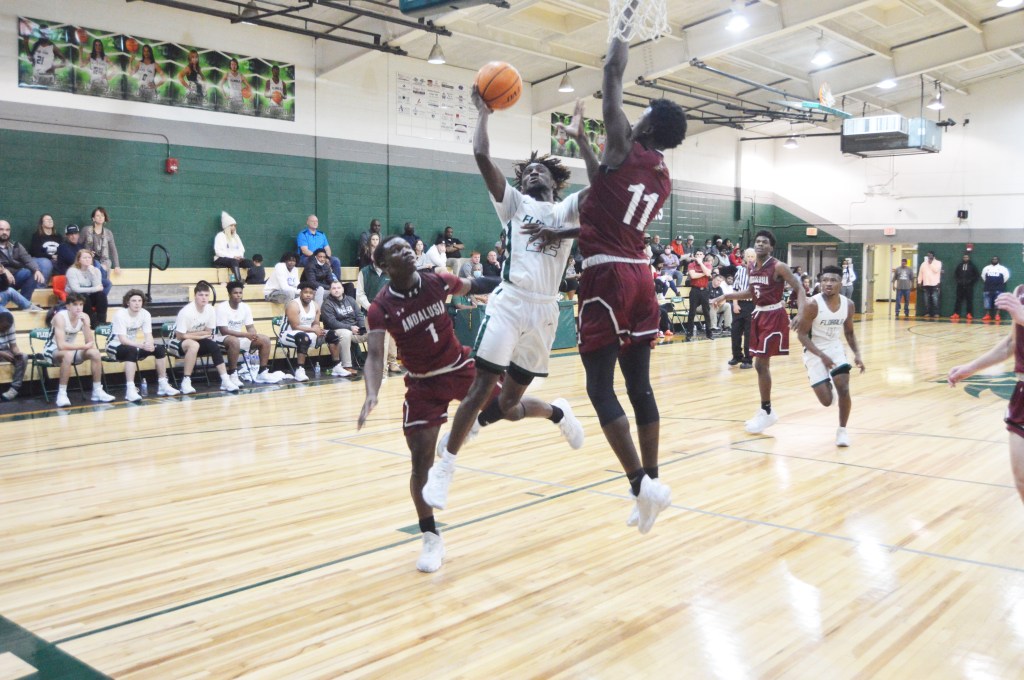 Wildcats hold on in final seconds to clinch victory over Andalusia Monday night, 64-61

Andalusia’s Omare Lattimer started things off for the Bulldogs to go up 2-0.

Isaiah Brundidge increased the lead 4-1, but Anthone Stone answered for the Wildcats with 5:46 left in the first period.

Florala took the lead when Zacchaeus Reese and Stone both had layups to go up 7-4.

Brundidge tied it up for the Bulldogs with 4:22 left in the first period, 7-7.

Jake Wilson hit a three pointer to take the lead for the Bulldogs 10-7. Mekhi James answered for the Wildcats, but Brundidge answered again to make it 12-10.

Stone hit a three pointer for the Wildcats with 2 minutes left in the first period, but Brundidge answered to make it 16-15 in favor of the Bulldogs.

The Wildcats ended the first period up 19-16 with baskets from Rashaad Coleman and Stone.

Coleman opened the second period for the Wildcats and Drakkar hit a three pointer to increase the Wildcat lead 24-18.

Jake Wilson and Tyler Siger both scored for the Bulldogs to make it a two point game with 5:30 left in the first half.

Coleman hit a three pointer and a layup to take the lead right back 28-26.

Coleman was then fouled with 3 seconds left in the half to go into the locker room up 33-31.

The Bulldogs started things off in the third period when Brundidge hit a layup to tie the game at 33-33.

Coleman hit a three pointer to take the lead along with some help from Reese to make it 38-35.

Lattimer answered for the Bulldogs to make it a one point game.

The Bulldogs took the lead when Mike Hourel made a layup to make it 39-38.

Gettis took the lead back with a layup with 3:04 left in the third period.

With 37 seconds left in the third period, James hit a three pointer for Florala to go up 43-41 going into the fourth period.

Reese opened things up for Florala in the fourth period, but a technical was called on the next play. Andalusia trailed by two points after the technical foul.

Reese kept things going for the Wildcats as well as James to make it 51-45.

Hourel had an and one to make it a two point game with 4:04 left in the game.

After several free throws, the Wildcats still sat on top 58-51, until a layup from Brundidge to make it 58-53.

With 50 seconds left in the game, Hourel had another layup to cut the Wildcat lead to 59-56.

Coleman then made a free throw to cross the 60 point threshold for the Wildcats, but Hourel came back with another and one to make it a one point game.

After a couple of free throws, the Wildcats came out on top 64-61.

Rashaad Coleman led the scoring effort for the Wildcats with 20 points, 6 rebounds and 4 steals. Mekhi James had 14 points, Anthone Stone had 13 points and Zaccaeus Reese had 9 points and 5 rebounds.

Brundidge led the scoring effort for the Bulldogs with 16 points. Latimer had 13 points and Hourel had 12 points.

“I thought that we played well,” AHS head coach Brad Goldman said. “Florala has a heck of a team. They have about eight seniors and they are a really good team, no excuse about it. Their guys did a great job executing and making shots. At the end of the day, we missed 12 free throws. If we make anywhere near what we should be making at the free throw line, we have a really good chance of winning the game. We still had a chance at the end, but they made a great defensive play. It was a good game and they just outplayed us in the end.”

Going into area play in a 5A classification will be tough for the Bulldogs, but Goldman said they are only focused on themselves.

“It’s a three team area, but it’s with two teams that are both probably top 10 in the state of 5A program,” Goldman said. “We are just going to get back after it tomorrow, watch some film and hopefully try to pull one out on Friday.”

Coming back from the Christmas break, FHS head coach Troy Turman said it was an ugly win for his Wildcats.

“It was an ugly win, but we will take it,” Turman said. “Andalusia has a tough team. They play hard and they have improved a lot since we have played them last. We had a break, one practice and then we played a game. So, in these circumstances, I am proud of the team. I have a lot of respect for Andalusia and I am proud of our guys for doing what they did.”

On Friday, Florala will take on Samson in their first area game of the season.

Andalusia takes on Charles Henderson in Troy on Friday night and Florala takes on Samson in Samson on Thursday night. 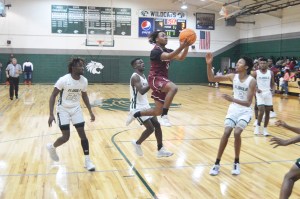 Lady Bulldogs use heavy first half to win over Lady Wildcats Monday night, 51-47

The Andalusia High School varsity Lady Bulldogs came out strong in the beginning and held on to win against the Florala High School Lady Wildcats on Monday night, 51-47.

Andalusia was up after the first period, 18-5, with baskets from Anderson, Sheridan, Gay and Crittenden. Florala’s baskets in the first period came from Fry and Sharae Coleman.

With 5:08 left in the first half, Andalusia increased its lead with Sheridan and Gay to make it 23-6 after a free throw from Coleman.

Anthony hit a three pointer for Florala to cut the lead, but Lowery answered to make it 25-9.

Gay hit another layup for the Lady Bulldogs and Anderson hit a free throw to go into the half, 34-19.

Florala’s Coleman hit a three pointer to open the second half, then hit two layups to cut the lead 34-19.

Things started heating up for the Lady Wildcats when Coleman got a layup and Anthony sank both of her free throws with 2:58 left in the third period to cut the Lady Bulldog lead 35-36.

Anthony came back with another layup then took it to the house after a steal to make it 35-30.

Coleman had an and one and made it a two point game with 1:29 left in the third period.

With 39 seconds in the third period, Anderson had a layup for the Lady Bulldogs to make it 38-35, but Anthony answered to go into the fourth period 38-37 Lady Bulldogs up.

Coleman opened up the fourth period to get the lead for the Lady Wildcats, but Sheridan answered and Anderson had another layup to gain the lead back 42-39.

With 3:53 left in the game, Anthony tied the game up for Florala, but Sheridan answered for the Lady Bulldogs to make it 46-44.

Coleman then hit a three pointer to take the lead for the Lady Wildcats again, but Woods cut the lead back down to one point right after.

With 1:18 left in the game, Anderson hit a layup to increase the Lady Bulldogs’ lead and Lowery sealed the victory with a free throw with 9 seconds left to end the scoring effort at 51-47.

Anderson led the scoring effort for the Lady Bulldogs with 15 points. Sheridan had 10 points.

Coleman led the scoring effort for the Lady Wildcats with 21 points. Anthony had 15 points.

“I told the girls at the end of the game that I wasn’t really upset with the loss because of the way they fought back in the second half,” FHS head coach David Bass said. “We just came out flat. We haven’t played since December 18 and it really showed in the first half.”

Looking forward, Bass said his girls have to keep up the defense.

“Defensively, we only gave up four points in the third period,” Bass said. “I think we need to improve defensively, execute and we need to work on executing our offense. That is one of the reasons we got in the hole in the first half. We just half to tweak some things up before area play and I think we will be alright.”

Going into this game, AHS head coach Bennie Shellhouse said they have been focusing on themselves.

“We have not played as well as I would have liked for us to, and I just wanted us to be more competitive,” Shellhouse said. “Our first half was really good and then in the second half we came out and didn’t play nearly as competitive. They have a great team though. They have a couple of girls that can really play. I’m really more concerned about us and doing what we need to do to be competitive.”

Andalusia’s next game is against Charles Henderson in Troy on Friday night.

Florala’s next game will be against Samson in Samson on Thursday night. 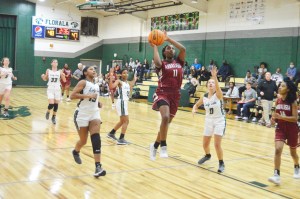