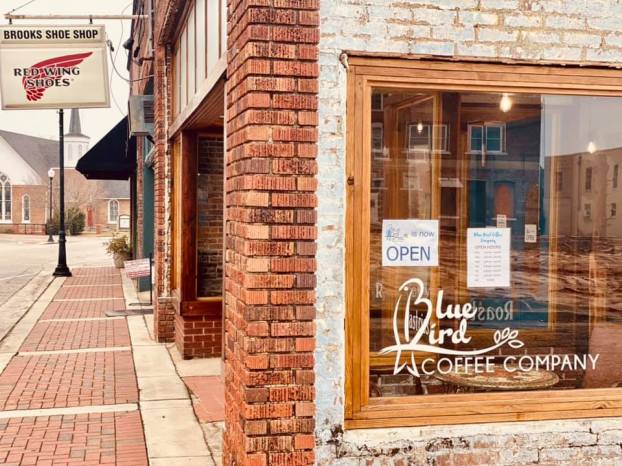 After a long period of renovating and remodeling, the Bluebird Coffee Company’s doors are open and are hard at work already serving the community.

Owner Lee Williams said the support from the community has been overwhelming since the coffee shop’s opening on Monday.

“We did an unannounced opening, just so we could get our feet under us,” Williams said. “We didn’t want to get rushed too badly and we wanted to make sure that we had everything learned. It has been overwhelming. It was unbelievable. We started today [Tuesday] with our first customer at 6:30 a.m., right after we opened the doors. It was steady up until the time I left around 11:30 a.m., and then when I came back it picked up a little bit.”

Now that the shop is open, Williams said the feedback has already been great.

“It feels amazing to be open,” Williams said. “The feedback from everyone has been great, as well. Everyone says they love the shop.”

The shop is featuring local artists, as well as different writers from the area.

“We have a lot of featured local artists’ work hanging up all around the shop,” Williams said. “While people are enjoying their coffee or waiting around to get their coffee, they can look at the art and see what our local talent has to offer. We also have t-shirts, caps and different things like 4 King Honey.”

Though the Williams do not have a background in coffee, he said the learning process has been a great experience.

“The espresso machine guy came up to train us a while back and he was able to teach us a lot about how to draw your shots,” Williams said. “Debbie and Leanne have basically been Googling how to make the best drinks. It has been a little different, but everything has been great.”

The overall goal, Williams said, is to provide a service to Andalusia that the city doesn’t have.

“When I bought this building, we didn’t really have an idea of what was going to go in it,” Williams said. “After seeing that the city started buying the downtown properties, we went to a presentation they held and we heard the speaker say that one thing that Andalusia doesn’t have is a coffee shop and it immediately clicked with us. The whole community has given us a great response. It is really an adventure for me.”

The Bluebird Coffee Company is located at 200 South 3-Notch Street in Andalusia. Their hours of operation are Monday-Saturday from 6:30 a.m., until 2 p.m.

To help ensure the safety of its patients, providers, employees and community, Andalusia Health has implemented a zero-visitor* policy protocol... read more