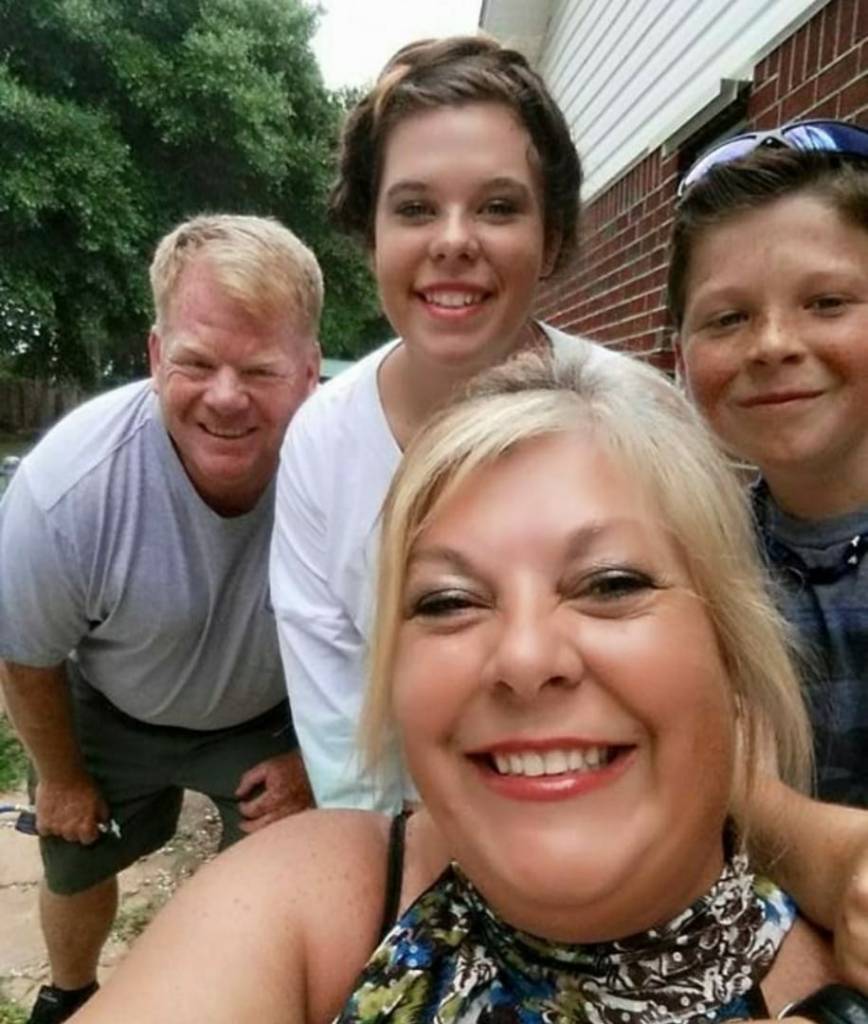 “My mother’s side of the family is where cancer is mostly seen in my family,” Munhollon said. “Her father had colon cancer back in the early ‘90s and cancer is what took the lives of his mother (brain tumor) and his father (stomach cancer) both back in the 70’s. Everyone in my family was healthy until one day in 2017 our world as we knew it came crashing down. I was in my bedroom talking to my husband about our day. I have always talked with my hands and happened to touch my right breast while talking. When I touched it I felt a large lump. My husband agreed something was wrong and told me to go the next day and get it checked.”

The next day, Munhollon’s family doctor of many years brought the news that something was wrong.

“He came in to see me and agreed with us that something was definitely wrong. Since it was Easter time he named it my Cadbury egg,” Munhollon said. “He sent me to get it tested and a couple days later I found out it was cancer. I had Triple Negative Breast Cancer. I was determined I was going to win my fight. I was doing this for my family. I’ll never say it was easy.

After a year of chemo, surgeries, even a double mastectomy, Munhollon was told she was cancer free.

“We were all so excited. I had won,” Munhollon said. “Then, it happened again.”

“My partner in crime, and the love of my life for the past 21 and a half years is diagnosed with stage four colon/ rectal cancer,” Munhollon said. “Brian had always hated doctors and never took care of his health. He had needed to have a colonoscopy for a few years and wouldn’t go. With everything he had just watched me go through, he knew it was time to get his health in order.”

Munhollon said he finally agreed to get a check-up and that’s how they found out he had colon/rectal cancer.

“If you knew Brian, you knew he was a very proud and private person,” Munhollon said. “When he loved, he loved with his whole heart. Brian loved law enforcement. He got the bug on a ride-along with his brother in law that was a deputy. Brian became a deputy one month before he and I got married. I was happy with this because Brian was so happy and doing what he loved. It was his passion. He was proud to be part of the brotherhood.”

Now, with cancer, Munhollon said that scared her more than him being a deputy ever did. “This was a very depressing time for Brian,” Munhollon said. “He was in the hospital four times and had been to UAB in Birmingham a few times. On October 23, 2018, I had to call an ambulance to take Brian to the hospital. He didn’t have the strength to walk from the bedroom to the living room. I knew he needed help. Little did I know, he would never come back home. November 7, 2018, my children and I lost the greatest man we ever knew.”

“Everyone has 2020 stories, unfortunately I do also,” Munhollon said. “In March 2020, my sister was diagnosed with stage four Neuroendocrine cancer. She fought hard with this and in September 2020 she was admitted to the hospital in hospice. On September 20, 2020, after a hard 6-month battle she passed away. Then a few days later, I started having pain in my chest. It felt like someone stabbing me and would take my breath. After going to my oncologist and being told I was okay, but he listened to me and ordered tests.”

On October 28, 2020, Munhollon was given the news that she had cancer again.

“After having a biopsy, I learned I have triple negative breast cancer again,” Munhollon said. “By the time you all read this, my world will be changed again. On November 23, 2020, I will have surgery to have a port put in. On November 24, 2020, I start chemo. I don’t know how my story ends; God is still planning my journey. I don’t know why this has happened to our family, only God knows. I hope my story helps one person and it’s all worth it. I’m a fighter and I will do whatever I need to to win this fight again. So please don’t feel sorry for me. God is good and blessed my life in many ways. I have two amazing children, Alyssa 19 and Brian “Alex” 16, they are my world.”

Munhollon said Cancer Freeze was brought into her life for a reason.

“If nothing else but to lift my spirits,” Munhollon said. “God bless everyone that donates and helps with Cancer Freeze. There are amazing people within this organization.”