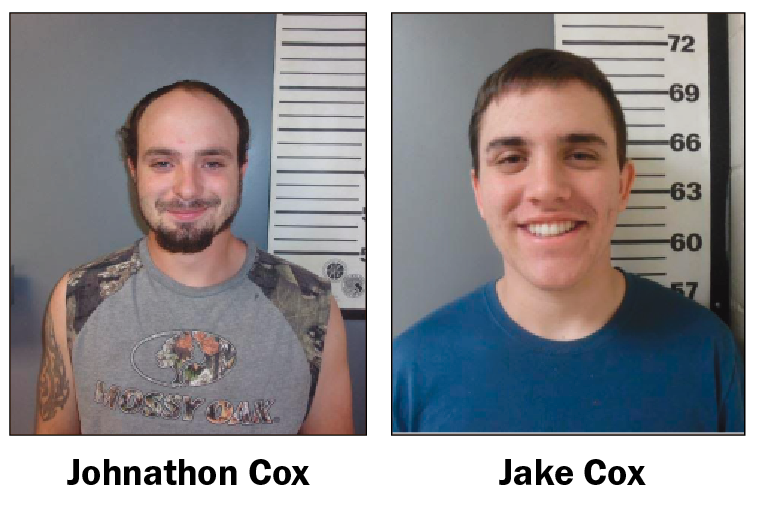 Brothers Johnathon Steele Cox, 23, and Jake Alan Cox, 21, both of Andalusia, pleaded guilty on Thursday before Circuit Judge Lex Short for their roles in a 2017 attempted murder near the Pleasant Home community.

District Attorney Walt Merrell prosecuted the cases and offered that “this was a terrible crime, and it is tragic that these two brothers made such poor decisions, but thankfully, the victim is still with us.  This could have been far worse.”

“This was a premeditated attack on an innocent victim,” Merrell said. “The Coxes planned what they thought was their ‘perfect crime’ and then carried it out, running from police and believing they had gotten away with it for nearly two weeks before giving in and showing up for an interview.  The brothers then naively believed they had created and rehearsed a story solid enough that the Sheriff’s investigators would exonerate them.  As is most always the case, they were wrong.”

The evidence in the attempted murder case showed that Johnathon Cox created a fictitious Craigslist account using the name “Ryan Lawson.”  Johnathon then listed a camper for sale using the Lawson account.  The victim, a resident of Florida, responded to the Craigslist advertisement and traveled with a friend to Pleasant Home, to meet the seller and view the camper.  The victim first made coincidental contact with a vehicle, occupied by both Cox brothers, and asked for their assistance in locating Ryan Lawson.  The brothers indicated they knew Lawson and would assist in finding him.  They then directed the victim to another location.

Shortly thereafter, the victim came upon Jake Cox traveling alone in the vehicle he had seen the brothers in earlier.  Jake Cox instructed the victim to travel further down the road to arrive at Lawson’s property.  As the victim did so, he arrived upon an obstruction in the road – a road sign intentionally placed in in the middle of the road by Johnathon Cox.  As the victim exited his vehicle to clear the obstruction, Johnathon Cox approached from the woodline and shot six times with a .45 handgun, striking the victim in the leg, and hitting his truck three times.

Officers developed the Coxes as suspects after they were connected to a burglary and firearm theft in Andalusia.  Stolen in that burglary was a .45 handgun.  Officers were also able to match the description of the vehicle given by the victim and his friend to the vehicle of Johnathon Cox.  Subpoenas were served to Craigslist and search warrants were executed for the cell phone numbers of the brothers.  Those responses yielded account information identifying Johnathon Cox and provided GPS data that placed the phone in the area of the shooting at the time of the shooting.  Officers spoke to many witnesses, and eventually the Coxes contacted the Sheriff’s Office to tell their side of the story.

Initial interviews with the brothers revealed a rehearsed story that failed to match the evidence officers had already recovered.  When questioned about inconsistencies, Johnathon Cox refused to cooperate further.  Jake Cox did eventually tell officers a version of events that more closely matched the evidence, explaining that the brothers initially only intended to rob the victim of the money he would have brought to purchase the camper.

The victim in this case hopes the brothers learn a lesson and is glad they are paying for their crime.

“This could’ve been anyone responding to the false ad,” the victim said. “I would tell the public to be vigilant in using the phone and internet to make purchases.  These guys were out to kill to make money, and you just never know.  I still suffer from nerve damage in my legs and back, but it could’ve been much worse.  It was a real blessing that the Sheriff’s Office arrived so quickly.”

Merrell added, “Law enforcement did a great job investigating this case.  Using modern tools to put together the digital forensics, and using traditional, proven police methods of knocking on doors and talking to everybody, they really put together a great case.  Particularly, CCSO Captain Mike Irwin; CCSO Investigators Joey Cato, Jerry Fields, David Hamby, and Ken Harris; DA’s Office Investigator Brett Holmes; and State Bureau of Investigations’ Agents Johnny Senn and Robbie Barton – they are each owed a big ‘thank you’ for doing the hard work investigating.  District Attorney’s Office Victim Service Officer Amber Gladwell also went above and beyond in helping the victim find the services and help he needed.”