REMEMBER WHEN: The Story of the Andalusia Country Club 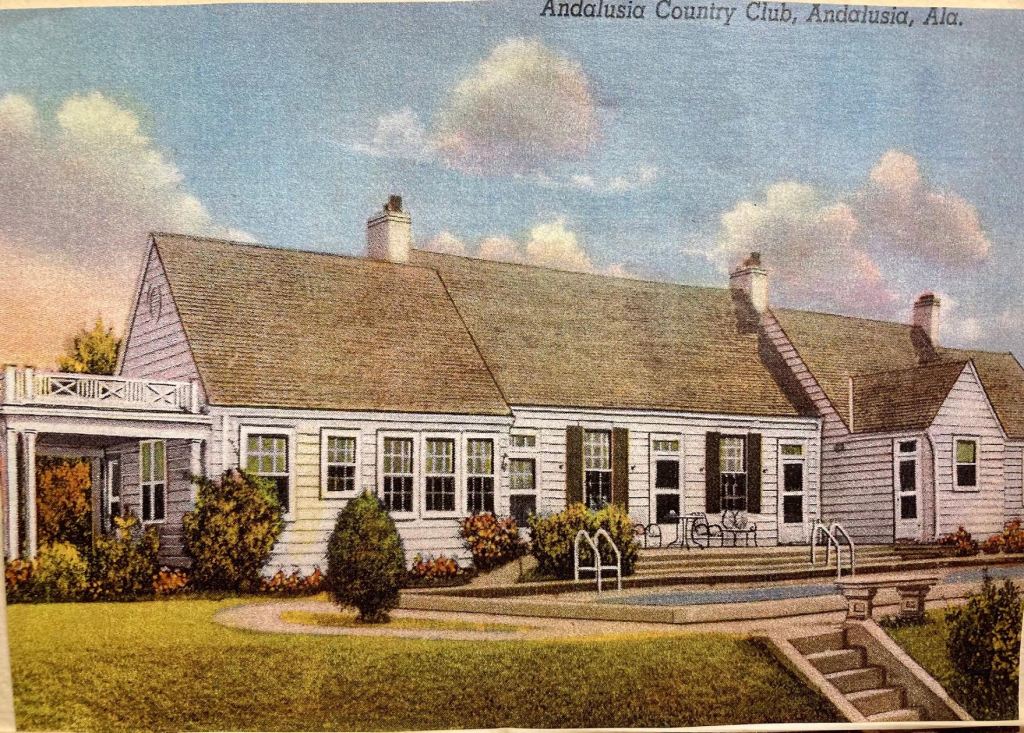 “Splish, splash, blow bubbles and kick like a frog,” my father always said as he pulled me around the shallow end of the swimming pool in that duck inner tube. It was always early in the mornings before Sunday School that the two of us would go to the Andalusia Country Club.  That’s where I learned to swim. After all, Daddy had a new moving picture camera. It must have been in the early 1950s when I was about four or five years old. “Oops, I turned over and went under in the frigid water!” All that crying was captured in the home movie. I remember it well.

Information about to be shared in this column was obtained from three sources – Sidney Waits’ historical newsletters, The Covington News, and The Andalusia Star from the July, August, September, and October 1927, 1930, and 1931 issues.

The Club was first organized as the Andalusia Golf Club in 1927 but became known later as the Andalusia Country Club. The charter president was G. S. Waits, Sr. and the charter vice-president was Luther E. Brown, Sr.  Frank H. Buck was secretary-treasurer. The Board of Directors was made up of Charles Henderson, Sumpter B. Milligan, R. N. McLeod, Capt. J. P. Tilley, Rev. A. H. McNair, George W. Adams, and A. C. Darling, Jr.

A July 1927 news article states, “Andalusia is to have a golf course. That much has been settled. Twenty-five citizens have taken membership in the golf club which was organized Monday afternoon. Plans are being worked out for the selecting of a site and for the securing of the necessary equipment. Andalusia is the largest town in the state that has been willing to rock along without having a golf course. Now that it is assured, we may expect any number of local golf enthusiasts and a corresponding number of ‘golf widows.’”

According to the late local author G. Sid Waits, Jr., the property originally belonged to the late James Austin Prestwood. The J. E. Brawner family purchased it next. A portion of the property was sold to George H. Barnes. Much of the progress of the club in later years is attributed to Barnes’ interest and leadership.

An August 1927 article reads, “The golf course site of 126 acres which is located on the River Road is some of the most ideal spots for a course and club house in the state. The crest of the west hill overlooks the river valley where magnificent scenery can be found. The links will consist of nine holes at present but will be increased to eighteen in the near future. A caddy house will be built by the time the course is cleared and sodded which is expected to take some 60 days. Andalusians will be playing golf by the time the course is laid out and the fairways cleared.”

“Not only will golf prove a favorite among the older generation but will develop, physically, the younger set. A number of the members have already ordered their golf sticks and togs. Complete outfits can be secured in Andalusia in the next few days. One merchant, O. L. Thagard, has so much faith in the organization that he ordered a general supply of sticks and balls which he is now carrying in stock when the first whisper of a golf club was suggested.

Editor Oscar M. Duggar wrote, “The golf course was formally opened in October 1927, the first flight began at two o’clock on a Monday. The organization was diligent in its efforts to have the golf course laid off and the grounds cleared and prepared for use of the lovers of the sport. The ground will improve with use while there is still much to be done in smoothing out the grounds on the fairways. A golf course for Andalusia will supply a long-felt want.”

“The invitation to be present at the grand opening is not confined to the people of Andalusia but to those of the surrounding counties and the cities and towns of this territory. A survey of the grounds shows that this committee has given a good account of its stewardship.”

In May 1931, The Andalusia Star reported, “Andalusia Country Club voted to build a $5,000. clubhouse. J. G. Scherf, chairman of the Country Club Expansion Committee, stated at the conclusion of a Rotarian/Kiwanian golf match that the new clubhouse which is to be a story and a half structure will have a basement with showers baths and lockers for members. The first floor will provide for the dining room, kitchen, and a dance hall/assembly room. There will be broad verandas with the building located on the highest point on the golf course from which there is a lovely view in every direction.”

In June 1931, The Montgomery Advertiser printed a sketch of the new clubhouse. The Andalusia Star described the structure as beautiful, comfortable, and modern designed by Montgomery architect Richard Adams, an Auburn man who recently entered into practice of his profession in his home city.

“The plan is an original one adapted especially to the surrounding terrain and setting. Located two miles from the business center of Andalusia, the new clubhouse crowns one of the highest hills in Covington County overlooking the Conecuh River Valley. The view is one of the loveliest to be encountered in that section of Alabama. The builders are W. N. Rushton and E. R.Merrill of Andalusia Development Co. of this city.”

Waits had in his collection a Rules and Roster of Members published by the Country Club dated August 1, 1931. The dues for membership that year were thirty-six dollars per year, payable in four equal installments. A charge of $10.00 was made for the use of the club house for private dances or other entertainment requiring the use of the building at night. The charge for a caddy was twenty-five cents for nine holes, fifty cents for eighteen holes. No member or guest could give money or fee to any caddy exceeding the regular charges. All balls found by a caddy had to be turned over to the player for whom he was caddying.

Girls and boys under the age of fourteen years were not allowed to use the course except when accompanied by an adult member and in no case on holidays, Thursday, Saturday, or Sunday afternoons. Memberships in 1931 were a little over 100.

August 14, 1931 – “A brilliant and beautiful reception and dance marked the opening of the new Country Club on Tuesday evening. The entire building with its tastefully arranged draperies and furniture; with huge bowls of red and pink radiance roses formed a setting of rare loveliness for the beautifully gowned women and their escorts who thronged the club during the reception house. The receiving line composed the officers and directors. Guests were directed to the north terrace where punch was served. Music for dancing was furnished by Al Stanley’s Orchestra from Montgomery. About two hundred fifty guests called during the evening.”

The Covington News of July 1940 reported the following: “For the first time in the history of the Andalusia Country Club, city water will be available for the pool and clubhouse today according to those in charge of laying the pipeline and making connections. Some weeks ago, the club voted to extend the city mains from the Prestwood Bridge Road at the George Barnes house to the club at an approximate cost of $1,600. The turning of the spigot will be completed today. It is expected that many more club members will take advantage of the swimming pool now that plenty of water is available for frequent changing.”

The original club house was destroyed by an early morning fire in April of 1975. By 1976 a new $375,000. ultra modern building was constructed. Albert H. Burnette was president of the club at the time of the new construction. Bob Smith was House Chairman and Building Committee Chairman. Ray Latimer and Riley Taylor served on the Building Committee. Mrs. E. E. Anthony, Jr. and Mrs. Bill Whaley assisted Smith on the Decoration Committee. Al Burnette, hometown boy who was a U of A graduate and decorator in Montgomery, assisted with the interior decorating. Charter members who attended the “Open House” of the new building in 1975 were John Wright, S. D. Brooks, G. W. Proctor, L. E. Benson, and Robert D. Burgess of Opp.

As we Remember When, we are reminded that through the years in its almost 100-year history, the Andalusia Country Club has been the site of many club banquets; bridge parties; Cotillion Club, Merry Makers, and Sub-Deb dances; golf tournaments; Sunday luncheons; birthday parties; ballet ball receptions; grid iron banquets; college alumni gatherings; Easter, Mother’s Day, and Christmas luncheons; and after-rehearsal wedding parties and receptions thanks to excellent club managers like the ones in this writer’s lifetime such as Abe Joseph and Walter Duebelt.

I thought it was rather interesting to find that in 1929, the road leading to the golf course was referred to as Golf Club Road. Am not sure when it became known as Prestwood Bridge Road. After World War II, several streets and subdivisions were established in the area near the club including Country Club Park and Country Club Hills. New homes began springing up and club membership increased with a new generation enjoying the sports and activities offered.