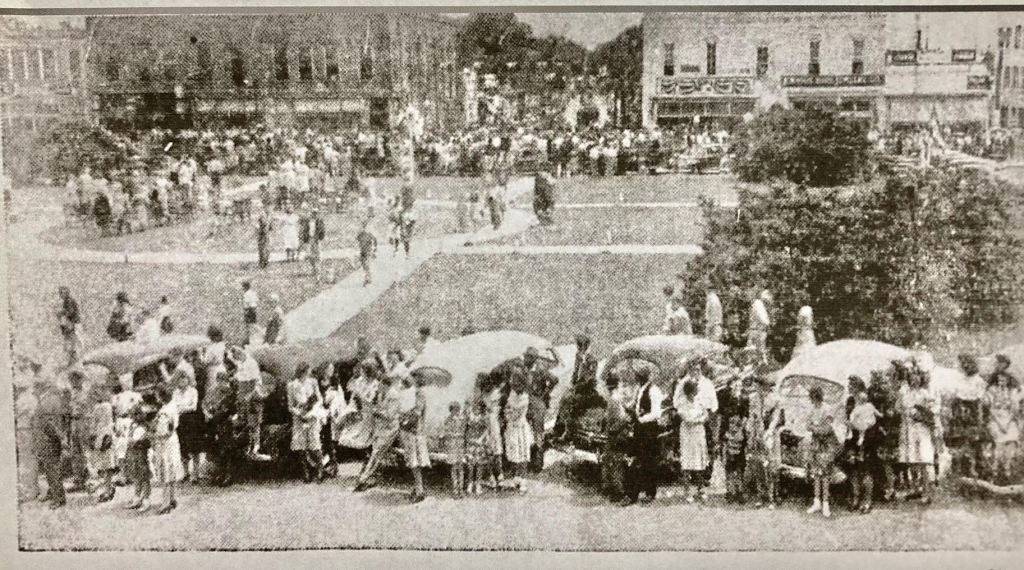 “Happy trails to you until we meet again…” If my memory serves me correctly, Roy Rogers and Dale Evans sang this song in their cowboy and cowgirl series when the children of the 1950s and 1960s went to the “picture show” on Saturdays. Those were the days of popcorn, colas, and candy – all you could eat for about 50 cents in those days.

In perusing the old newspapers on Ancestry’s newspapers.com, I ran across an article in The Andalusia Star written by A. Whaley called “Trees, Trails, and Traffic.” Whaley  wrote what many columnists penned about every ten years in various progress editions – about where the city and county had been in the past 10  years and where it had progressed in a given year. This year happened to be 1944.

Covington County had become a “political subdivision” in December 1821 carved out of another county and named for General Leonard Covington, a hero of the War of 1812. (Several counties had been named after heroes in that recent war – like Pike.)

The first county seat was at old Montezuma. “Doubtless,” he stated, “that location was named hundreds of year ago by members of Emperor Montezuma of Old Mexico. (Many have speculated where the name came from – Indian or Spanish influence.) It was at the time well located and a suitable point on the river for transportation as well as for traffic of the kind which was engaged in back in those long years ago. Boat, paddle crafts, and pole-pushing were methods used back in the olden days. Skins, meats, fruits, and livestock were about the major part of the marketable stuff. Indian races were engaged in hunting and farming – maybe some horse racing. The Spaniards came and the country began to change rapidly. Friendly with the Indians, the new Americans inter-married resulting in mixed breeds.”

“New trails were first made by Indians, live stock, and game. Floating timbers and crude watercraft were methods of water transportation.  It is said that an Indian assisted Andrew Jackson down the old Three Notch Road and thence to the coast and Florida. Coming through this section, it is also said by old timers that Jackson and his men camped at what is called ‘Soldiers’ Head’ some two or three miles northeast of Andalusia (in the present Heath area).”

“Trees were felled and rafts of timber were sent downstream to Pensacola only when the water level was high. When the water was too low to float the rafts, the rafts would have to be tied up waiting for another freshet with which to carry on. Men ate, slept, and remained on the rafts until the time came for the logs to reach their destination. “

“When the railroads came into Covington in 1899, the central laid its rails into the town first and also laid out its ‘Y’ for turning around. We then saw the light of day for modern transportation in this section.”

“Fifty years since we came to Andalusia, lots of timber has gone to the four corners of the earth. Lots of lumber, boards, naval stores, and the products of the trees have brought millions of dollars into circulation. Lots of fine top soil has gone down the branches, creeks, and rivers, and the conservation of the trees, forests, and soil is a live and material problem. “

“When Andalusia started growing after the railroads came in 1899, better roads and better streets became a live topic. We drew a petition under the general laws of Alabama to have an election to incorporate since we had no functioning city. It was voted in after a very hard political campaign.  The names of Henry Opp for mayor with four councilmen were published in the newspaper, and all were elected. Joe Jernigan was the first chief of police, serving many years until the time of his death.”

“We had the first official act toward better streets in 1919 when the city officials provided the grade ordinance for the business and residential areas revolving around ‘Court Square,’ the new courthouse then having been completed and the old one removed. A paved city and beautiful park resulted with the mayor being T. E. Henderson; Councilmen, T. G. Conner; Dr. J. C. Hill; J. A. Knight; H. J. Law; and J. L. Murphy; W. N. Brawner, city clerk; and A. Whaley, city attorney. Trails turned into streets and traffic increased (Horses, mule and wagons, buggies, oxen and carts then the horseless carriages).”

By 1947, The Andalusia Star published another article summing up the 1890s era called then the “gay nineties” when Andalusia had her first resurgence from that of an isolated rural village with a population of 270 to a railway center entering the town to tap the great timber resources awaiting the influx of the lumber jacks and the sawmills.

“It was in this period that the first builders left their permanent marks and building monuments which after almost 50 years (article written in 1947) comprise most of the business houses of this city. While Andalusia was made the county seat in the mid 1840s, it continued as a mere village for some 50 years after that with a log courthouse, later a frame courthouse, and a few other wooden structures with a boardwalk around a square.

It was not until the later 1890s and early 1900s that permanent brick structures within the city limits started to be constructed. Men of shrewd business ability and determination blazed the way to put “life and vigor” (or “snap and vim” as it was worded back then) plus keen business acumen and vision into business activities.”

This historic article, “When the Builders Came to Andalusia,” in its entirety is one of the most comprehensive histories written about the building of Andalusia in the first half of the 20th century. Even in 1947, it was concluded by saying that “Most of these early builders have passed on, but they left for their loved ones a rich heritage. For all Andalusians, they left an inspiration and a challenge that we may build for a greater opportunity – for the people of a greater Andalusia.”

As we continue to Remember When, this writer is amazed at the further progress made after 1947 and after World War II – housing, subdivisions, streets, civic clubs, restaurants, schools, churches, city utilities, industry, community service.  When the young adults that returned from the war making Andalusia their home, they became so industrious. Their determination and hard work to make Covington County an ideal place to live and raise a family paid off. It didn’t just happen. We enjoy the fruits of their labor today. What we sometimes take for granted is all around us. May the next generation of citizens and business people follow their example and learn from our history – a proud past, a promising future!