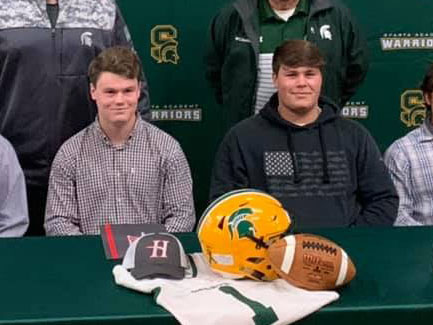 Two Covington County seniors are taking the next step to play football in college.

Sparta Academy senior Jake Jeter is following a family legacy by signing his letter of intent to play football at Huntingdon College.

“My mom, grandfather and uncle all went there,” Jeter said. “It is a big legacy school for me.”

It was eventually his future career that pushed him to go to Huntingdon.

“I think I want to become a physical therapist and they have a really good physical therapy school,” Jeter said. “Obviously playing college football was another big dream of mine, as well.”

Since eighth grade, Jeter said he has been on the field working towards this moment. He said representing Covington County is a big deal to him.

“There are not a lot of people to come out of Covington County to play college football,” Jeter said. “It means a lot for me to be able to do that.”

Now in his senior spring season, Jeter will take his talents to the baseball diamond until graduation.

“I just want to thank all of the coaches and the team that we had,” Jeter said. “All of the things that the coaches did for me were great.”

Jeter is the son of Grace and Jeff Jeter.

Due to the COVID-19 pandemic, Bozeman was not able to visit all of the schools he wanted, but with an extra year of eligibility, he said Goode Elite Prep Academy will help in the long run.

“There are not a lot of scholarships being given out right now because of COVID,” Bozeman said. “By going here, it is giving me a chance to play at a different level than high school and they will help me get recruited to a bigger school. I felt like this was my best option in working towards playing at the next level.”

Bozeman will spend one semester at Goode Elite, earning nine credit hours towards his college education.

“Another good thing is that I won’t even use any eligibility if they do get me recruited to a different school,” Bozeman said. “I will be able to play all four years instead of just three.”

Since picking up a football in fourth grade, Bozeman said his senior season was his best one yet.

“Making the move to Sparta was probably my best option,” Bozeman said. “The coaching and the school are just ten times better than where I came from. This year was the best year of football I ever had. Like Jake said, you don’t really know a lot of kids from Covington County schools that get to play at the next level because people don’t really pay attention to them. So, it is a big deal that I get to represent Covington County.”

Bozeman is the son of Chandra and Daniel Bozeman.