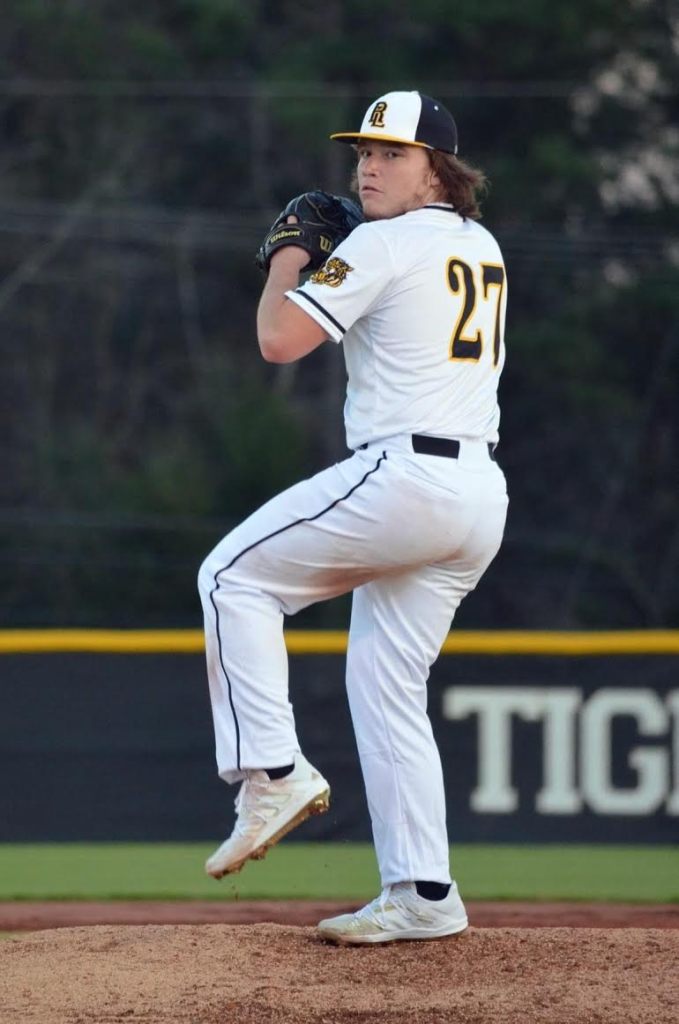 Opening Day for the Red Level Tigers Varsity Baseball Team last Saturday turned out to be a good one for the team.  Freshman Parker Adams got the start on the mound. He went 2.2 innings striking out 7, walking 2 allowing 0 hits and 0 earned runs.  Junior Brett Jordan came on in relief and pitched a very solid 2.1 innings striking out 4, walking 2 also allowing 0 hits and 0 earned runs. Hillcrest scored 1 unearned run in the 1st and 1 unearned run in the 5th.

The bats were hot for the Tigers.  Leading the way was Senior Tucker livings who went 3-4 with 6 RBI’s.  Junior Zavier Phillips & Freshman Parker Adams were both 2-3 with Adams driving in 2 runs.  Sophomore Walker Simmons & Junior Brett Jordan also picked up RBI’s. Sophomore Malikye Wright was a run producer at leadoff swiping 2 bases and scoring 4 runs.

Tiger Head Coach Todd Smith stated “It was good to start off the season at home in front of a good crowd and come away with a win. It was a total team effort.  Parker Adams and Brett Jordan did an excellent job for us on the mound.  We played solid defense behind them and we hit the ball fairly well.  We were able to play a few of our younger guys as well.  It’s always good whenever you can get those kids experience in a varsity contest.”

Game two for the Tigers was against in-county rival Pleasant Home Eagles.  Senior Tucker Livings got his first start of the year on the mound. He went 6.1 innings striking out 10, walking 6.  Freshman Parker Adams played the role of closer getting the final 2 outs to seal the victory in a very close hard fought game.

Leading the way for Pleasant Home was Jonathan Hawkins who was 3-4 with 2 RBI’s.  Frank Gafford was 2-4 with 1 RBI.  Nathan Fowler & Judd Fuqua also had 3 RBI’s each.  Ty Clark was 1-2 and scored 3 runs.  Mason Anderson was 1-3.  Pleasant Home used a multitude of pitcher’s including Nathan Fowler, Jonathan Hawkins, Mason Anderson, Judd Fuqua, and Ty Clark.  The Eagles fought hard and came up just short in the end of what was a very well-played game by both teams.

Tiger Head Coach Todd Smith stated “We got out to an early lead.  Tucker (Livings) was pitching really well.  He was working at a good tempo and throwing a lot of strikes.  I thought we were really patient at the plate early in the game.  We did a good job of hunting good pitches to hit.  We had several timely hits in the early innings and were able to extend our lead.  However, I think we may have gotten a little complacent.  We were up 11-2 and offensively we started to struggle to put the ball in play.  Pleasant Home battled back and really changed the momentum of the game.  We struggled in the last few innings defensively.  We gave up 5 errors.  On most days that will get you beat.  We were fortunate though to hang on to find a way to win.  It was a dogfight, and that is what you expect between these two teams because there is a lot of history there.  For 5 seasons we were in the same area and battling each other for the area championship.  I’m proud of our guys for hanging on and finding a way to win.  We’ll get back to the grindstone and work to get better on defense this week.”