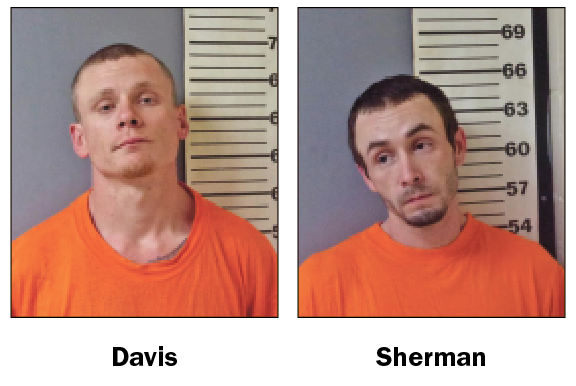 Two local men have been charged in the assault of an elderly man.

Andalusia Police Chief Paul Hudson said the APD was called to a residence on Hillcrest Drive where an elderly man hand been assaulted.

Investigators were able to identify Steven Sherman, 30, as a person of interest, and issued a BOLO for his vehicle.

Hudson said soon after the BOLO was issued, a Covington County deputy spotted the vehicle and conducted a traffic stop. Sherman was driving the vehicle and was taken to the APD for further questioning.

The APD identified Josh Davis, 28, as a second suspect and took him into custody at a residence on McClendon Avenue.

Both Sherman and Davis were charged with Assault 2nd Degree, which is a Class B Felony.  They were booked into the Covington County Jail, and bond was set at $20,000 each.

The victim was transported to Andalusia Health for treatment of his injuries and later transferred to an out-of-state hospital for further treatment.