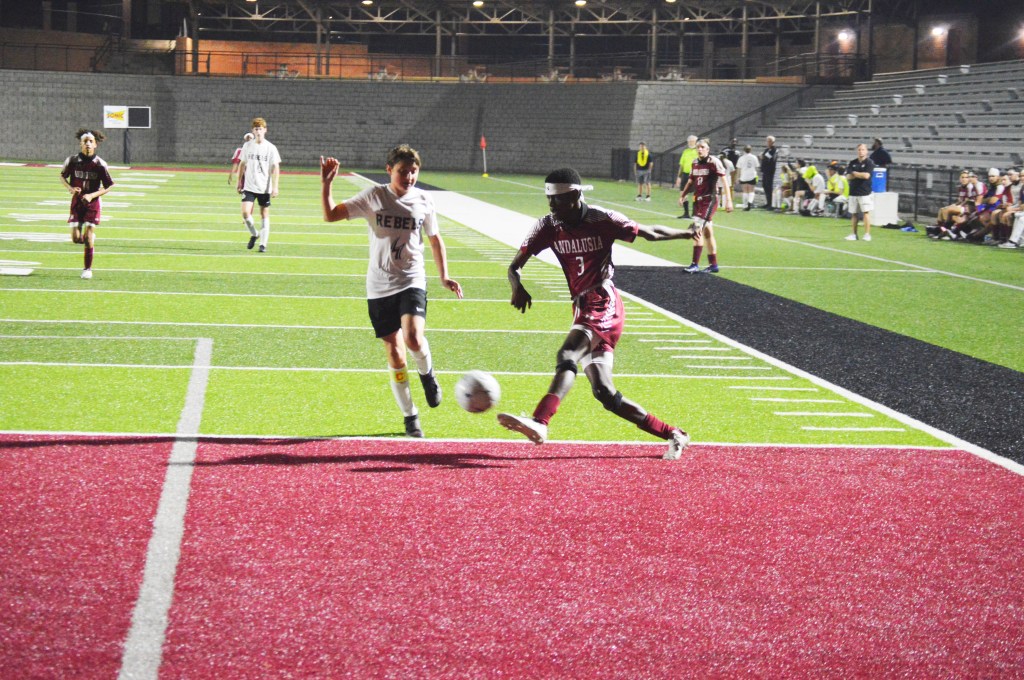 The Andalusia High School varsity soccer team is off to a hot start after dominating Dale County 7-1 and G.W. Long 9-0 on Thursday night.

After a long throw-in from Gage Theus, an own goal led to another increase in the Bulldog lead 3-0.

Theus then had a streaker sent just wide right of the goal with 10 minutes left in the half. Griffin Kennedy had another shot with 7 minutes left, but it went straight to the G.W. Long keeper.

Anna German had a shot for the Bulldogs with 6:30 left in the half, which just missed wide left.

With 1:29 left in the half, German dribbled straight through the defense and had a shot that bounced off the G.W. Long goalkeeper, but she followed up and buried it in the net to go up 4-0.

Kennedy had a shot with 40 seconds left in the half that was blocked by the G.W. Long keeper, but Xavier Hourel followed up to go into half time up 5-0.

It didn’t take but 30 seconds for the Bulldogs to score opening up the second half. Theus dribbled through the G.W. Long midfield and sent a throughball to Cason Clark who buried it in the bottom right corner of the net to go up 7-0.

On a corner kick with 29:30 left in the game, German connected with Logan Reaves who sent it past the keeper to make it 8-0.

The scoring effort for the Bulldogs ended with Caden Stewart smashing it straight through the G.W. Long keeper’s hands with 12:39 left in the game to cap it off at 9-0.

“I really feel like we did well tonight,” AHS head coach Ray Bozeman said. “We came out and we challenged the team to compete against themselves. We knew that this was a young bunch that they were going to be playing against. I told the team that every opportunity that we get, we have to make the most of it. They have to take this as an opportunity to get better and I think they did. Tonight we definitely worked on getting into shape and rotating like they should. There are still some things that we have to work on, but all in all, we did pretty well.”

The biggest thing this season for the Bulldogs is having the foresight to where the kids want to be as a team, Bozeman said.

“They have to know the sacrifice and commitment it is going to take to get to where they want to be,” Bozeman said. “On a Thursday night when we have to turn around play a game on a Friday night, they have to come out and take care of business so we can save some legs for the next game the next day. I think they know what it takes to be where we want to be and this win is just another step forward to that.”