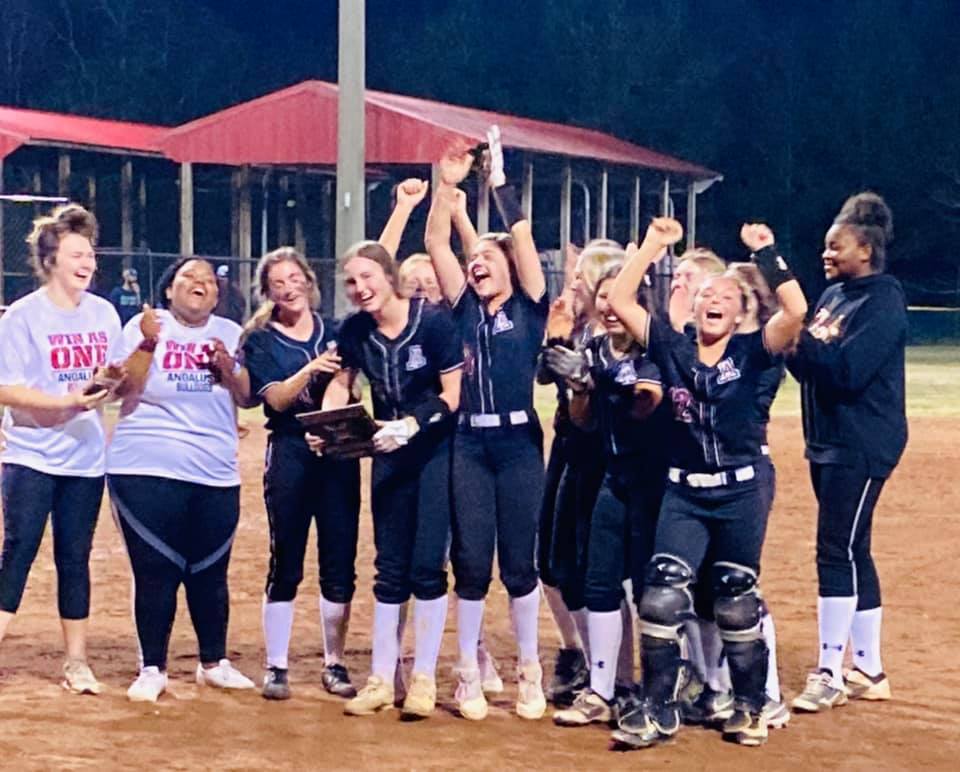 The Andalusia High School J.V. Lady Bulldogs are starting off undefeated, winning the Opp J.V. Softball Tournament this past weekend.

The Lady Bulldogs grabbed an early lead on its way to a 10-2 victory over Highland Home on Friday. Andalusia scored on a single by Olivia Cravey, a single by MacKenzie Barrow, and a single by Sara Katherine Reese in the first inning.

Cravey was the winning pitcher for Andalusia. The righty went three innings, allowing two runs on two hits, striking out eight and walking zero. Kailey Jackson threw one inning in relief out of the bullpen.

The Lady Bulldogs totaled 14 hits in the game. Cravey, Dubose, Barrow, Newton, and Jackson all managed multiple hits for Andalusia. Dubose and Cravey all had three hits to lead Lady Bullogs. Andalusia didn’t commit a single error in the field. Barrow had the most chances in the field with nine.

Kailey Jackson was brilliant in the pitcher’s circle on Saturday, as Jackson threw a no-hitter to lead Andalusia past Straughn 6-0.

The Lady Bulldogs got things moving in the first inning. Olivia Cravey drove in one when Cravey singled.

Andalusia put up three runs in the third inning. The offensive onslaught came from an error on a ball put in play by Sara Katherine Reese and a double by Taya Newton.

Jackson led things off on the rubber for the Lady Bulldogs. The pitcher allowed zero hits and zero runs over three innings, striking out seven and walking one.

Kinsley Stovall led Andalusia with two hits in two at bats. Andalusia didn’t commit a single error in the field. MacKenzie Barrow had the most chances in the field with seven.

The Andalusia Lady Bulldogs dominated 8-0 against Opp in the third game of the tournament.

In the fourth game, the Lady Bulldogs defeated Ariton 2-0.

Andalusia tallied three runs in the second inning. The Lady Bulldogs scored its runs on an RBI double by Olivia Cravey.

Kailey Jackson was in the pitcher’s circle for Andalusia. The righty lasted three innings, allowing four hits and two runs while striking out four and walking zero.

Cravey, Molly Capps, Jess Ann Dubose, and Taya Newton all had one hit to lead Andalusia.

The Andalusia Lady  Bulldogs ran off with the lead late in the game in a 9-6 victory over Enterprise on Saturday.

The game was tied at six with Andalusia batting in the bottom of the sixth when Kailey Jackson singled on a 3-1 count, scoring one run.

Both offenses were strong at the plate as the Lady Bulldogs collected seven hits and Enterprise five in the high-scoring affair.

Enterprise got on the board in the first inning. An error scored one run for Enterprise.

Cravey got the start for the Lady Bulldogs. The pitcher went five and a third innings, allowing six runs on five hits and striking out two.

Andalusia socked one home run on the day. Jess Ann Dubose put one out in the sixth inning.

Andalusia totaled seven hits. Cravey and Dubose each racked up multiple hits for the Lady Bulldogs. Dubose and Cravey each collected two hits to lead Andalusia.