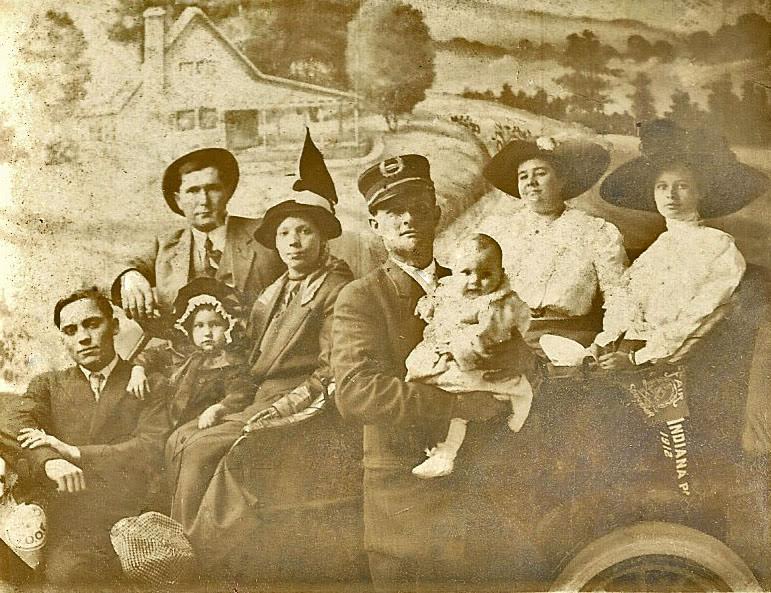 The Flournoy family of Covington County, Ala., down through the children and families of Elisha Kindred Flournoy was reviewed in last week’s column. That was with the exception of the youngest son, John William Flournoy, whose family will be featured in today’s column.

John William Flournoy was born in 1883 in the Rose Hill community of Covington County. He grew up on the family farm and attended an area school through the fourth grade. When he was about 19 years of age, he went to Opp to live with his brother, Jim, and wife, Lena Chesser. There he worked in a sawmill for a couple of years before returning to his home in Rose Hill. He went next to Bogalusa, LA., and lived with another brother, Charles, who had lived previously in Opp.  Charles was at that time the local Bogalusa Sheriff. John worked in a sawmill for one or two years before again returning to Rose Hill.

Once home, he worked by driving an oxcart hauling logs for Billy Taylor. About that time, his brother, Atticus Flournoy, and family who were living in Rose Hill came down with typhoid fever.  John nursed them back to good health, but in the process contracted the disease himself.  When Atticus and family moved later to Opp, John followed and lived with them with plans to continue his education. Their sister, Mattie Blocker, was also living in Opp at the time and operating a boarding house. After about six months of school, John decided he was too old to deal with the demands of the classroom, so he returned to Rose Hill.  His sister, Lillie’s, husband, Hance Radford, was farming the old Flournoy place, so John worked with him.

In 1909, John Flournoy was married to Bessie Caton against her parents’ wishes due to her young age. Bessie was the daughter of W.D. Caton and Florence E. Taylor, daughter of Windol Taylor.  The new couple lived with the Radfords for three months before moving across the road into a small house which they renovated. After gathering one crop, they moved in November 1910 to the Damascus community near Florala, Ala., where the Catons had already located.

In Damascus, John purchased next to his father-in-law, 40 acres with a small shack located on it which they improved.  He farmed for about six months, and then sold the property back to the original owner.  In June 1911, he and Bessie moved into Florala where they rented a house on Eighth Avenue and lived for about a year before moving to a couple of other houses in the Town.  John began doing carpentry work. His brother, Jim, who had also moved to the area was working at Hughes Grocery.

In May 1912, John and Bessie’s first child, a son, was born whom they named Q.P. Flournoy. John must have been doing some farming as he paid Dr. Galloway’s fee for delivering Q.P. with 35 bushels of corn. Afterwards John moved his small family to another residence on Eighth Avenue and he became night marshal for the City of Florala. Bessie did not like being alone at night, so they moved into the home of Annie Cawthon on North Sixth Street where they lived for a couple of years. Because the marshal job continued to be disagreeable to his family, after less than a year, John then bought a Model T Ford for $700 and began operating it as a taxi service which would allow him to be home at night.

Circa 1915, the family moved to North Fifth Street to have a house of their own and rented there about three years.  John operated his taxi service, and Bessie worked in millinery at Mrs. Hurston’s Dress Shop. They next bought a house for $1200 and moved into it on Sixth Street. Over the next 13 years, they lived there until Q.P. was 16 and the house was destroyed by fire.  During those years, John continued operating his city taxi, purchased a Jitney bus for a bus service from Florala to Andalusia, worked at a filling station, drove a bus for brother Jim between Florala and Milton, and purchased a truck for his new hauling-moving business.

In February 1922, their daughter, Martha Elizabeth Flournoy, was born. To enable her to be at home, Bessie took in sewing and boarded two local teachers.  In 1926, with young Q.P. driving, the entire family made a quick venture to Hollywood, Fla., seeking their fortune during the big land boom, but it was short-lived. In the Spring of 1929 just after Q.P.’s high school graduation, the family experienced another house burning. They then moved to a house on South Fifth Street which they bought from Mr. Hughes for $1800.  In 1937, they sold their house and purchased a South 5th Ave. lot on Lake Jackson for $400. They built their final home at a cost of $2600 with John helping with the construction.

John continued his hauling business until 1941 at which time he sold his truck and went to Mobile to work as a security guard for the Alabama State Docks. He was there for a few months before becoming ill and returning to Florala. During this time Bessie was sewing and working part-time in a funeral home.  John worked a few months in the war time Panama City ship yards and subsequently returned to Florala to sell real estate and do odd jobs. Bessie further developed her talent for working with flowers in Sue Powell’s Florist in 1948. Then in 1950, she and John built their own Florist shop behind their house. They operated it until 1956 at which time they sold the business and retired. John died in 1965 and was buried in the Greenwood Cemetery in Florala.

Q.P.’s wife, Alice, was from the Antioch community which is northeast of Andalusia in Covington County. The couple lived in Florala until moving to Mobile in 1939 for Q.P. to work as a pipe-fitter with Aluminum Company of America (Alcoa). While living nearby in the Town of Chickasaw, Q.P. became Mayor and served from 1952 to 1956. In 1957, he transferred with Alcoa to Point Comfort, Tex. as a mechanical supervisor. He retired in 1974 and returned to Florala to care for his widowed mother, Bessie. He died at the Florala home place in 1990 and was buried in the Greenwood Cemetery.

Ronald attended high school and college in Texas. He earned a chemical engineering degree from Lamar State College of Technology and worked with Alcoa as his father had. He and his wife, Pam, are the parents of two daughters. One daughter, Stacey, b. 1968 in Little Rock, Ark., m. 1991 Gregory Wynn.  Stacey graduated in 1990 from Texas A&M University and had a career in Public Elementary Education before becoming a full-time homemaker.  The Wynns reside in Port Lavaca, Tex. and are the parents of two daughters, Sarah Elizabeth, b. 1995; and Ashley Ray, b. 1997, both born in Victoria, Tex.  Ron/Pam’s second daughter, Melissa, b. 1970 in Little Rock, Ark., m. 1993 Richard DeMouy. Melissa graduated in 1992 from Southwest Texas State University and worked in banking for a number of years before becoming a full-time homemaker. Her husband, Richard, had a career in the United States Air Force as a security officer before retiring in 2017. They are the parents of a daughter, Abigail Kay, b. 1998 in Grand Forks, N.D.; and a son, Justin Wayne, b. 2004 in Montgomery, Ala., who lives with his parents in San Antonio, Tex.

John Charles attended high school and college in Alabama.  He graduated from Auburn University in 1959 with a Business degree and a commission in the United States Air Force.  He served for 29 years as a Rescue Helicopter Pilot.  He and wife Charlene are the parents of three children, Jamie Lynn, b. 1959, John Charles Jr. “Jay,” b. 1962; and Jeffery Allan, b. 1965.

The descendants of the Flournoy family are very proud of their heritage. Several have done extensive research and observed memorial ceremonies. One was the occasion of dedicating a headstone at the grave of Elisha Kindred Flournoy, a proud Confederate Veteran, at his grave in the Rose Hill Cemetery.  Bessie, Q.P., and Alice were proud members and supporters of the Masonic Order of Masons and Eastern Star.  For years, Bessie dressed in costume for the annual Florala June Masonic Celebration and Parade.

The source for today’s story was the family records of Ronald “Ron” Flournoy, a descendant who resides in Texas.