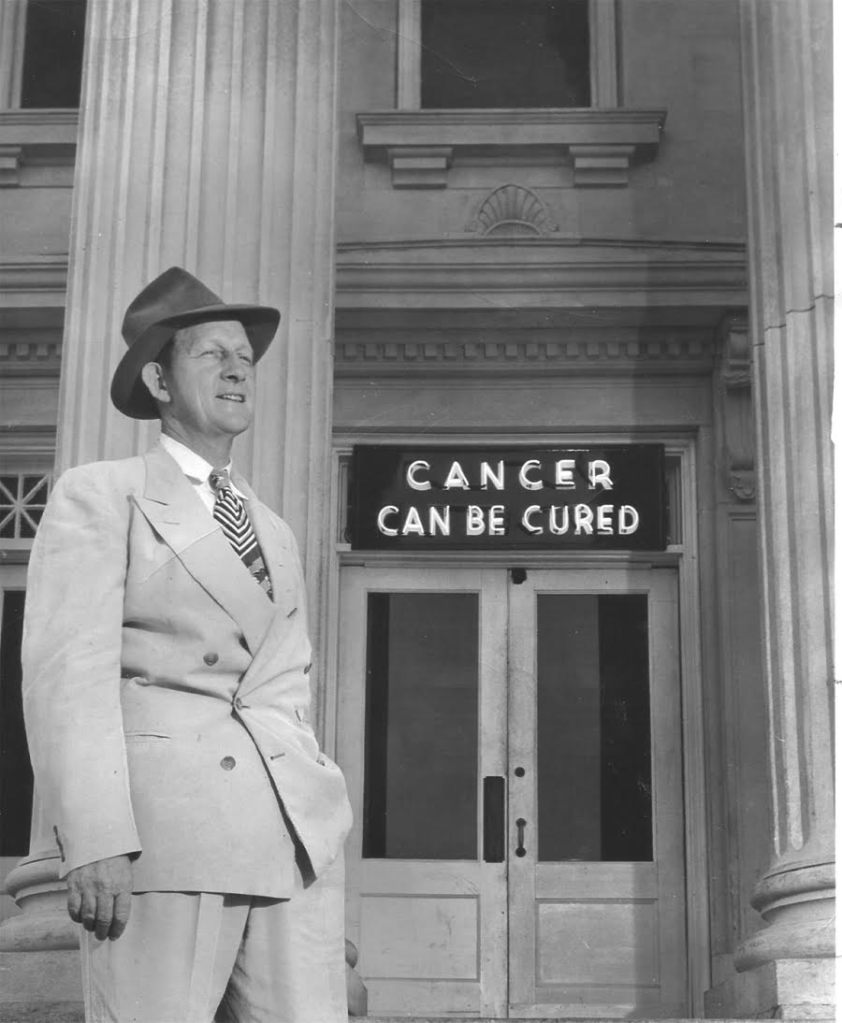 In 1949 a local Andalusia attorney and insurance adjuster Ed Reid partnered with the Parnassus Club to promote “cancer awareness.” He had had cancer and learned of the fact early enough to secure medical treatment that brought a complete cure. Reid recognized that in the great majority of cases where an individual is stricken with cancer, the disease many times takes a relentless hold before the victim can take corrective steps. Because of this, he began a “one-man crusade” becoming what some people called a “missionary” who preached the gospel of cancer cure.

Reid went to school assemblies with his program of “The Seven Warning Signs of Cancer.” He and his wife Gladys flew to many states including Hawaii where he spoke on the wonders of medical science that sometimes results in cures of cancer especially with early detection. Numerous 1950s articles appeared in The Andalusia Star News naming the cities that the Reids traveled to lecturing to groups to promote the cause. Publicity by radio as well as press focused on the theme that early treatment brings cure.

Even in Andalusia, Reid produced a movie filmed under his supervision with local cancer survivors who gave testimonies to the importance of early detection.

In 1949 and 1950, Reid was saluted by the American Cancer Society as “Man of the Year” for the State of Alabama for meritorious service. He became a nationally known figure in the warfare on cancer. Dr. Alton Ochsner from the Ochsner Foundation Hospital in New Orleans came to town to bestow awards to Reid. They became very close friends and Reid was named to the Board of Governors of the foundation dedicated to finding an effective cure for all types of cancer.

In February 1960, Ed Reid passed away suddenly. Death was attributed to heart failure stemming from shock that followed in the wake of a fall in a shower bath when he suffered a severe blow on his head and was scalded as steaming water filled the tub. Treated at Covington Memorial Hospital, he was later flown by chartered airplane to the Ochsner Foundation Hospital where he died a short time later.

Newspaper accounts reported, “There is no way to accurately total the number of hours Ed Reid has spent at the bedside of cancer victims to bring a word of cheer and to explain there is hope. No one knows how many miles he has traveled to reach in person sufferers from the cancer plague so they could have the benefits of a face-to-face, heart-to-heart talk and words of encouragement to submit to treatment promptly without delay. His fellow citizens of Andalusia and Covington County take pride in the fact that his tireless and unselfish work has attracted appreciation beyond the bounds of local communities and reached throughout the state and nation.”

“Never Alone” was the educational film that included the Covington County story. It depicted the work of the American Cancer Society in educating the public to the fact that cancer can be cured. The movie was shown to club groups, school children, at the county fair, and to other civic organizations. Narrated by Jeff Chandler, the film featured personal testimonies of Mr. and Mrs. Ed Reid, Mr. and Mrs. Ernest Spicer, “Rabbit” Simmons, Mrs. Hugh Broadhurst, Mr. and Mrs. Donald Cooke, Curtis Barrow, Richard Morris, Hannah McGee, and Editor Ed Dannelly.

After Reid’s death, some of those who had taken part in the movie gathered on the steps of the Covington County Courthouse in 1962 to formally dedicate the neon lighted sign hung above the main entrance door. It read, “CANCER CAN BE CURED.” This sign was intended as publicity to generate interest in the cancer fund drive. It hung there for many years.

As you readers may notice from the picture attached, the doors of the courthouse are different now. They were changed out and modernized a few years ago as were the Georgian architectural feature panels that now make their home at the Three Notch Museum. Apparently the sign was removed at that time as well. So far, searches in the courthouse basement and attic have been unsuccessful in finding the sign. No one remembers. Maybe some reader can shed light on this “mystery” as we Remember When this distinguished citizen Ed Reid brought national recognition to Andalusia and Covington County. Do you know “The Seven Warning Signs of Cancer?”

Preserved at the Andalusia Public Library is a large scrapbook with heavy wooden covers made by the Parnassus Club which contains the memorabilia in 1949 of their cooperative work with the Reids. Andalusia can take pride in this devoted citizen who made much progress along with this ladies’ civic club who supported these efforts in cancer awareness that still continues by the American Cancer Society today. 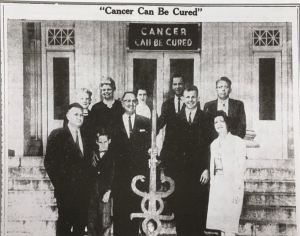