GERMAN SIGNS TO PLAY SOCCER AT THE NEXT LEVEL 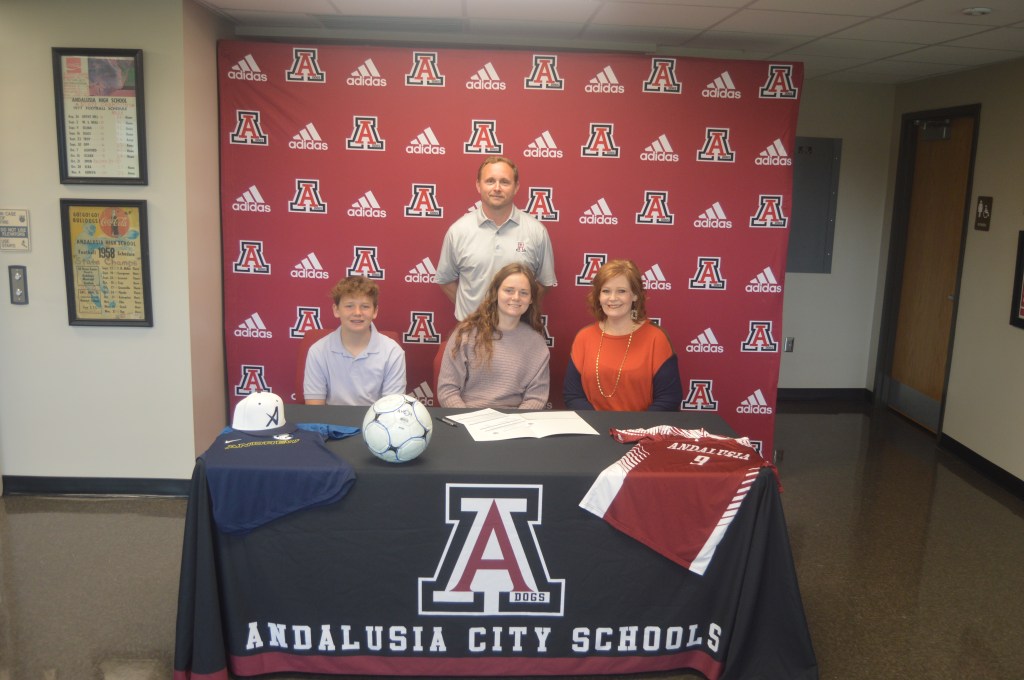 Andalusia High School senior Anna German has signed her letter of intent to play soccer at Andrews College in the fall.

German has been playing soccer since she was four years old, growing up playing in the Andalusia recreation league.

“I knew from a young age that I wanted to play at a higher level,” German said. “I just love soccer.”

Andrews College was the first university to express interest in German, which is why she said it was one of the main reasons she chose them.

“I went on a visit to the college, and I really liked it,” German said.

German is in the middle of her senior season of soccer and she said she wants to go out with a bang.

“I want to win the state championship,” German said. “After that, I will start practicing more and getting ready for college.”

AHS head coach Ray Bozeman said he doesn’t know of another player that has the strength of German.

“As far as what she can handle and what she is capable of, I have not met another young woman as strong as her,” Bozeman said. “She is real easy going with tons of composure and the way she carries herself is rewarding as a teacher and a coach to know a kid like that. As far as her work ethic and attitude, she has always been willing to do everything that I have asked her to do and then some. The biggest thing about Anna is that she is a leader, but she does it quietly.”

With German being one of the only girls on the Andalusia soccer team, Bozeman said there are moments where he has worried about her physicality, but she has proved him wrong every time.

“Just because of the physicality of the game, I have been worried sometimes,” Bozeman said. “But as far as her being able to handle it, she has instilled in me a confidence years ago, just by what she has put up with. There are definitely times when the dad comes out in me when I have been worried and I get protective, but I think that is why she and I have the coach and player relationship that we do.”

German plans on studying sports medicine in college. She is the daughter of Heather and the late Terry German.