REMEMBER WHEN: 1946 Happenings in Andalusia 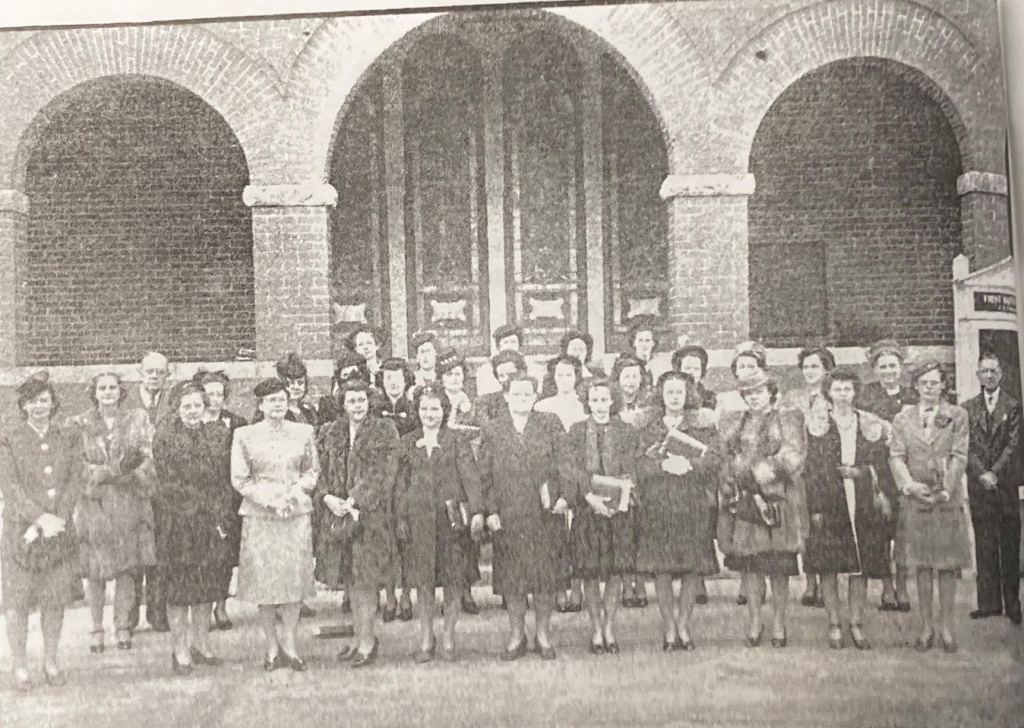 Springtime in Andalusia in 1946 – This is the time my husband was born. Perusing the old newspapers from March and April 1946 helped me to get the feel of the community back then. Let me share some news from then from The Andalusia Star.

“AHS OPENS BASEBALL SEASON – Games to be played on the AHS Athletic Field east of the main building.  (Readers, this was prior to the building of the Andalusia Municipal Stadium in 1950.)”

“BIG JIM FOLSOM VISITS COVINGTON – Folsom spent last Thursday in Covington speaking at Florala, Opp, and Andalusia in the order named. He came with his string band and shuck broom and wooden buckets plus all the additional trimmings that are attached to his program of speech-making, music, and fun. He had crowds because folks like to hear and see the candidate who has a colorful program. No doubt, he will get a large vote in the primary election.”

“FOR SALE – 5-room house and 6 acres of land located 7 miles west of Andalusia. On the school bus and mail route. House wired for lights. Call 632. (The real estate ads are a little

different than 75 years ago!)”

“DAYLIGHT SAVING TIME – Dear Editor Duggar, You have no doubt noticed that the governor is considering the advisability of observing Daylight Saving Time during the summer months beginning April 28. I am very much in favor of this move and so are all the employees of the bank. I have discussed this with several of our business men, and they are all in favor of it. If

DST is adopted, it will allow all of us who are employed to have an extra hour in the afternoon to fish, play golf, work in our yard, or any other recreation we might seek. Why not publish something about it in your next publication and ask everyone that is interested to address a letter to the governor to give it favorable consideration. Yours very truly, E. E. Anthony, Pres. Commercial Bank.”

“BULLDOGS WIN FIRST BASEBALL GAME OF THE 1946 SEASON by rolling over Brewton’s T. R. Miller High School with a score of 6 – 0. The Bulldogs will take on the Straughn High Nine Tuesday afternoon at the Andalusia High Athletic Field.”

“NEW LITERARY CLUB – 30 members of Andalusia’s younger set met on Friday at the home of Mrs. Byron Hair to perfect the organization of a new club to be known as the Synosure Club which was sponsored by the Mentor Club. Officers were chosen and committees established included Finance, Welfare, Library, Program, Press, and Telephone. Mrs. Lester Thagard was elected president. The hostess served a delightful salad course with iced tea at the conclusion of business.”

“SKYWRITER TO FLY PLANE OVER ANDALUSIA – Skywriter Cecil Coffrin whose plane will be zooming over Andalusia and surrounding territory writing ‘PEPSI-COLA’ in the sky beginning on or about the 15th of April is announced by Mr. Turner of Pepsi-Cola Bottling Company of Luverne, Ala. Coffrin has returned to his peacetime job after more than two years in Navy Ferry Command from which he was honorably discharged with the rank of Lieutenant Senior grade.”

“LIONS CLUB MAKE $1,000. DONATION TO START FUND FOR PARK, POOL FOR ANDALUSIA – Following the regular luncheon meeting of the Andalusia Lions Club, the members voted unanimously to make a donation of $1,000. for a playground and swimming pool ‘to get the ball rolling and make this much needed playground a reality.’”

“PICKETERS MARCH IN FRONT OF THE ANDALA COMPANY – For the past several days, the singing, yelling, and screaming of the picketers has continued unabated since the outset of the strike. Workers have been bearing placards on which were written ‘We Want Higher Pay.’ Strikers have caused some excitement and confusion since a strike is something new in this city, and the people had a curiosity to see just what it is like. Andalusia’s economic life was developed not by walking but by working. No outside influence however strongly financed can tear down what we have been many years building. Better days are ahead for all of us and particularly for those with a will to work and to behave in a decent manner. These ‘foreign’ agitators and organizers sent here by the ACWA (CIO) have tried every trick of their trade in an effort to force a majority of the employees of the local textile plants to walk off their jobs, but these workers realizing they had everything to lose and nothing to gain by so doing have steadfastly remained at work. The management of these plants has met each move with a courteous, fair yet firm stand.”

“4-H CLUB RALLY IS LARGEST EVER HELD IN COVINGTON COUNTY – The first 4-H Club Rally to be held in 5 years was  held in Andalusia last Friday, April 12th. World War II had caused the Extension Service of this county to suspend the annual event, but with the first year of peace, the biggest of club days was made a reality again. Seventeen schools were represented including Babbie, Beulah, Blue Springs, Carolina, Chapel Hill, Falco, Lockhart, Midway, Opp, Opine, Pleasant Home, Rawls, Red Level, Rose Hill, Sanford, and Straughn. Upon terminating all the contests at the East Three Notch School playground, a parade was held from the school up and around the Court Square and into the Martin Theatre auditorium with each club parading behind its 4-H Club banner. The awards were presented and then a movie, ‘State Fair,’ was shown to the group free of charge. The end of the show found the boys and girls boarding the buses and heading back to their schools and classes.”

“THE ANDALUSIA STAR CHANGES HANDS; SALE EFFECTIVE TODAY – Editor Oscar Duggar has sold his interest in the newspaper to Mr. Byron Vickery and Mr. W. F. Locke who have formed a partnership with plans to take over the business. Both young men are native Andalusians and need no introduction to the great family of Star patrons. Duggar stated, ‘I have spent forty-five years as owner and editor of newspapers in Greenville, Tennessee for 16 years and the remainder here in Andalusia. I have been on the job constantly with practically no vacation during these four and one-half decades always looking forward to the time when I might turn loose and take a long vacation. That time has never come.  Hence my only way out seemed to me to be to sell out, and thus free myself from the ever-taxing responsibility. I have made no plans for the future except that I shall take several weeks’ vacation after which time I shall decide as to just what channel of activity I shall enter. Be assured that I do not have an exalted opinion of loafers, and I do not intend to become one.’”

Duggar was honored in May 1946 by the citizens of the community with a surprise program at the East Three Notch School Auditorium. About one hundred fifty of his close friends were present along with representatives of the county and city government as well as the presidents of each civic club. Mr. Robert Albritton presented Duggar with a large sterling silver bowl with matching candle holders as a gift in token of the esteem and affection of Andalusia citizens.

“RECREATION AND OUR CHILDREN – The summer vacation which so many of our city’s children have long awaited is just around the corner. And what do we have in the way of recreation to offer them? Nothing, absolutely nothing.  A city with the progressive spirit that is ours can and should plan and execute supervised play for its own. These children’s character will be molded by their environment and what better can there be than a supervised public playground, a wading or swimming pool, playground equipment, softball facilities, and other numerous things which can mean so much in the building of these children into the citizens to whom we will some day look for leadership.”

“GO TO CHURCH PROGRAM GETS UNDER WAY IN CITY – A program sponsored by the Andalusia Junior Chamber of Commerce (Jaycees) as an endeavor to attain a greater attendance at all of the Andalusia churches begins this week. The church of your choice extends to you an invitation to attend any or all of its services and promises a heartfelt welcome to those who join them in worshipping the King of Kings and Lord of Lords. (The same applies today. All are welcome to attend Palm Sunday and Easter Sunday at the church of one’s choice.) ”

Well, this gives us a glimpse into the past of Andalusia in 1946, the year following 1945, the end of World War II. I wish a Happy Birthday to my “baby boomer” husband Jimmy Wilson born March 29, 1946.

Maybe some of the city’s senior citizens Remember When some of these events mentioned above happened. Many events, clubs, celebrations, rallies, and programs were just getting established back then and are continuing today. It makes me proud to be from Andalusia and especially to welcome newcomers to this place we call home… and they will, too.