Wesley Thomasson family and the children made homes in Andalusia 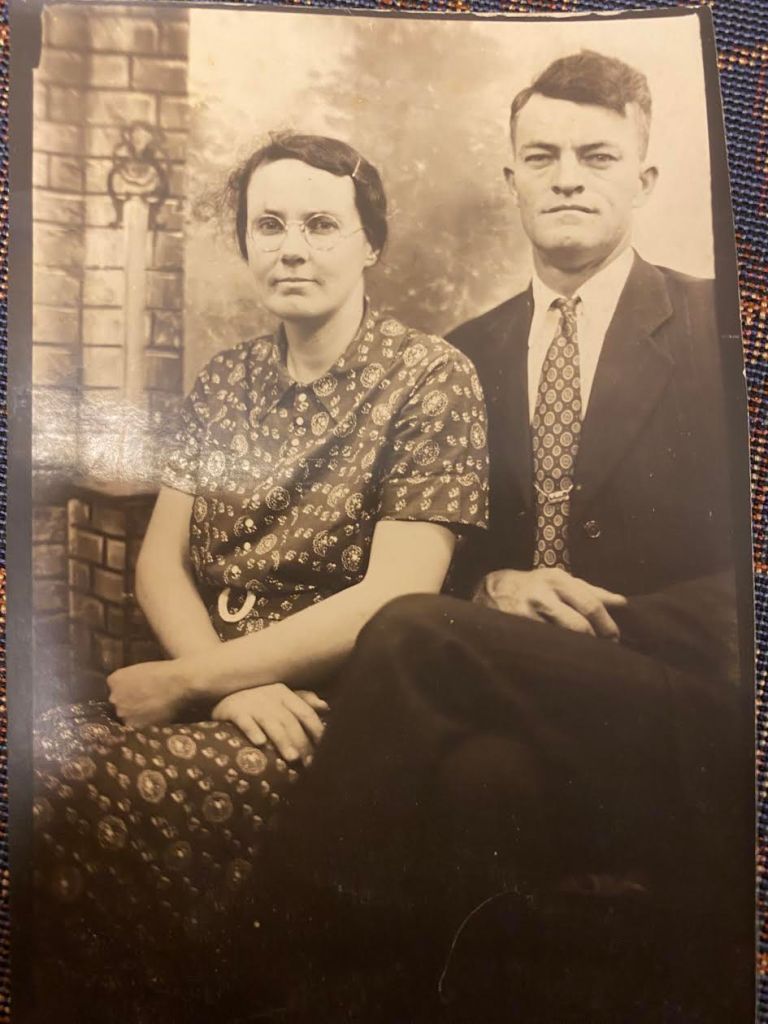 The oldest son of James Franklin Thomasson and Cynthia Beulah Sasser, James Wesley Thomasson, and his family will be the subject of today’s story. Wesley’s early years were outlined in last week’s column.  The tragedy of his mother dying at age 31 when he was only 8 years old was also described. He was the second oldest of the seven young children left at their mother’s death. Wesley was born in 1905 either in the Burnout or the Antioch community.

Wesley’s family moved around to different farms for several years before settling in the Cedar Grove Church of Christ community a few miles southwest of Andalusia. His dad had made crops in Antioch, Heath and south of the Carolina community where he taught his five sons how to work and manage a farm. Wesley and his siblings attended the nearby Adellum School where he completed the seventh grade. The children also began to attend the nearby Cedar Grove Church of Christ with neighboring friends.

Wesley became friends with one of the young ladies, Ruby Evelyn Stokes, daughter of Leland Congdon “Lee” Stokes and Callie Alabama “Bama” Fuqua, and they were married on October 1, 1925. Ruby was born in 1910, and she attended Adellum School where she completed the eighth grade. The couple began their marriage in a small house on her father’s property, and even as a young bride at 15 years of age, she knew how to manage a home.

As a respectable daughter, she continued to assist her mother, and they did nearly everything together such as sewing, quilting, canning, etc., the many activities typical of a farm home. She made beautiful quilts, embroidered scarves, crocheted doilies, tatted lace and kept her simple home attractive and in neat order.

Wesley farmed some and later went to work as a truck driver for Sessoms Grocery Company where he worked for 17 plus years. During that period of time the family resided at 607 Riley Street in Andalusia. He then decided to return to farming and in 1943 purchased a small 120-acre farm just south of Andalusia. The property, currently located on Blake Pruitt Road, had about 50 acres in cultivation and the rest was timberland.

Tragedy struck the family in 1953, when Ruby lost her life to cancer at the young age of 42. She bravely battled the illness for a year with her mother coming every day to help care for her during the difficult year. Later Wesley was married to a widow, Ethel (Barfoot) Folmar, whose husband had also died of cancer. Wesley and his two younger sons moved to join Ethel and her son, Billy, in their home in the Heath community. Wesley returned to truck driving for Andalusia Grocery Company, which he continued until his retirement in 1965 due to failing health.

James Wesley and Ruby (Stokes) Thomasson were the parents of four children: Audrey Belle, b. 1930, m. Roy Medford Wilson; James Leland, b. 1934, d. 1992, m. Miriam Charlotte Kelley; Curtis Hampton, b. 1940, m. Marjorie Lou Jacques; and Kyle Ray, b. 1945, m. Carole Nancy LeRoy. The parents and all their descendants are members of the church of Christ. All three sons and the son-in-law have served as deacons and elders of the church, and Leland and Roy preached at times for smaller congregations.

Audrey was graduated from Pleasant Home School in 1948 and secured employment as a bookkeeper for Sullivan Furniture Store. After a short time, she was employed by the Commercial Bank which later became First Alabama and then Regions. She was employed there for 47 ½ years during which she worked as a teller, auditor and retired as an assistant vice-president in 1995. Roy worked for years as an auto mechanic and then with General Telephone Company with which he advanced to the central office.

Roy and Audrey are the parents of a son, Roy Christopher Wilson, who was born in 1956. Chris earned a degree in electrical engineering from the University of Ala. and worked in several states before retiring in 2018 and settling in Murfreesboro, Tenn., near their daughter. He was married in 1976 to Mary Jean Adams, daughter of Joel Edsel Adams and Lyra Langford of Andalusia. They are the parents of two children: Meredith Rene, b. 1980, m. Adam Keeton; and Matthew Christopher, b. 1981, m. Stacey Lynn Sexton. Rene and Adam have careers in education and have two children: Adalin Marie and Lincoln Wilson. Matt is a youth minister and Stacey, a nurse practioner, and they have four children: Matthew Corbin, Christopher Cooper, Caylie Lynn and Cason Roy.

The oldest son, James Leland Thomasson, was born in 1934 and grew up learning all kinds of farm work. He attended Carolina School and later Pleasant Home where he was graduated in 1952. He excelled in basketball, and he drove a school bus which his dad owned during his senior year. He did various jobs after graduation and played for the Andalusia Arrows, a semi-pro baseball league. He was drafted into the U.S. Army in 1956, served two years, and was recalled in 1959. His last tour of duty was stationed at West Point, N.Y.  Upon being discharged, he and his wife returned to Andalusia where he was employed with General Telephone. He retired from that company as Plant Supervisor for Customer Equipment in 1990.

Leland was married in 1954 to Miriam Charlotte Kelley, daughter of William Allen Kelley and Era Velt Hall. They made their home in Andalusia and became the parents of three children: Leland “Lee” Wesley, b. 1961, d. 1965; Charlotte Lisa, b. 1965, m. 1985 Vernon Bell Taylor; and Miriam Kelley, b. 1973, m. 1998 Robert Bradford Garris. Lisa and Vernon were graduated from Auburn U. with Vernon as a 2nd. Lt. in US Air Force. After his retirement from being owner of Universal Turbine Parts, they reside in Montgomery and are the parents of three daughters: Emily Catherine, Charlotte “Carly” Evelyn, and Julie Bell, m. Jacob Hill. Kelley and Bob were graduated from Auburn U. and Bob earned a degree from Jones Law School. They reside in Auburn and are the parents of four children: Leland “Lee” Bradford, James Knowlton, Annabelle Kelley and Thomasson Hall.

The next son, Curtis Hampton Thomasson, was born in 1940 at home on Riley Street. When he was three, his family moved to a small farm just south of Andalusia. He attended Carolina School through the eighth grade and the first six weeks of the ninth at Pleasant Home School. When the family moved to Heath at that time, he attended and was graduated from Straughn School in 1958. Through the encouragement and assistance of his senior English teacher, Gertrude (Powell) McCusker, he attended the University of Ala. from which he earned a degree in biology with teaching certification. He taught three years in Tuscaloosa City Schools and completed his masters’ in counseling and guidance. He taught and served as counselor at Andalusia High School for four years before joining the staff of the new Lurleen B. Wallace St. Jr. College in Fall 1969 where he served as director of counseling for 27 years before retiring in 1996.

Curtis was married in 1969 to Marjorie Lou “Margie” Jacques of Okolona, Ark., daughter of Calvin Floyd Jacques and Mary Conway Power. The couple met in 1967 during a Campaign for Christ in Frankfurt, Germany. They made their home in Andalusia, and Margie served as director of the new Andalusia Public Kindergarten for three years before becoming a full-time homemaker. After the children were older, she taught at Red Level School and then Pleasant Home School from which she retired.

Curtis and Margie are the parents of three children: Curtis “Curt” Jacques, b. 1972, m. Heather Lee Ann Graves; Christy Lane, b. 1973, m. Andrew Brian Clanton; and Clay Hampton, b. 1975, m. 2011 Carrie Elizabeth Turner. Curt is an electrical engineer in Jasper, Ala., and has two sons: Tyler Graves and Peyton Jacques. Christy is a kindergarten teacher at Andalusia Elementary, and Andy is in construction. They have two sons: Matthew Hampton and Chappell Thomasson. Clay is a building superintendent in Savannah, Ga., and has two children: Turner Hampton and Louanna Caroline.

Kyle Ray Thomasson, the youngest child was born at home on the farm in 1945. He attended Carolina School through the second grade and then transferred to Straughn School from which he was graduated in 1964. He attended his junior year at Tuscaloosa High School while living with his brother, Curtis. After high school he attended the George C. Wallace St. Tech. College in Dothan for machinist training. After a year, he enlisted in the U.S. Navy and after basic training spent the remainder of his four-year tour operating a machine shop aboard the U.S.S. Fulton, a submarine tender based in New London, Conn.

Kyle met his future wife, Carole Nancy LeRoy, daughter of Eugene Robert LeRoy and Doris Mae Farber, while in New London. They were married there in 1967 where they lived until he was discharged in 1969. They returned to his home of Andalusia where he operated the Moore Road Machine Shop with his uncle, L.C. Stokes. He later opened his own machine shop next to his residence on Blake Pruitt Road. He retired a few years earlier, but he still enjoys keeping busy in his shop. Carole worked for years as an office assistant including legal secretarial work.

Kyle and Carole are the parents of two children: Jennifer Holly, b. 1971, single, employed with the State; and Kyle Wesley, b. 1975, m. Abby Lynn Walters. Wes, a mechanical engineer with Power South, and Abby, office manager for Andalusia Dental Group, have two children: Kylie Elise and Porter Wesley.

Clement and Ora Hare reared their family in Florida…