Sneed to become first male cheerleader at AHS in 60 years 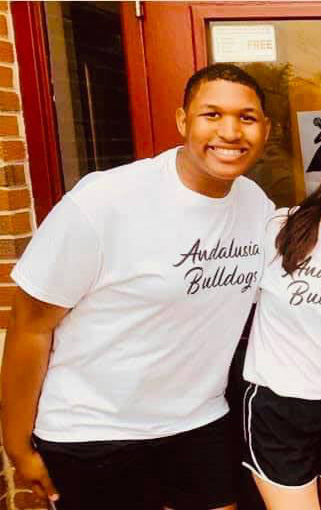 After 60 years of an only female cheerleading squad at Andalusia High School, junior Omarion Sneed is breaking down the barrier by making the roster as a male cheerleader.

For the past three years, Sneed has been the man behind the Bulldog head as the mascot.

“It is pretty exciting,” Sneed said. “It is a change for Andalusia High School. We have so many great traditions, but hopefully, I will be able to open the door for the next generation of students to be able to do the same.”

After being mascot for the last three years, Sneed’s peers pushed him to try out for cheerleader.

“I had several people tell me that I should try out,” Sneed said. “Even Dr. Shakespeare said the same.”

Sneed said the feeling of family is what excites him about being a cheerleader.

“To be around the squad is pretty fun,” Sneed said. “We have become a family and we have so many different things that we do, like team bonding.”

For the children that may want to become a male cheerleader, Sneed advises them to focus on what they think will be fun.

Throughout the process, Sneed said people have supported him.

“My family members have told me that if I enjoy doing it then do it,” Sneed said. “My peers have motivated me, and Candace Smith and a lot of the other teachers have done the same.”

In the fall of 2021, Sneed will be cheerleading, as well as playing the trumpet in the Sound Tradition and being mascot.

AHS cheer sponsor Candace Smith started with the cheer squad in November and she said she immediately saw something in Sneed.

“When I took over in November I noticed a ‘drive’ in Omarion that you don’t see a lot these days in many people,” Smith said. “Omarion is a go-getter. He sees what he wants and he doesn’t stop. He is passionate and persistent. He did not let obstacles or obstructions interfere with his dream. He would practice with the team every single day, despite the fact that he was just the mascot at the time and wasn’t required to show up to practice, yet he was still there, learning and experiencing the cheer side of things. He was always willing to try new things and step in to help stunt when we had girls absent. He learned a lot as his time as the mascot and took that knowledge and applied it when the time was here to shine. I am very blessed to get to be a part of his first year cheering and hopefully he can continue this dream into college.”

After high school, Sneed hopes to earn a bachelor’s degree in broadcasting.

He is the son of Phillis Johnson and Evan Sneed.