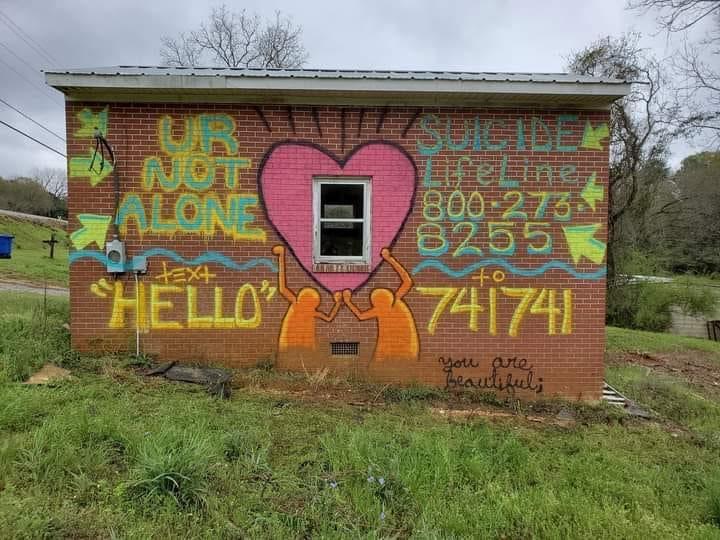 A house in the Red Level Community has been painted with a mural on the side for parents and students to read as they go to school. The mural says, “UR NOT ALONE” with the Suicide Hotline painted, as well.

After hearing about three students from Red Level Schools committing suicide, Carolyn Evans knew awareness about the subject needed to be raised.

“My son committed suicide at the age of 24,” Evans said. “There have been three children in the last three years that have committed suicide and every time they do, I just feel like no one does anything in this city to help stop this. They don’t even help the children, who are stressed out and don’t know which way to turn.”

Evans said she has wanted to paint the mural for years.

“My daughter came down from Chicago and she has always been pretty artistic,” Evans said. “We got together and decided that this is what we wanted. I’m sure there are so many people who have wanted to do something but just didn’t know which way to turn. Every time I heard about somebody killing themselves I felt like I let them down personally.”

If one child sees or texts the number, Evans said it would all be worth it.

“If your child is telling you that they are miserable and don’t know what to do, if they are showing you that they are going to hurt themselves in any way, please get them help,” Evans said. “My son refused to get help. He was 24 and there was nothing I could do. I was helpless. In the state of Alabama and Florida, at least you can have them checked out and analyzed. I just feel like you need to pay a lot of attention to your kids. Suicide is so unpredictable and kids quietly plot. You just have to know your child. I knew my son would commit suicide and I tried to get him help, but he refused the help.”

If you or anyone is thinking about suicide, please, contact 800-273-8255 for the Suicide Prevention Lifeline.