Reedy and Eva Thomasson made their home in the Heath community 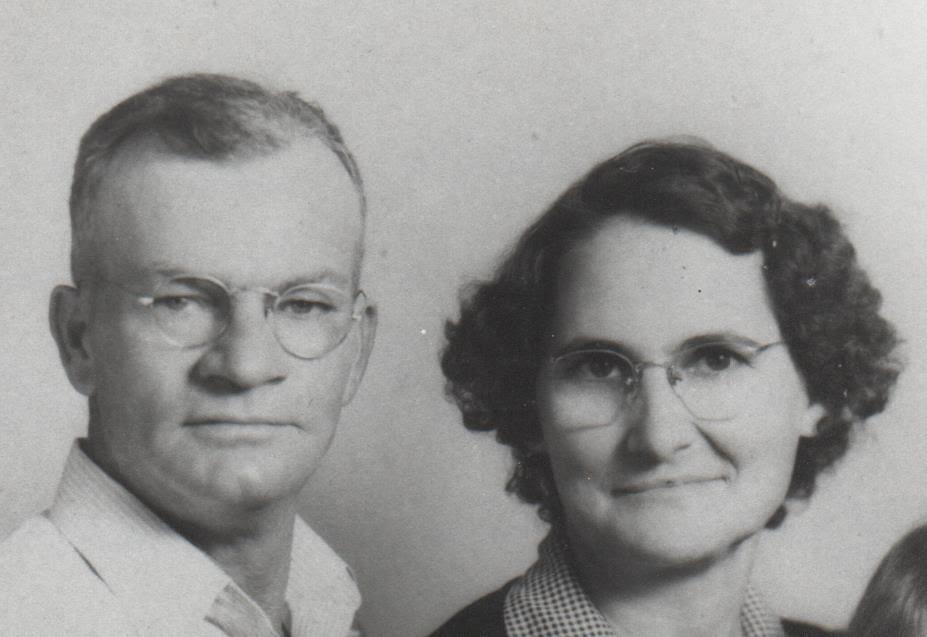 Reedy Vester Thomasson, the third son of Frank Thomasson and Beulah Sasser, was born in 1907 in Andalusia and died there in 1963 at the relatively young age of 56. He grew up on his dad’s farm and did that type work most of his life. He attended Adellum School and met a young lady, Eva Mae Thompson, whom he married in 1927. Eva was the daughter of J. Lucious Thompson and Lula Sara Thornton of Opp, Ala. In addition to being a devoted homemaker, she worked for about 30 years at Alatex, a local sewing factory.

Reedy and Eva made their home in the Heath community on property his Grandfather Thomasson had owned earlier. He farmed most of 80 acres there and grew vegetables and especially watermelons to peddle around town. The melons were probably Georgia Grays from seeds his father had saved for generations. In later years, he operated a fruit/vegetable stand in front of his house at the intersection of Straughn School Road with US 29. Reedy loved his family and had a kind disposition with a ready willingness to help anyone in need. He became a leader in the Heath Church of Christ which was in site of his house. He and Eva reared their children to be faithful members as well.

The first child, James Vester Thomasson, their only son, was named for his father and grandfather. He was born in 1928 in Andalusia and grew up on his father’s farm. In 1950, he was married to Christine Jay, daughter of Aaron H. Jay and Mary Ethel White. He served 14 months in the U.S. Army during the Korean War and became a Corporal in the 30 Ord Heavy Maintenance Co. He was discharged July 12, 1956, at Ft. Jackson, S.C.

Lynn and Larry Call Sr. reside in St. Mary’s, Ga., where she retired after 33 years as a school bus driver, and Larry, after 38 years as a machinist supervisor for US Navy. They are members of the St. Mary’s Church of Christ and are the parents of three children: Lisa Michelle, b. 1975, m. (1) Jonathan Dale Thrash (2) James Risher (3) Raymond Michael Plezia; Larry David Jr., b. 1977, m. Angela Marie Joyner; and James Reedy, b. 1980, m. Carol Ann Thomas.

Aaron and Jennifer Thomasson have two sons: Hudson and Hank. Crystal and Dustin Dunlap have five children: Joseph Michael, Bradley Ray, Kayla Suzanne, Hunter James and Austin Lamar who are twins. Joshua, who has a degree in computer science from U.W.Ala., works in that field at the university. He and Laurice Thomasson have four children: Mathew Edwin, Andrew Lee, Sophia Marie and William James. Jessica has a degree in accounting and is a full-time homemaker. She and David Paulk have four children: Gabriele Brennen, Zane Ethan, Seth Kayden and Isabelle Delilah. Pamela and Christopher Clink have four children: Christopher Lee Jr., Crystalynn Marie, Lillian Jean, and (adopted) Timber Leann Raine Back.

Sandra and Johnie Blaich, son of John Edgar Blaich II and Mary Vernell Edwards, live in Panama City. She is a data clerk at St. Andrew Elem. Sch., and he is retired from work at West Rock Paper Mill. They are the parents of two daughters: Brittney Joy, b. 1984, m. Michael Andrew “Drew” Kelly; and Bridget Nicole, b. 1985, m. Justin Dale Odum. Brittney and Drew reside in Alex City with their two children, Blake Andrew and Harper Grace. She has a B.A. degree from FSU and a M.A. from U.of Ala. and is a guidance counselor at Jim Pierson School. Drew has a B.A. in accounting from AU and is working on his masters. He serves as a deacon at Alex City Ch. Of Christ and works as an auditor with the local transportation dept. Bridget and Justin live in Panama City with their son, Beckett Dale. She attended Gulf Coast Coll. and has had a vinyl business but is currently a full-time homemaker. He is a cert. EMT and a fire fighter as well as helping in his family’s marina business.

The second daughter, Linda Thomasson, was born in Andalusia and attended Straughn School from which she was graduated. She was married to Samuel Farris Huggins, son of Sammy Dewitt Huggins and Martha Vera Garrett, who was born in 1944 in Andalusia. He attended and was graduated from Pleasant Home School and worked in communications. They resided in Pensacola, Fla., for a number of years before returning to Andalusia. They were faithful members of Cedar Grove Church of Christ where he served as a deacon and later, an elder. They were the parents of three children: Candace “Candy” Vanessa, b. 1965, m. 1996 Joseph Earl McClendon; Samuel “Sammy” Farris Jr., b. 1966, m. 1987 Elizabeth “Beth” Florence McKee, daughter of Colin Hale McKee and Ellen Ann Mitchell; and David Britton “Britt,” b. 1972, m. 1998 Shannon Leigh Catrett, daughter of Larry Wilson Catrett and Linda Sue Buckelew.

Candy and Joe McClendon reside in Montgomery where Joe owns and manages McClendon’s Service Center and Candy teaches English at Hooper Academy. Candy has a B.S. in English and History from Faulkner U. They have a daughter, Julia Catherine, b. 1998. Joe has a daughter, Catrina, b. 1980, m. Tom Willis, and they have two children, Logan and Christopher. Sammy Huggins has a B.A. in Bus. Mngt. from Faulkner U and works as operations supervisor for Steris Corp. He serves as an elder/shepherd for Prattville Church of Christ. Beth has national cert. in braille transcribing from National Library Ser. and works with the Autauga Co. Sch. Sys. They reside in Prattville and have three children: Pierce Brynan, b. 1988, m. Lauren Hayley Nichols; Ashton Breanna, b. 1991, m. Corey Reid Baker; and Elizabeth Ansley, b. 1996, m. Caleb Jackson Bearden. Pierce ad Lauren have two children: Webb Henry, and Hailey Grace (adopted). Ashton’s husband, Corey Baker, has three children: Casen Chadwick, Cooper Michael and Harten Rose. Britt and Shannon Huggins reside in Prattville and have two children: Elexis Blakely and Caden Reid. Britt earned a bachelor’s degree in computer info. Sys. from Faulkner U. and does computer work with CACI. Shannon earned a Ph. D in history from Aub. U. and is a hist. professor at Faulkner U.