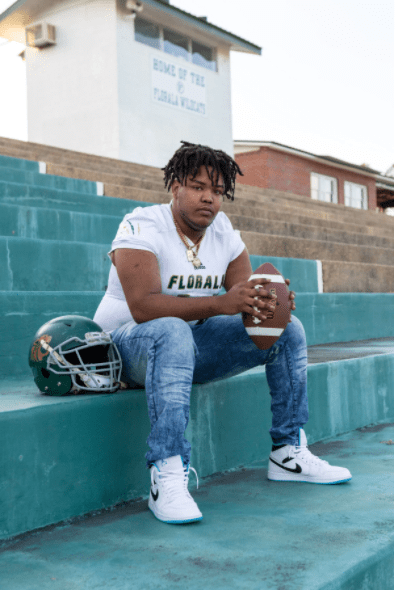 Cleve Gettis transferred to Florala High School and joined the football team before his sophomore year of high school. Six years before, he suffered an unspeakable tragedy that took his parents from him and his brother in an instant and left his life in shamble as a 10-year-old.

When he arrived in Florala, he had no idea how important his new teammates would become as his extended family and built-in support system.

He found out very quickly, however.

Cleve and his family visited a local lake to remember and honor his late mother on her birthday, July 6, with a balloon launch. What happened next was overwhelming, he said.

“I didn’t really invite them, but I told them where I’d be at,” Cleve said. “Next thing I know, the whole team came out.”

Actions speak louder than any words. “If that’s not an endorsement for high school athletics, I don’t know what is,” said Florala Principal Max Whittaker, a former football coach.

The unexpected show of solidarity and support made an immediate and powerful impression on Cleve? “I knew they cared,” he said. “I knew they had my back.”

Football quickly became Cleve’s sanctuary and helped him cope with the shocking trauma that forever altered his life several years earlier. His ability to overcome his personal tragedy put him on the road to becoming this year’s Bryant-Jordan Scholarship Program’s Class 1A, Region 1 recipient in the Student Achievement category.

A total of 104 seniors, 52 achievement and 52 scholar student-athlete recipients, will be honored at the 36th annual Bryant-Jordan Foundation Awards Banquet to be held at the Birmingham Sheraton Hotel ballroom tonight (April 12) beginning at 6 p.m. The achievement category recognizes  senior athletes who have overcome personal adversity to excel. All regional winners receive a $3,000 scholarship and could win more when statewide winners are announced at the statewide banquet tonight.

Former Hoover High School and University of Alabama standout Marlon Humphrey, now in the NFL as a cornerback for the Baltimore Ravens, will be the keynote speaker at this year’s banquet. No more tickets are available for this year’s event, but the event is being live-streamed by the Bryant-Jordan Foundation and can be accessed at the following link the night of the banquet.

Cleve Gettis’ road to the Bryant-Jordan recognition had a tragic beginning indeed. In May of 2012 in the north Florida town of Defuniak Springs, located just 25 miles south of Florala, Cleve’s father shot and killed Cleve’s mother when an argument escalated into unspeakable violence. His father, Cleveland Gettis Sr., then turned the gun on himself and committed by suicide.

The younger Gettis, just 10 at the time, and his brother witnessed the tragedy.

“We were all in the front yard when it happened,” Cleve said. “I cried all that day. I couldn’t sleep that night. It was bad. The next morning it felt like it didn’t happen. It felt like they were coming to get me. I felt like it was a dream.”

There was no escaping the grim reality. His parents were gone.

Years went by before Cleve’s life improved dramatically. The death of his parents caused major fault lines between the two sides of his family, so much so that he wasn’t afforded the opportunity to attend his mother’s funeral. He and his brother, who is only a year older, moved to Jacksonville, Florida, to live with grandparents.

Cleve explained he lived in a “dangerous neighborhood” in Jacksonville. He said his brother fell in with the wrong crowd and found trouble. Before Cleve’s sophomore year, he called Shirley Gettis – his father’s sister in Florala – and asked to live with her.

“I told him, ‘Come on, baby,” Shirley said. “I wanted him to finish school, graduate and have a good life.”

It wasn’t a seamless transition at Florala, a small school with less than 250 students in grades seven through 12 and sitting less than a mile from the Florida border. Shirley explained Cleve’s situation to Principal Max Whittaker, and Cleve joined a football program that included his three cousins. The school wrapped its arms around Cleve, especially the football team, and gave him a sense of belonging and purpose. “Football, now that’s his thing,” Shirley said.

“When he first came here, you could tell he had been through some trauma. That was pretty obvious,” Whittaker said. “He was emotional sometimes, as anybody would be who had been through what he’d been through. I’ve seen him grow and become a very determined young man to reach his goals. He’s respectful and appreciative for everything Florala High School has done for him. He has no behavior issues. He’s never had an office referral.

A two-sport standout who played football and basketball, Cleve stood out on the football field as a linebacker and defensive lineman. He helped the Wildcats earn three straight playoff berths and was named a team captain.

Off the field, Cleve has become a role model for younger players, despite a knee injury that robbed him of five games his senior season, and he works a part-time job at a local Dollar General. Cleve said the support of his family, cousins – whom he calls his brothers – and friends at Florala helped him cope and recover from his family tragedy.

“I have a positive outlook on everything,” Cleve said. “When I see something negative, I try to make something positive out of it. The school, they helped me get that mindset. Everything that I thought was a big deal or I thought I couldn’t do, they showed me I can ask for help. They showed me I wasn’t on my own and I have people around me who care for me and love me.”

Cleve hasn’t made a final college decision, although he’s considering Faulkner University in Montgomery and nearby Lurleen B. Wallace Community College. He plans to study business and perhaps channel his love of shoes – “I’m a huge sneakerhead,” he said – into a unique career path.

Whatever the future holds, those who know Cleve best see a bright future for him.

“He’s been through so much, and I don’t know I could have handled it the way he has,” Whittaker said. “We love him, and we’re proud of him. I feel like Cleveland is going to be successful because he’s got the determination, he’s got the grit. He’s a tough kid, both physically and mentally. He’s got all the tools to be successful.”