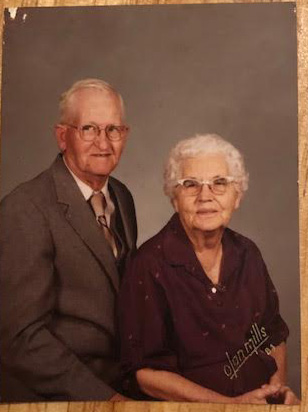 Charles Esker “Charlie” Thomasson was the fourth son born to Frank and Beulah (Sasser) Thomasson. He was born in Covington County and grew up on his father’s farm in the Cedar Grove community. He attended Adellum School and Cedar Grove CofC along with his siblings. In 1928, he married Runie Hare, d/o George Evans Hare & Betty McAllister Jay, and they made their home in the same community.

After a few years of farming, he worked for the O.H. Turner Dairy located on So. 3-Notch St. during the 1930s.  He delivered milk throughout the community on a panel truck. This led to him later establishing his own dairy on Brooklyn Rd., which he operated for about five years during the 1950s. But before that, during the 1940s, he went with brother, Otis, and brother-in-law, Almer Hare, to Niagara Falls, N.Y., to work at Dupont during the war. They were there for about a year before returning home and resuming farming. Charlie always planted a large garden from which he shared vegetables with neighbors and friends.

Charlie enjoyed children, especially his own six grandchildren who called him “Papa” and lived right near him. He and Runie were the parents of 2 sons: Esker Elijah, b. 1930, d. 2017, m. Elizabeth Ann Stokes; and Charles Wood, b. 1932, d. 2014, m. Audie Mae Adams. All four attended and were graduated from Pleasant Home Sch., and both couples made Andalusia their final home.

Esker grew up on his dad’s farm and graduated from high sch. in 1948. Following a brief stint with SE Elect. Const., he began farming, which he did until he entered mil. service. He was married in 1950 in Andalusia to Elizabeth Ann Stokes, d/o James Austin Stokes & Cola Huggins, who grew up in the same community. In 1952, Esker was drafted into the US Army, and after basic he was sent to Germany as a mem. of Co. A, 110th Reg’t, 18th Div. He served there for 18 months, and his primary duty was to drive his cmdr.’s jeep. After being discharged in 1954, he returned home and resumed farming which he did for 3 years. He then worked as a postman with the postal service for 23 years before retiring in 1989.

Esker and Ann were active in the Cedar Grove CofC where Esker served as a song leader, Bible tchr., deacon and later an elder. He also looked after the building and the cemetery. He and Ann are the parents of 3 children: Kenneth Wayne, b.&d. 1951; Roderick “Roddy” Esker, b. 1955, m. Mary Delois Broom; and Kathy Ann, b. 1957, m. Billy Wayne Futrell.

Kathy Thomasson met Billy Futrell at LCU and married in 1978 in And., but made their home in Midland City, Tex. Kathy completed nurs. pro. at Midland C. and worked in critical care before becoming CYRN-BD in heart institute. Billy earned a B.S. in psy. from LCU and spent 32 years as prob. officer for Midland Co. They have 2 children: Kathryn Ashlee, b. 1981, m. Brandon Hill; and Kelly Austin, b. 1986, m. Lexie Dee Scarborough.

Ashlee married Brandon Hill, s/o Brad Kirby & Shellie Hill, and they live in Midland City. Ashlee earned B.S. in hum. dev. & fam. studies from ACU. She has been a preschool dir., tchr., and children’s min. coord. Brandon has some coll. and is assoc. engr. at EDG Resources. They have 2 children, Lillie Ann and Myles Kirby. Kelly Futrell married Lexie Dee Scarborough, d/o of Alex & Shellie Scarborough, and they live in Lubbock. Kelly has B.A. in youth and fam. ministry from LCU and is an arborist and crew leader for Tom’s Tree Place. Lexie has B.S. & M.S. in nurs. from LCU & Dr. of Nurs. Pract. & Anesthesia from TCU, & is R.N anesthetist. They have 3 children: Adleigh Elizabeth, Zephyr Austin, and Ramzie Alice.

Charles Thomasson was reared on his dad’s farm and graduated from Pleasant Home Sch. in 1952. That summer he married Audie Mae Adams, d/o Luie Clarence Adams & Arrie Bernice Bass. He was soon drafted to serve in US Army during Korean Conflict, and after basic he was shipped to Korea. He was with the Hdqtrs. Batt., 865th AAA (Anti-aircraft Artillery) Battalion. After 14 months he was discharged as a corporal in 1954. He resumed farming and then moved to Mobile to do civil ser. at Brookley A.F.B. After 8 years, he was sent to Warner Robbins, Ga., but the base soon closed. He returned home and worked with US Postal Ser. where he worked as a postal carrier until retiring in 1989. Audie worked for a number of years and retired from Regions Bank. They continued to live next to his parents’ place on Brooklyn Rd. and were active in Cedar Grove CofC where Charles served as a deacon and then elder.

Cynthia and James Harrison are the parents of 3 children: James Brett, m. Christie Michelle Wade; Charles Brian, single; and Brittney Lauren, m. Neal Andrew Russler. Cynthia earned a B.A. in bus. admin. from TSD and works as sr. acct. for Eye Ctr. So. in Dothan. Her son, Brett, met Christie in China while teaching Eng. He has B.A. in Bible &, M.A. in Bib. studies from Lipscomb U., pursuing M.S. in agron. & soils at AU. Christie has B.A. in Eng. & B.A. in missions from Harding U. and M.A. in TESOL from Lincoln C.U. They are missionaries in Tanzania and have 3 children: Baylor Adelaide, Harper Mae and Cohen Rhett.

Rocky and Kim Thomasson married in 1981 and live in Daingerfield, Tex. Both have B.A. degrees from ACU. He worked many years in real estate, served 30 years on Daingerfield Fire Dept., retired in 2021 as City Mngr. and served as a deacon at Daingerfield CofC. Kim is Tax Assessor for Morris Co. They are the parents of 2 children: Charles Michael, b. 1984, m. Brittany Nation; and Cassie, b. 1891, single. Michael has B.S. in kinesiology and M.A. in admin. from Sam H.U., is asst. prin. and test. coord. for Hughes Springs, ISD. Brittany has B.S. in math & M.Ed. in curr. & instr. from OCU, is an adv. math teacher. Cassie has a B.A. in com. sci. & disorders, M.Ed. in admin. & M.Ed. in Diagnostics, is diagnostician for Keller ISD.