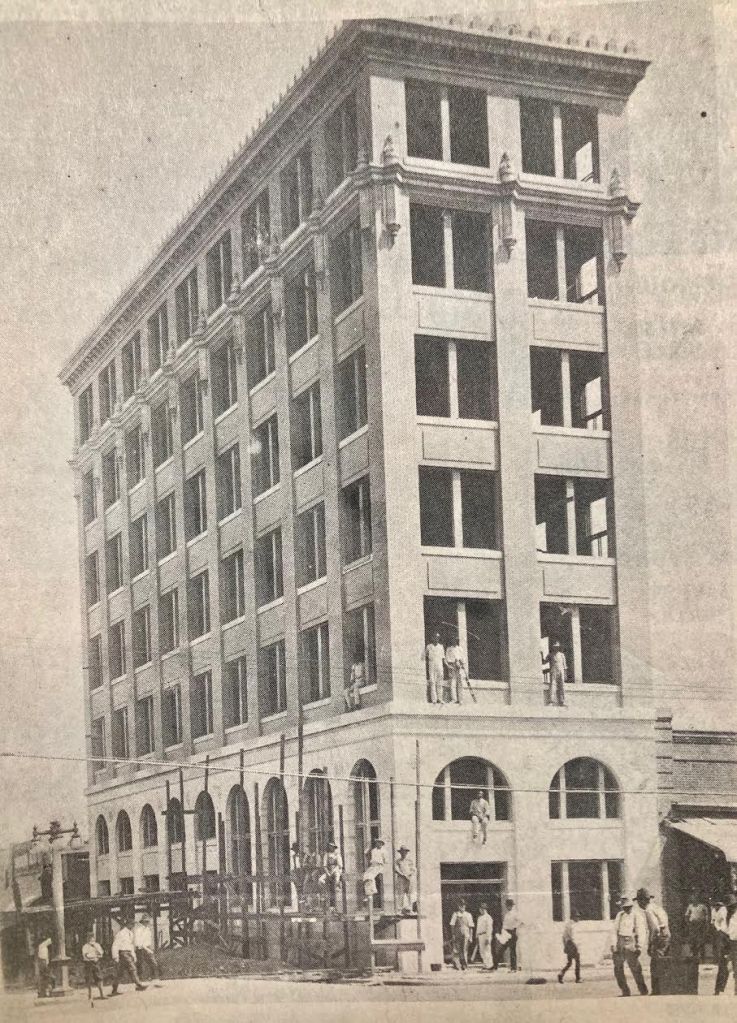 The advent of buildings that rose first six, then ten, and finally more than twenty stories was a technological achievement that commanded New York and Philadelphia skylines in the late 1800s. Then Chicago became the focus for skyscraper development. From there, the fascination for height in commercial style buildings began to spread nationwide.

Alabama began to see its first pair of skyscrapers in Birmingham and Montgomery in 1889. Alabamians viewed these six-story edifices as awesome. Not to be outdone, Mobile followed suit in 1907.

According to The University of Alabama Press’ “Historic American Buildings Survey, A Guide to the Early Architecture of the State,” it was reported that “The mystique of the skyscraper soaring above a town center became a prestigious format of the luxury city hotel or multi-storied office building.”

Times were good in Andalusia in the early 1920s. The little city was no longer a “cross-roads town.” There was industrial development, agricultural expansion, manufacturing growth throughout the county. Banks were playing an important role in the development of the community including the First National Bank organized in 1901. The bank was located on the Public Square where the Clark Theatre now stands. With capable leadership, the bank soon outgrew the facilities and a multi-story building on the “skyscraper” scale was constructed on the corner of South Cotton and Coffee Streets. The building was 100 feet deep and only 25 feet wide due to the owner of the adjoining parcel refusing to sell his property. The FNBB officers and directors chose to move forward with the project anyway.

It has not been recorded or remembered as to exactly whose vision and dream the building actually was, but bank officers were T. E. Henderson, president; W. F. Simmons, vice-president; Fox Henderson, vice-president; C. D. Boan, cashier; Dudley O’Neal, assistant cashier; and other directors included A. C. Darling and Frank K. Feagin.

Architect was Frank Lockwood of Montgomery. This design ended up being Lockwood’s first and only building on the “skyscraper” scale. Builder was Little, Clecker, and Company of Anniston. The six-story building known for its commanding appearance in downtown Andalusia was constructed for $115,000.

The Andalusia Star reported on September 10, 1920, “A wrecking crew is in the site for the new First National Bank building clearing the ground for the foundation for the seven-story structure (six floors with a basement).”

March 16, 1920 and November 30, 1920 – “Work on the First National Bank building is progressing nicely. The concrete work for the first story is almost done. We believe that the proposed FNBB will have every office rented before the building is completed.”

April 5, 1921 – “The finishing touches are being put on the steel and concrete framework for the new bank and office building for the First National Bank of this city.  Monday morning we saw a carpenter hanging over the eaves of the top story of this building nailing on a brace to support the terra cotta. We admired his nerve but – well, we just simply could not do it, that’s all.”

April 22, 1921 – “Fire Chief R. C. Brawner has raised the necessary funds to install an electric siren on top of the First National Bank building to be used as a fire alarm. This siren will be installed at a cost of $400. and will be electrically controlled. It can be heard to a distance of ten miles and will wake everyone in the city at any time of night – except the dead. It has a three horse power motor, and the motor is started by an electric button at the local telephone office. Chief Brawner is to be congratulated on this progressive move for a more efficient fire protection service.”

September 6, 1921 – “The exterior work on the new FNB building has been practically complete and the structure presents quite an attractive appearance. The decorative work is especially good, and there is nothing about the building that is not thoroughly modern in every respect. The framework (scaffolding) has been removed from the north side of the building, and the front side will soon be free of framework. Work is moving rapidly on the interior, and the elevator has been installed.”

January 6, 1922 – “The First National Bank’s new building will be ready for occupancy in the very near future. The floors above the first will be used for offices, the bank occupying the first. The latest equipment and furnishings are being used for the new home of the bank and many of the offices have already been engaged.”

In 1928, the First National Bank merged with the Andalusia National Bank. Unfortunately, the new bank was forced to close its doors following a run in October 1932 – a victim of the Great Depression. In 1937 The Commercial Bank founded in 1933 at another location purchased the FNB building and re-conditioned the first floor prior to moving in. Later that year, many of the upper floor offices and the large civic room on the sixth floor were re-modeled A second elevator was installed. The Commercial Bank also added on the northwest corner a beautiful clock with four faces and Westminster chimes.

By 1958, The Commercial Bank had grown and had built a larger modern new building on Church Street. Businessman  Frank Timmerman purchased the FNBB to house the Timmerman Insurance Agency which he operated until his death in 1969.

The building at that time still housed numerous attorneys, doctors, beauty shops, and business offices. Gradually, the tenants moved out until the building was completely abandoned by the end of 1972.

After serving the business and professional community for some fifty years, the building seemed doomed with most people thinking its usefulness was over, but a few visionaries could see a great future for it.

In 1981, the building then known as the Timmerman Building was purchased by William T. Kiepura, California investor, and S. Daniel Shehan, local businessman, at which time it was renamed First National Bank Building in keeping with the first ownership. In 1982, the building was listed on The National Register of Historic Places by the U. S. Department of the Interior. It was nominated as an historic landmark worthy of recognition and preservation as part of Andalusia and Covington County’s proud past.

Shehan, the local co-owner, converted the upper floors into apartment dwellings, First National Apartments, along with his primary residence. He first leased the ground floor to an old-fashioned sandwich shop, ice cream parlor, and soda fountain, Covington Square, and later to a jeweler, Cagle Jewelry & Goldsmithing.

In 2006 Shehan and Kiepura sold the landmark structure to  California partners, Jeff McClure and Tom Forbath. By 2017 the City of Andalusia under the Mayor Earl Johnson administration acquired the historic downtown building after abatement proceedings. This was made possible with the financial assistance of the Estep Foundation facilitated by Attorney Rick Clifton.

Old newspaper accounts state that the building was pretty much completed in the latter part of 1921. The bank and tenants began moving in early 1922. So 100 years later, we can still celebrate and commemorate this still structurally sound landmark. Plans are underway for future occupancies of the FNBB.

Let us not forget that a dream cherished by a number of Andalusia club women a century ago materialized – the beginnings of a room in the new skyscraper furnished by the management for the early public library, the Free Covington County Library.

More dreams are to follow, we are certain. New generations of visionaries with determination to restore and convert significant historic properties are on the scene in our midst. I Remember When the theme for the National Trust for Historic Preservation was “THIS PLACE MATTERS” …..and it truly does.

REMEMBER WHEN: 1946 Happenings in Andalusia