Marianne Merrill Moates Weber is a Southern writer, author, and playwright. Daughter of the late Walter Merrill and Mary Jim Hilson Merrill, she grew up in Andalusia and married an Andalusia boy Jim Moates. Our parents, the Basses and the Merrills, were great friends. Her dad played football in the Rose Bowl in the late 1930s with the University of Alabama. His picture hangs in the Three Notch Museum in the sports section. Young athletes always take note when they tour the facility.

Her younger brother Walter is my age. We were born about a month apart. I knew him as “Buddy” back then. I still have the wooden toy box his father built for me when I was a child. Walter is Dr. Walter Merrill now and is Chief of Staff at Vanderbilt University where he and his family live in Nashville. Walter was a member of the Class of 1970 at Sewanee, the University of the South. His specialty is pediatric cardiology.

Their late father helped to build the original St. Mary’s Episcopal Church in Andalusia on 2nd Avenue as his family was affiliated with the Andalusia Manufacturing Company. His craftsmanship and expertise as a young builder back in the day is still evident and would be considered vintage today some 70 years later.

Their Hilson grandfather moved his family to Andalusia in 1939 when he came from Montgomery to manage the Coca-Cola Bottling Company plant. That interesting building on the corner of Church Street and Baisden Street built in 1950 is being revitalized by the Baumgartners and will open as “The B” (pub) later this year (2021). It was always fun to ride by and look in the windows at the green glass Coke bottles going through the machine being filled up and bottled.

The Merrill brother and sister recently contacted the Three Notch Museum with the desire to donate the antique cabinet that has been in their family for many years. I have asked them to tell the story of the “Traveling Gold Cabinet” in their own words. I believe that the readers of Remember When will enjoy this story.

Many times I have looked at a piece of antique furniture and thought: “Oh, if you could talk! The stories you could tell!”   Our family has an antique gold cabinet with beveled mirrors that has been handed down for at least six generations.  I have often wondered how many people looked at themselves in those same mirrors.  How many conversations were absorbed into those shelves?  Oh, if they could talk! 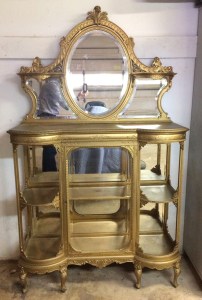 The first that was known of the cabinet, once said to be a copy of a cabinet like Marie-Antoinette would have enjoyed in her boudoir, was part of a set purchased by Irving Benjamin (I.B.) Hilson in the early 1900s for his home in Arcadia, Florida, near Milton, Florida.  Hilson and his wife, Adeline, built a large home for their seven children in that once thriving community.  Hilson was editor and publisher of The Milton Journal, a fitting career for a recorder of stories. His favorite story was his own:  he claimed to have been a stowaway on a ship to this country in the late 1800s.  Family researchers found him in an 1880 census in Alex City, Alabama where there was a large textile mill. His actual origins we cannot document.  What we do know is this man represents many of our ancestors who boarded ships and sailed to America for a new life.  We know about him after he arrived because he established a string of newspapers and enjoyed the finer things of life.

On June 26, 1908 a fire swept through his home in Arcadia and burned it to ashes.  The family barely escaped.  Hilson’s library of 2000 books was destroyed along with most of their belongings. Family and workers on the property saved what they could.  The gold cabinet was dragged down the front steps.  The Hilsons managed to rebuild, and for the next twenty years, they lived in the Pensacola and Milton areas and published newspapers.  Later in life he retired and moved to south Florida.

I. B. Hilson’s son, Joe Hilson, and his wife, Ada Ramsey Hilson, moved to Andalusia in 1939 when Joe became manager of the Coca Cola Bottling Company.  Joe inherited the gold cabinet when I. B. Hilson left the north Florida area. Joe brought the cabinet to Andalusia where it stood in his and Ada’s home on Third Avenue.  My brother, Walter, and I arranged figurines on its delicate shelves while listening to our grandmother play the piano.

Eventually the cabinet was handed down to Joe and Ada’s married daughter, Mary Jim Merrill, for her home on College Street in Andalusia.  The cabinet was there only a short time before Mary Jim moved to Pensacola into a home decorated with Danish Modern furniture–not a good match for the elegant gold cabinet. Mary Jim’s daughter, Marianne, married Jim Moates about this time, and Marianne took the cabinet to her home in Monroeville, Alabama.  When Marianne and her family moved to Birmingham, movers wrapped the cabinet in padded blankets and drove it up I-65.  There the cabinet found a home in the Moates’ dining room in a corner away from the hustle and tussle of four rambunctious children.

Marianne and Jim moved to Stone Mountain, GA in 1989, and the cabinet was wrapped once more as it rode across I-20 to its new home.  Several years later, Marianne and Jim moved to their lake cabin on Peckerwood Creek near Sylacauga, Alabama, and the gold cabinet needed a new home.  Old cast iron cook pots and deer heads hanging on the wall did not provide a proper backdrop for an antique gold cabinet.  Marianne’s son, Seth Moates, picked up the cabinet in his new red truck, wrapped it carefully in quilts, and drove it to Ft. Walton, Florida to his grandmother, Mary Jim’s, home on the bay.

The family enjoyed stories about the cabinet when they gathered around the dining room table with their parents, grandmother and step-granddad, Tom.  Through the years each of the eight grandchildren enjoyed rearranging the tiny china figurines displayed on the shelves. At Mary Jim’s passing, the cabinet was destined to find another home.  The grandchildren were polled: does anyone want or have room for a large, gold antique cabinet?  They had their homes and their decorations, and no one could take the cabinet.  It would go to safe keeping at Seth’s home in Millbrook, Alabama, until one of the great-grands was old enough to lay claim to it.  So, again swathed in quilts, the cabinet traveled north on I-65 where it had a place of honor in the entrance hall.

Another family move signaled that the cabinet would go elsewhere, so it made its way to Birmingham (once more) for safe keeping in hopes that one of the grands or great-grands could enjoy inheriting it.

But time and council by the elders (now in their 70s) have decided that enough is enough, and the cabinet needs a more permanent space.  Andalusia seems like the place it should be.  And it will make one more trip south on I-65.

Though not monetarily valuable, the cabinet’s true value is in the stories it holds and the family connections.  Like most of us who have pieces that have been kept through the generations, perhaps others will be inspired to share their stories and cherished family memories.