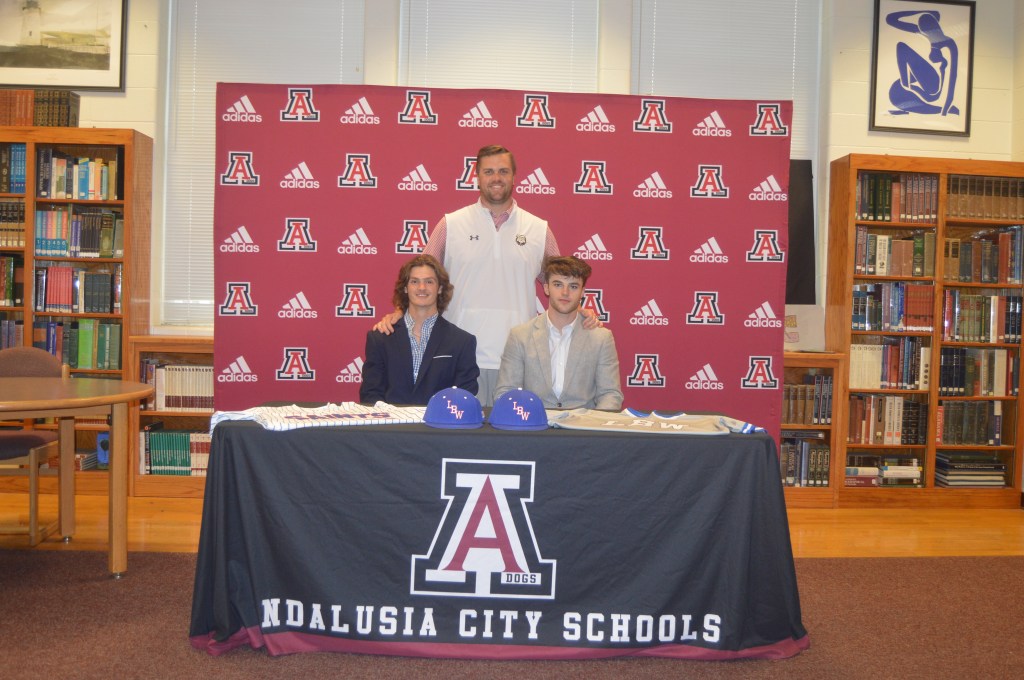 Andalusia High School seniors Jake Wilson and Caleb Blackston have signed to play baseball at the next level with LBW Community College.

Wilson has been playing baseball since he was five years old and decided on LBW because it was close to home.

“I knew that I wanted to continue playing baseball,” Wilson said. “With LBW being so close to home, I knew it would be a perfect fit.”

He plans on staying on the diamond to make sure he is ready for college baseball.

“I just need to keep hitting and staying in shape,” Wilson said.

In his final season of high school baseball, the Bulldogs went 20-7, losing to St. Paul Episcopal in the first round of the playoffs.

“I thought that we had a good year,” Wilson said. “The team was really close and I think that is what made us play so well together.”

Wilson plans to study either secondary education to become a coach or sports medicine in college.

He is the son of Ray and Melodie Wilson.

Blackston decided on LBW because of the college’s known baseball reputation.

“I heard at LBW they are very successful with Coach Helms,” Blackston said. “I also saw it as an opportunity for me to grow as an athlete. Coach Helms is a really great coach and easy to work with. He was very nice to me when I went and hit with them.”

The senior has played baseball since he could remember and couldn’t think of not playing the sport, which is why he decided to play at the next level.

“I am ready to stay prepared going into college,” Blackston said. “I’m ready to grow as an athlete.”

Wilson and Blackston were both part of the 2018 State Championship baseball team.

“I loved every minute of my senior season,” Blackston said. “I didn’t take anything for granted this season. I grew a lot as a player and I learned a lot especially from Coach Dent.”

He is the son of Stephanie and Kenny Blackston.

“Jake was a three-sport athlete and Caleb was a two-sport athlete for us and ran track in eighth grade,” Dent said. “As good as athletes they are, they are even better students and people. Being able to coach these guys for the past four years has been an honor and a pleasure. You know what those two guys are going to bring to the program and the school on a daily basis. They are so consistent and I have been blessed to coach them.”