REMEMBER WHEN: AHS Band Trip to Chicago in 1953 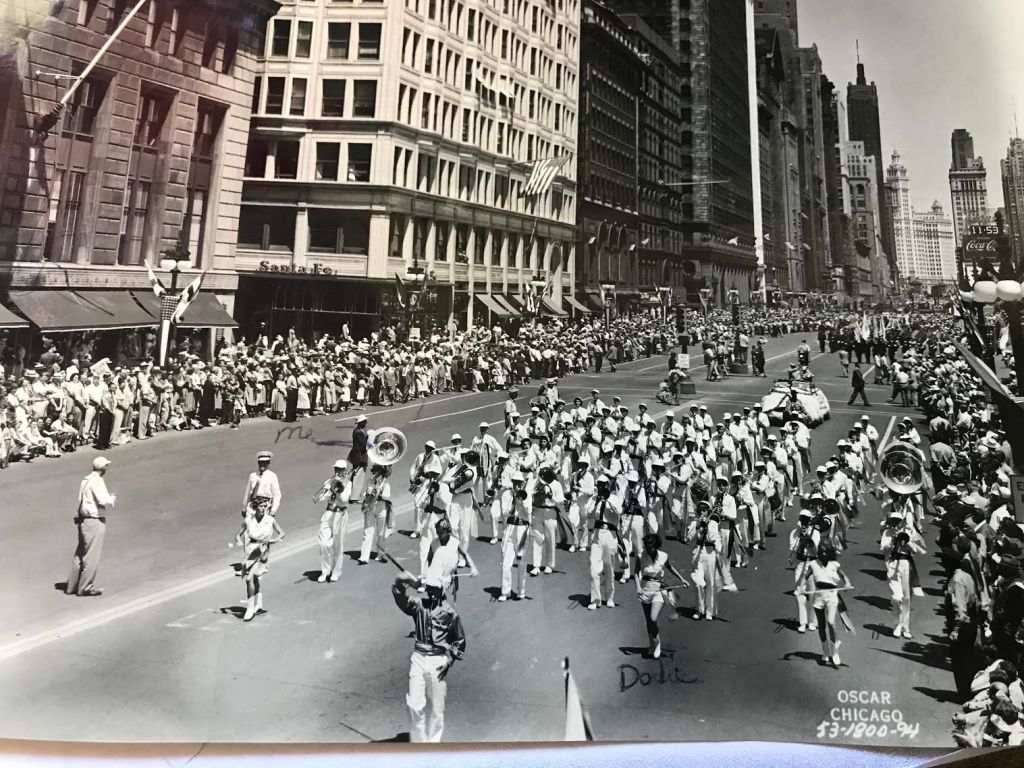 A memorable Broadway musical production in 1957 was “The Music Man,” book, music, and lyrics by Meredith Willson and Franklin Lacey. It was awarded the first Grammy award for Best Musical Theater Album as well as five Tony Awards. The musical was followed a few years later by the film adaptation in 1962. Who can forget the con man salesman Harold Hill who went to a small town in Iowa selling band instruments and uniforms? The final act of the play and film included “the marching band” wearing their new uniforms with the band playing “Seventy-six Trombones.” This musical was presented by chorus students at AHS in 2015.

Last week, the Andalusia High School band traveled to Disney World for a week. That reminded me of hearing about the trip the AHS Bulldog Band made in 1953 to Chicago. I read about it in The Andalusia Star News July 1953 editions after which time I decided to interview some of the still living bandsmen of that time.

“OFF TO CHICAGO – The Andy Hi Bulldog Band, some 82 strong, are departing on Sunday for Chicago and the Lions Club International Convention. To America’s second largest metropolis, Andalusia is sending her diplomats of music to carry high the banner of Covington County’s capitol city.”

“A party of nearly 100 persons will be aboard the Central of Georgia chair cars that will depart Andalusia on Sunday morning, July 5, at 9:30 a.m. Every precaution is being taken to assure the high school group a safe and pleasant journey of one week’s duration. Two registered nurses will be along to ascertain that neither sickness nor exhaustion dim this excursion. Four couples are serving as official chaperones to keep everything going smoothly.”

“Andalusia is so proud of her high school band. All of the city joins in sharing the glory that stems from this long-awaited march down Chicago’s Michigan Avenue in the Lions International Parade.”

“The bandsmen will leave from the railroad station, Fred Stickney, Lions president announced. The chair cars will move to Columbus, Georgia where the Andalusia Special will become a part of the “Seminole” train from Florida to Chicago.”

“It was the biggest gathering at Andalusia’s Central of Georgia station since the National Guard departed for Fort Jackson, S. C. Parents, brothers, sisters, aunt, and uncles of the band members plus a goodly number of well-wishers were on hand for the big send-off.”

Of the 82 band members, there were 35 girls and 47 boys. Bandmaster was Marvin Miller who also served as pastor of the West End Methodist Church. Miller and his wife headed up the list of chaperones. These included Lions Club members Mr. and Mrs. Bernard Simmons, Mr. and Mrs. Henry Lee Mullins, Mr. and Mrs. Jack McGowin, and Mr. and Mrs. Raymond Shreve, past Lions Club president. Nurses who accompanied the group were Mrs. Joe Rose and Mrs. Grace Hansford. President Stickney was not able to make the trip because of a recent addition to his family, but he was responsible for making all of the scheduling arrangements including lodging, food, and all activities.

Prior to departing Andalusia, a short prayer service was conducted by Rev. Powers McLeod, pastor of First Methodist Church. “A letter had been sent to all the parents detailing the schedule for the trip,” according to Sharon Jernigan Parham who brought her scrapbook of the occasion to this writer. “We were so excited to be a part of it. There were 7th through 12th graders in the band at that time. I was an upcoming 10th grader in the Class of 1956 and played the clarinet.”

Jo Ann Brannon Foshee (clarinet), a member of the Class of 1958, remembered the band playing “Dixie” over and over from one end of the parade to the other. Eating fresh cherries from a fruit stand on the sidewalk outside the hotel was another vivid memory of hers.

“That long train ride of 24 hours from Andalusia to Chicago failed to dampen the pep and enthusiasm of the band. The youngsters milled up and down the aisles of the three-car special constantly, fought it out with water pistols, swung from the luggage racks, wrestled, yelled, danced, and sang. There was one brief minute which approximated silence when they sat down and tore into individual boxes containing a fried chicken lunch!”

One of the bandsmen said, “It was bedlum!”

“But for all the noise and constant movement, those Andalusia kids are finest youngsters you’ve ever seen,” declared the chaperones, “but believe me, it will be relief to get them back to their parents.”

On Monday afternoon upon arrival and check-in at the Belair Hotel, the students later attended a local television show, “Welcome Travelers,” staged especially for out-of-town groups attending the convention in the Windy City.

On Tuesday, the sightseeing began with a trip to the Stockyards, Washington Park, the University of Chicago, Jackson Park, and the Museum of Science and Industry lunching in the cafeteria there. This was followed by a tour of Lakeshore Drive, Hyde Park, and the Shedd Acquarium with dinner at DeLazon’s Restaurant before attending a White Sox baseball game at Comiskey Park.

Wednesday was Parade Day where bandsmen Mark McElreath (cornet) remembered the students wearing white shirts, trousers, shoes, and caps with purple and gold sashes and neckties in the Lions Club colors. Twirlers (Dodie Scherf, Vassie Jo Moates, Charlotte Pritchett, Ann Wishum) and the Drum Major (Bill Hitt) wore their uniforms. A photograph of the band marching down Michigan Avenue taken from a third or fourth story building appeared in the local newspaper. This once in-a-lifetime march down the boulevard with skyscrapers all around was an unforgettable scene etched in the minds of all of the former bandsmen interviewed. The picture, thanks to Amy Scherf Gregory, will be added to the Three Notch Museum and the AHS Heritage Room.

After the parade, the band was treated to a dinner party as guests of Sears, Roebuck & Co. at the Congress Hotel. A panoramic photo was taken of that occasion. A Sears official talked by long distance telephone with an Alatex executive and commented that “Andalusia youngsters had been perfect ladies and gentlemen at the party.”

Visits were made on Friday to the Board of Trade, the Lake Michigan Observatory, Adler’s Planetarium, and Marshall Field’s Department Store for shopping with departure for home which was set for 5:10 p.m.

Friday night and Saturday was spent on the train trip home with arrival on Saturday night around 5:45 p.m. on July 11.

The manager at the hotel in Chicago sent word home with strong applause that “Your state is safe in the hands of your young citizens.” Band parents who had raised all the funds for the trip were happy over the safe return of their offspring who represented the city in a “fashion that brings nothing but good will which capped the band’s big jaunt in fine fashion that was the excellent mark given the group for their deportment while being several hundred miles away from home for almost a full week.”

Even though I was almost six years old at the time, I Remember When that day I accompanied my daddy, Charlie Bass, a young city councilman at the time, who filmed from his car with his new moving picture camera the train steaming up Highway 29 North and crossing the trestle over the river at Gantt. He was a good friend of Raymond Shreve, father of William Shreve, one of the bandsmen and other parents, too. We showed that film in our living room many times.

Thanks to Jo Anne Brannon Foshee, Sharon Jernigan Parham, Mark McElreath, Susan Rawls (Mrs. Dan Studstill) Studstill, and Amy Scherf Gregory whom I spoke with about their memories. I understand they reminisced with Bob Meredith, Zack Studstill, and Andrea Johnson who appreciated the educational opportunity for that “stupendous week in Chicago.” They all stated that they bet the AHS Band didn’t have as much fun in Disney World in 2021 as they did in Chicago in 1953! How about it Bulldog Band?

Looking over the list of names of those band students of the 1950s in the old newspaper, they are AHS graduates who went on in their adult lives to having raised fine families and experiencing admirable careers and great successes in many walks of life.