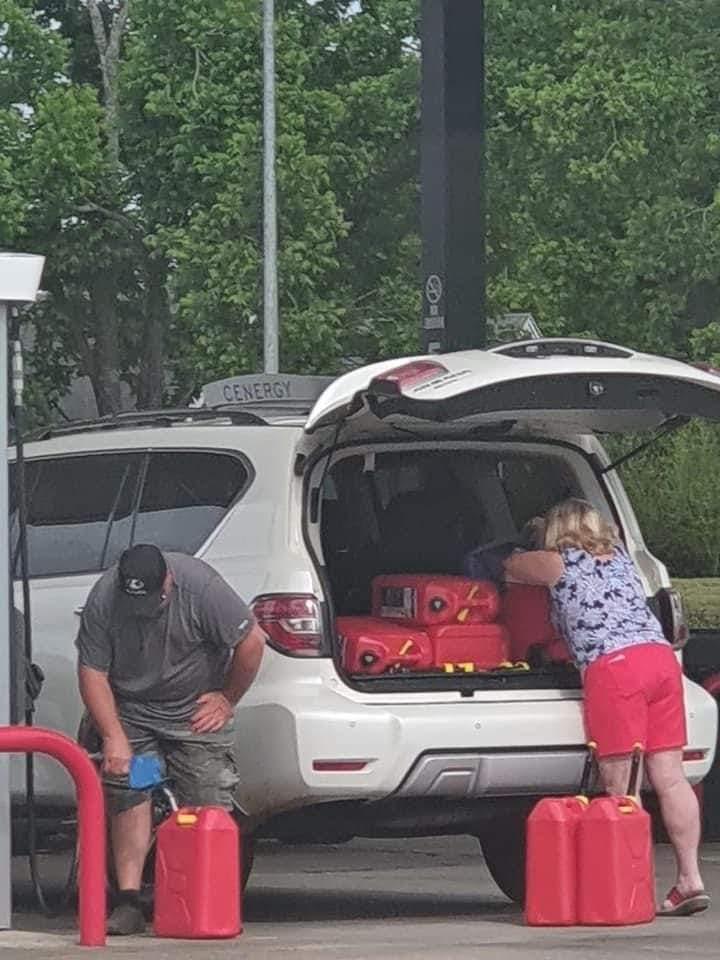 A couple stops at Fletcher's in Florala to fill up several gas tanks. Photo by: Mike McLeod

After a cyber-attack on the Colonial Pipeline happened on Monday, several people have started panic-buying gasoline to make sure they were stocked up in case of a shortage.

The FBI has said that an online gang known as DarkSide struck the Colonial Pipeline system with a ransomware attack, which takes computerized systems hostage until a payment is made.

The Colonial Pipeline system delivers about 45 percent of the fuel for the East Coast, including gasoline and jet fuel. It runs more than 5,500 miles from Texas to New Jersey.

States like Georgia, South Carolina, North Carolina, Florida and Virginia may be especially vulnerable because they have limited options in terms of fuel transportation alternatives. Gulf Coast states can rely more easily on shipments from tankers.

As seen in the picture, some citizens are panic buying gasoline, including this couple filling up tanks at Fletcher’s in Florala.

“I just see a lot of panic buying,” Fletcher’s owner Anthony King said. “There was one picture that was shared 496 times of an older couple with several gas tanks stacked up in an SUV on their sides.”

King said last night his stores ran out of gas because of the panic buying.

“Florala ran out of gas yesterday afternoon,” King said. “Stores around us are running out of gas and that puts more pressure on us. It’s a domino effect. If one or more stores run out around us, that puts more pressure on the stores that are left with product in them. There were a lot of fuel trucks running into Covington County and most everybody’s stores are full again.”

This massive influx of gas buying came as a surprise to King, who said they usually are prepared.

“It is just panic mind and it really came out of nowhere,” King said. “Usually if there is a hurricane coming up in the Gulf, you anticipate panic buying and you have two or three days to pick volumes up to accommodate that.”

King said those that went to the Florala Fletcher’s were from across state lines in the panhandle of Florida.

“Those people don’t even know where their gas comes from,” King said. “They are not even dependent on the Colonial Pipeline. The entire panhandle of Florida is filled with barge-fed terminals.”

“The truth of the matter is we have supply interruptions three or four times a year and people don’t even know about it,” King said. “The reverberations in supply are taken out by fuel on hand at the terminal in their tanks or local marketers. Most of the time, people wouldn’t even know that we had a supply interruption. How this blew up, I really don’t know. About two years ago, we had two explosions on the pipeline there outside of Birmingham about two weeks apart. It was a huge supply interruption, but nobody ever knew about it. They never panic bought and everybody had plenty of fuel.”

Now, where does Covington County get its gas from? King said the vast majority of Covington County’s gas does not come from the Colonial Pipeline, but the Plantation Pipeline.

“Most of our fuel comes from Montgomery, Alabama,” King said. “The different marketers here pull out of Montgomery and most of that supply comes off of the Plantation. The problem starts when people start panic buying and if the Colonial stays down long term, then the people that are dependent on that pipeline will start sending trucks to pull off of the Plantation. That’s when you get a system that is strained.”

Once the fear of a gas shortage dies down, King said everyone’s tanks will be full again.

“Fuel is traded like a commodity every day of the week, so I don’t think this alone will cause the price of gas to go up,” King said. “I don’t think the panic buying will last. I give it a couple of days and everyone’s tanks are full.”

“We are encouraged by the news this morning that Colonial Pipeline is bringing its pipeline back online in stages and hopes to restore full service by the end of the week,” Johnson said. “While we understand people are anxious at the thought of a fuel shortage and want to fill their tanks, we encourage those who have enough fuel to last until Colonial comes fully back online to wait. Your buying could prevent someone from being able to get to work or to a doctor’s appointment this week.”

Ivey announces end of participation in all Federal Pandemic…