From uncertainty to the sky: Brock lands first flight job 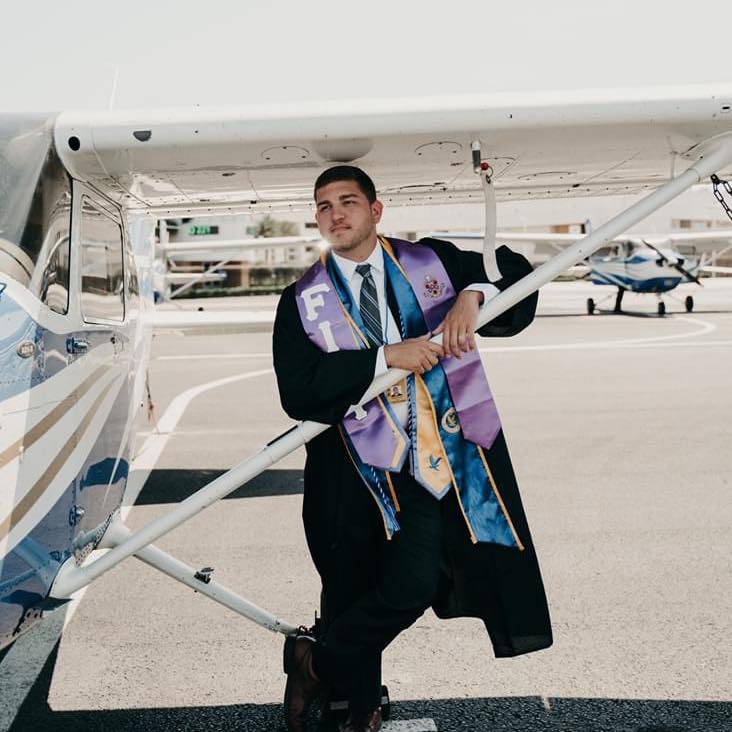 When COVID-19 hit the United States, Andalusia High School alumnus Charlie Brock found his world turned upside down, working in the restaurant business with a bachelor’s degree in flying planes.

“The pandemic definitely threw my life around,” Brock said. “Basically, we got home from Spring Break 2020 and I was hanging out with my girlfriend. Within an hour, we both got a phone call saying that our futures were going to be turned completely upside down. We had no idea where we were going to go next. She was supposed to be interning with South West Airlines and I was supposed to move to Phoenix, Arizona, to be part of their New Pilot Pathway Program and due to COVID, it was all messed.”

Brock had to move back home to Alabama and got a job as an assistant manager at a restaurant in Evergreen.

“We had to take a step back and figure out what we were going to do,” Brock said. “That was when I decided I was going to move back home Alabama. I worked at the restaurant in Evergreen just to get my feet under me. It was pretty humbling for me, going back home after you graduate college, not knowing what you’re going to do. Just being an assistant manager at a restaurant when you have a bachelor’s degree to fly airplanes, it was not a match.”

After that summer, Brock decided to move to Phoenix, Arizona, to get his flight instructor ratings.

“I could have stayed at the restaurant for as long as I wanted to, but I would have gone crazy,” Brock said. “I knew if I got my flight instructor ratings, something might come about, but I knew that it wasn’t a job guarantee. I did a little flight instructing on the side while I was waiting for the company to hire me.”

Brock soon found out that due to COVID-19, that company was not doing a lot of hiring externally.

“If I would have been in the program from day one, as in a cadet, then I would have been ok because they have an agreement with them,” Brock said. “But since I was apart of the ‘pipeline’ they couldn’t give me a job.”

Still fighting for a place in the sky, Brock took on another part-time job, but this time fate met him at the door.

“I got a job at a Fixed Base Operator, which is basically where private airplanes come in and out of,” Brock said. “I worked as a customer service representative for a while. I worked for about three months. While I was there, I met a guy that worked at Sierra West Airlines. I noticed that he was young and he was already flying a Learjet. I told him that it was awesome that he was already flying a Learjet and asked if they were hiring. I told him to sign me up, gave him my resume and cover letter. A month later I got a phone call that I was hired.”

Brock will be flying a metroliner plane, carrying cargo.

“What you would see, for example, at the Andalusia airport would be general aviation, which falls under Part 91,” Brock said. “What you see at a regional airport, which is called airline operations, would fall under Part 121. What I’m doing is under Part 135, so basically it is under an operational certificate with the FAA. You could do this in all different ways, but this is a cargo company. So, they own metroliners, a Falcon and two Learjets. The Learjets do charter operations for passengers and then the Falcon and metroliner do cargo. We work on an on-call basis, so basically, I am on call every day and wait for a call to come through. It is a lot of fun.”

While in flight school in Daytona Beach at Embry-Riddle Aeronautical University, Brock said he never thought he would work doing cargo, but now is beyond grateful for being given the chance.

“I was never looking for a Part 135 gig,” Brock said. “When I was in college, I was determined to be a flight instructor. With COVID, everything got all jumbled up. So, to find myself here is quite a blessing.”

MOORE ROAD CLOSED BETWEEN 8 AM AND 2 PM…