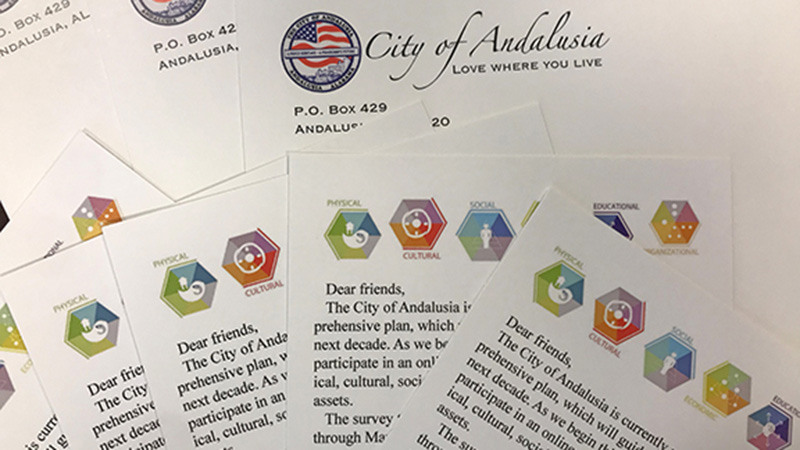 The City of Andalusia has begun the process of updating its Comprehensive Master Plan and is inviting residents to provide input through a Virtual Community Survey.

The planning process will build on and surpass expectations set in 2003 with the explicit goal of developing a forward-thinking plan that embodies the vision and goals of Andalusia.

Director of Development Andy Wiggins is leading the effort for the city, and the City of Andalusia Planning Commission will play a major role in the development. The City has contracted with Concordia, a New Orleans architectural and community planning firm, for the project.

“We would like for as many people as possible to complete the survey and give us their thoughts about the things they love in Andalusia, and what they would like to see added to the community,” Wiggins said.

Residents may access the survey from the city’s website, or social media pages. Those who are registered voters will begin receiving postcards this week that include a QR code to take one directly to the survey. Those who do not have access to the Internet may participate in the survey in the Andalusia Public Library’s computer lab.

In addition to the survey results, the team members plan to seek additional input through community meetings this summer.

Mayor Earl Johnson said the plan developed in 2003 has been instrumental in the city’s development, and he believes the updated plan also will be helpful.

“A sound Comprehensive Plan helps ensure that the City of Andalusia remains a highly-desirable community in which to live, work, and visit,” Mayor Johnson said. “This can be accomplished by preserving and enhancing the qualities of the city that are considered important. The plan helps residents, business owners and developers invest in the community with a reasonable expectation of what will happen in the future.”