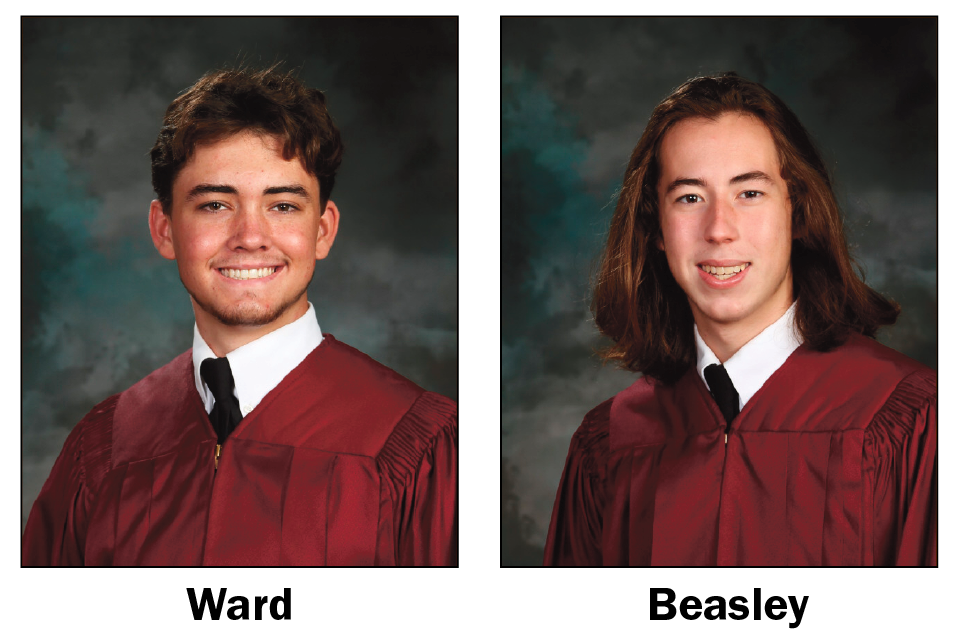 AHS valedictorian Collin Ward said he has always tried to compete to the best of his ability.

“Whether it be sports or academics, I have given it my all,” Ward said. “I have been first in our class since freshman year. I did not give much thought to rank. I worked hard in all my classes and did what I believed to be my best. The result happened to be valedictorian.”

AHS salutatorian Matthew Beasley has been ranked right behind Ward since his freshman year.

“My goal was to make sure I didn’t drop and hopefully take the first spot,” Beasley said.

While in his last semester of high school, Ward said he piled on the classes to make sure he would stay at number one, but started to worry when Beasley was doing better than him in Calculus.

“My schedule consisted of Physics, college Calculus, and Spanish 2,” Ward said. “It was by far the hardest semester of my high school career. I struggled in calculus at first. My last math had been pre-cal a year prior and during the COVID-19 Pandemic. On top of that, Matthew, the salutatorian, was in my calculus class and had just taken pre-cal. It drove me crazy to see him score higher on every math test for the first nine weeks. It seemed that no matter how hard I worked, I didn’t see results. I was spread thin with all my classwork and began to fall into a depression. I couldn’t sleep, hardly ate, and spent my free time trying to nap and study. It was my desire to be number one that pulled me through that depression and kept me competitive. After the 1st nine weeks, I finally began to see results. I was scoring almost as high as Matthew. On our last test, I finally scored one point higher. On the final exam, I tied Matthew. While all of the classes weighed the same on my GPA, I saw calculus as the only class that mattered. Mathew definitely ended with a higher grade than I did, but I feel that in the end, I did better than I ever believed possible and gave it my all.”

Beasley said his only concern was passing Ward in the ranks.

“Collin and I have had the highest grades by far throughout all of high school so my only concern was passing him in the ranks,” Beasley said. “I made sure I made as high as possible on all assignments and did any extra credit I could for this reason.”

The two are heavily involved in extra-curricular activities at AHS with Ward participating in the Peer Helper program and Andalusia Ambassadors and Beasley participating in band, tennis, Student Government Association, Usher Club and being Class Vice President.

Outside of the classroom, Ward spends his free time in the gym working on his physique and reading. Beasley spends his time hanging out with friends, playing tennis and spending time at the lake.

Ward said it is hard for him to think of a role model, but has met a lot of people with traits he tries to replicate.

“I find it hard to name any one role model,” Ward said. “If I was pressed to name one, it would be my mother. My mom has always supported me and taught me more lessons than anyone else. Her passion for driving change and helping others is an inspiration to all of those whose lives she’s touched. I have her to thank for my success.”

After graduation, both Ward and Beasley plan to attend Auburn University.

“I plan to pursue a degree in aerospace engineering,” Beasley said. “Math has always been a strong subject for me and I believe that I would enjoy engineering aircrafts/spacecrafts.”

Ward plans to major in political science at Auburn.

He is the son of Allen and Kimberly Ward and the grandson of Dr. William Thomas and Hilda Thomas of Troy and Mr. Roy Ward of Enterprise and the late Mrs. Mary Carol Allen of Brewton.

Beasley is the son of Layton and Mindy Beasley and the grandson of J.T. and Frances Cauley and Wilmer and Audrey Beasley.