REMEMBER WHEN: The Clock, The Chimes on Court Square 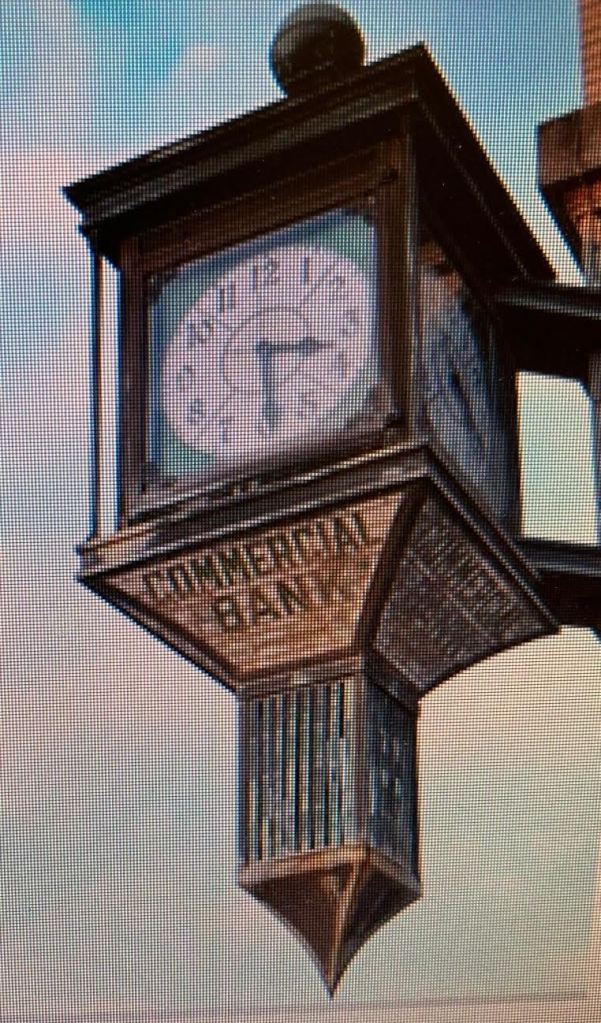 “CHIMES TO STRIKE THE PASSING HOURS – The Commercial Bank To Put Illuminated Clock On Its Building; Equipped With Chimes” was the headline in The Andalusia Star on February 9, 1939.

“The new clock that Andalusia has been looking forward to will arrive this week, according to W. H. Beall, president of The Commercial Bank, purchaser of the clock which will be installed at an early date.”

“The magnificent electric illuminated clock will be erected on the corner of the building. The most distinctive feature of the clock other than its unusual artistic appearance and the perfection of its construction and mechanism is the complete set of Westminster chimes with which it is equipped. These ring every quarter hour and may be heard practically as far as the clock may be seen.”

“The clock will be 12 feet in height by four feet square, of bronze, copper, and brass statuary bronze finish. All faces of the clock are alike, and under the dials will be the words ‘Commercial Bank’ in large illuminated letters beautifully made up in art glass work. The dials of the clock are 30 inches in diameter, on white glass, with crystal glass on the outside.”

“President Beall states, “As a home institution serving the people of this locality, we have in the past endeavored to show our appreciation by presenting our patrons with calendars and novelties and otherwise recognizing your cooperation in making this a serviceable and successful banking house.”

“Years of prosperous banking have been made possible only by your support. We wanted to show our appreciation in a substantial way and have therefore purchased from the manufacturers, the O. B. McClintock Company of Minneapolis, Minnesota, a large and handsome clock combined with a set of the softest and most beautiful chimes ever heard in any city of the old or new world.”

“Everyone who has lived within the sound of the bells of Westminster (in London) is familiar with the verse. ‘Lord, through this house, Be Thou our guide. So, by Thy power, No foot shall slide.’”

“The origin of the carillon has never been positively been established. Some writers credit it to a Mr. Crouch who was a pupil of Dr. Randall, Regius Professor of Music. This, however, is disputed by other writers who accredit it to the opening bar of Handel’s ‘I Know That My Redeemer Liveth.’”

“The chimes were first fitted to the clock of the University church, St. Mary’s the Great in Cambridge, but were not copied until they were reproduced in a very large scale in the Victoria clock tower of the houses of Parliament.”

“May we hope that the chimes will mean something to all of our people – that they will have a message for the youngster on his way to school; a thought for the businessman who hustles through the day; a solace for the old; an inspiration for all.”

“Every day of the week, the chimes will be sounding their message – the note of warning spoken in time; the chime of rejoicing; the lament in time of sorrow. This chime will be all things to all men for it is going to belong not to us alone, but to men and women and children of our community.”

The Commercial Bank had moved into The First National Bank Building by this time frame. It is not clear as to whose idea the installation of the clock was – a bank board member or officer, a traveling salesman who was selling his ware, or possibly a depositor who had seen a similar clock in his travels. Whoever it was, it was surely a true romantic at heart.

For over eighty years, this iconic clock has been a part of our beautiful downtown.  For a number of years, it was in disrepair. When the building was purchased by Dan Shehan and his business partner in 1981, the clock experienced restoration under his leadership as did the landmark building.

In 2017 when the City of Andalusia purchased the building, Mayor Earl Johnson researched the McClintock clock and finally was able to identify the workers to restore the clock in order to have it tell time and chime once again on the quarter hour.

The clock shown from many angles has been a popular image to capture by many photographers. Its likeness has been used by the Andalusia Area Chamber of Commerce and the City of Andalusia for hometown publicity in brochures, flyers,websites, and letterheads. As citizens travel across America, one is likely to see similar clocks in main street settings. How many there are is just a guess, but one thing most visitors remember about Andalusia’s Court Square or the Public Square as it used to be called is “the clock.”  When returning back home from a vacation, one might ask a family member, “Remember When we drove through that little town in South Alabama. We drove around that square with the beautiful courthouse, the park in the middle, and we admired that skyscraper with ‘the clock.’”