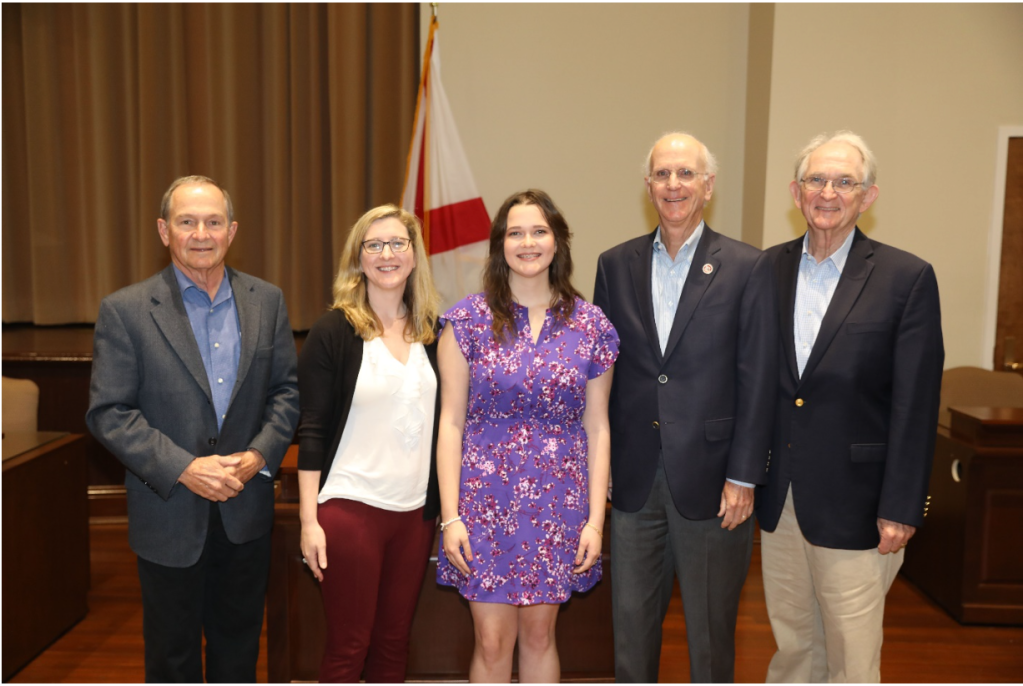 Chelsea Dawn Baldwin, the daughter of Charles and Andrea Baldwin, was recently selected as the 2021 scholarship recipient of the Andalusia High School Scholarship Foundation (AHSSF).  Chelsea was one of nine applications for the four-year renewable scholarship.  The award was presented Saturday, April 25th, at the culmination of the annual board meeting of the AHSSF.  Chelsea is also eligible for the AHSSF International Study Scholarship awarded annually to Andalusia High School graduates who are currently pursuing undergraduate college degrees and desire to participate in a university-based summer study abroad program.  Currently, the AHSSF awards three International Study Scholarships each year—the Findley Scholarship, the Godwin Scholarship, and the Class of 1948 Scholarship.  These scholarships provide tuition, travel, and living expenses for a four- to six-week program at historic institutions to include the University of Cambridge in England.

While attending Andalusia High School, Chelsea has been a peer helper for four years, played in the Jazz Band, played varsity tennis, and has been a Meredith’s Miracles volunteer for three years.  She already has obtained several certifications to include mental health, first aid, and ServSafe.

In the fall, Chelsea plans to attend Troy University and study Psychology with the intention to obtain a Master’s degree.  Chelsea chose Troy University to pursue her education because of the tremendous opportunity the university provides to interact with professional therapists and others through various internships.  While at Troy, Chelsea also plans to minor in music and continue her outstanding musical career with plans by participating in the Troy University Marching Band.  Her phenomenal skills and consistency while performing with the soprano clarinet has garnered Chelsea recognition as an Alabama All-State band member for five straight years as well as the distinction of being chosen Alabama District Eight Honor band for the same period.  She attended Troy University Honor Band for six consecutive years and sat first chair in the University of Mobile High School Honor Band.  She also has been Principal Clarinet for the Andalusia High School Symphonic Band for the past five years and attended Auburn University’s High School Symphonic Honor Band in 2020.

Chelsea has recognized the enormous growth in mass violence in recent years.  Part of that growth can be attributed to the increase in the number of people with mental illness and other mental health issues that go untreated treatment.  Chelsea aspires to help increase mental health awareness and help others recognize mental health issues in our youth which may cause lead to bouts of depression, bad behavior, and thoughts of suicide.  With only half of people who are diagnosed with a mental illness being treated, Chelsea intends to be available to provide proper guidance, support, and empathy for those who are suffering and have been suffering without proper care.