REMEMBER WHEN: The Story of the First Methodist Church Carillons 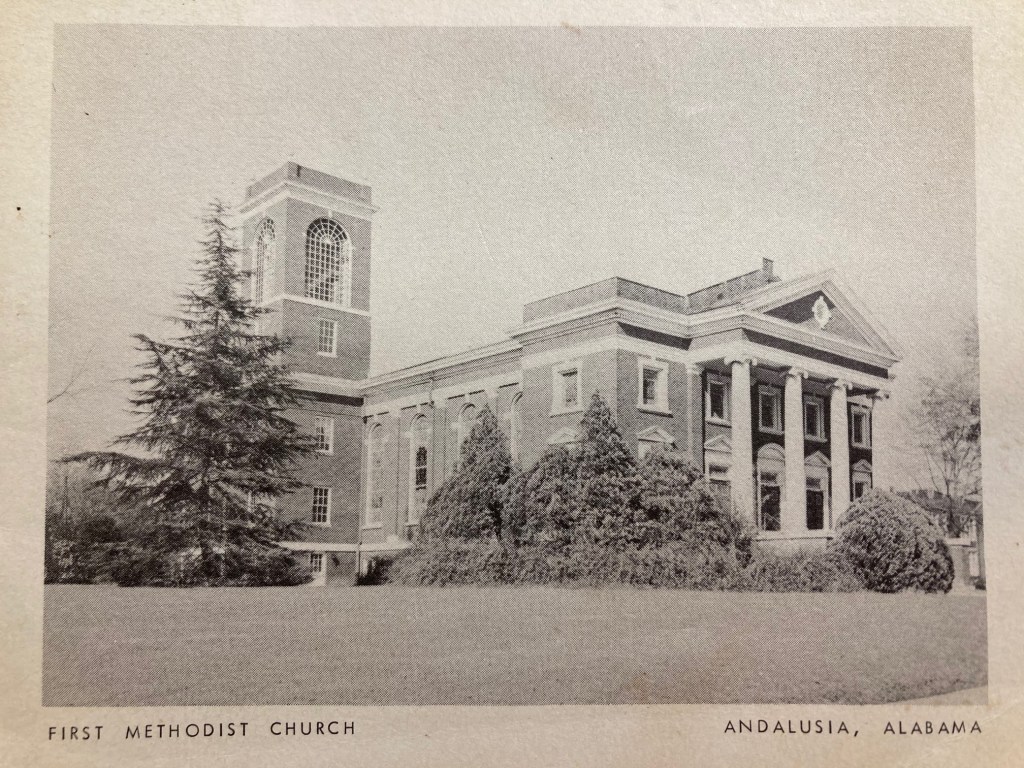 The young generations of Andalusians do not remember the carillon bells of the First Methodist Church on East Three Notch Street that chimed. The bell tower is still there. Some citizens may not even know that there is a bell tower on the west side of the main church building.

From the January 15, 1948 issue of The Andalusia Star News, this headline appeared – “METHODIST CHURCH CARILLON TO BE DEDICATED FEBRUARY 1ST – Is Gift of Mr. and Mrs. J. G. Scherf As Memorial To Their Parents – On February 1(1948), the Carillon of the Methodist Church will be dedicated in a special service. The gift of Mr. and Mrs. Scherf is being dedicated as a memorial to their parents, Paul H. and Aurelie Scherf and William Esther Gibson. Purchased more than two years ago, the installation of the carillon until a short time ago was postponed because restrictions and shortages of building material (during the war years) prevented the construction of the new tower which is to house it.”

In one of the earlier years of Dr. S. M. Baker’s ministry in Andalusia, the carillons were dedicated by Bishop Costen J. Harrell who came to Andalusia for the special dedicatory service. Miss June Albright, head of the music department of the J. C. Deagan Company of Chicago, played the bells during the service.

“A very important part of the Carillon’s operating equipment is the Westminster Chiming Device which sounds the hours and quarters on the bells during the daytime and early evening hours. Actual bells are installed in the belfry of the new tower. There are no synthetic devices or radio tubes to produce artificial bell tones through loud speakers.”

Elizabeth (“Twinkle”) and Ed Dannelly’s 1973 book “100 Years – Minus 4 of Methodism in Andalusia” states, ”The church members erected the carillon tower to house the thirty-two unbreakable tubular bells. The Chicago company which installed the carillons is the largest manufacturer of bells and chimes in the world. Mr. Scherf informally voiced the hope that the carillons would be played each morning and each evening at the approximate hour when employees of Alatex and Andala, the original  J. G. Scherf manufacturing enterprises, go to and depart from their daily labors. The gift of the carillons by the Scherfs is marked by a large copper and hardwood plaque near the entrance to the sanctuary.”

Gatha Reid Mallard, daughter of the late Attorney Ed and Gladys Reid and graduate of the AHS Class of 1953, who now lives in Decatur but grew up worshiping with her family in the Methodist Church remembers, “Our teenage girls’ Sunday School class met upstairs in the carillon room. When the bells would play on Sundays, our class would sing along to the old hymns like ‘He Lives’ and ‘Old Rugged Cross. I think we disturbed some of the other classes because we sang so loud!’”

She also recalled, “The Westminster bells would originally chime every 15 minutes all day until nearby residents complained. After that it was automatically set to chime on the hour.”

Joe Proctor stated that the door up the steps to the carillons was always locked.

Betty Brogden Baldwin, long-time Methodist, especially remembers the carols played by the carillons especially at Christmas time. “Once late one afternoon when I was coming out of the grocery store there adjacent to the church, I spotted an older couple standing on the corner. They were known for walking everywhere they went so I asked them – ‘Can I take you home? I am going that way (I really wasn’t!).’ They replied, ‘No but thank you. We are standing here enjoying the old hymns coming from the bell tower.’ I thought to myself that we often take things like that for granted, and we should really appreciate those bells that we are fortunate to have here in Andalusia.”

John Vick remembers that as time passed, it became very expensive for the bells to be maintained and repaired. They were eventually sold to a church in California.

Amy Russell Purlin said she would never forget sitting at

the desk in her classroom at the East Three Notch School and hearing the bells chime on special occasions. She could also often hear them late in the afternoons if she was out in her yard at the Russell home on the corner of East Three Notch and Stanley Street. She added, “The carillons were definitely a part of Andalusia history.”

It is remembered that on November 4, 1979 Mrs. J. G. (Ruth Leona Gibson) Scherf passed away. Granddaughter Aurelia Scherf said that she had told her grandchildren that she always had hoped to live to the age of 90, and she did. Born on October 13, 1889, “Nannie” as she was called by the grands, lived a couple of weeks past her 90th birthday. Her funeral service at the First Methodist was concluded by a poignant chiming of the carillons.

The bell tower today is silent, but many of the older citizens can Remember When the beautiful melodies rang out across the town – a sweet memory of yesteryear.