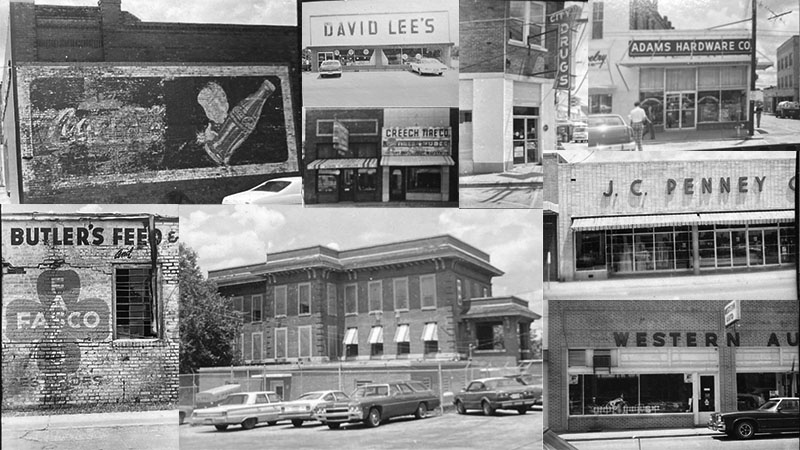 1975 was the year before the Bicentennial celebration across the nation in 1976. The late Caroline Seale Cavanaugh was the Executive vice President of the Andalusia Area Chamber of Commerce.

During July 1975, representatives of the Downtown Action Committee of Andalusia requested some assistance from Auburn University’s Department of Architecture in the form of a student study that assisted Andalusia in the revitalization of part of its Central Business District, particularly around the community’s “City Square.”

Ideas were sought for a better and more beautiful downtown Andalusia, the county seat of Covington. The Committee was willing to underwrite student and faculty travel expenses as well as materials and supplies needed for such a project.

The administrations of the Department and of the School of Architecture and Fine Arts determined that a study of this nature would be of value both to the education and community service goals of the Department. Students could certainly gain experience in working with an actual client interested in urban design.

Professor Samuel P. Snow, AIP, faculty advisor of the Landscape Architecture Department led this study undertaken by students in their fourth year of architectural design. This pilot study took place in the Summer Quarter, 1976, of the school’s academic year.

The sites were visited to investigate the nature of existing conditions. The local clients were interviewed to discuss the perception of the problems. Available data was assembled including history of the relocation of the county seat from Montezuma to “New Site” in 1844.

Extensive pictures were taken of various storefronts and scenes around the Central Business District in the vicinity of the Court Square. The vacancy rate of buildings was evident. It was believed that there could be a revitalization of the CBD, public and private, resulting in a continual improvement in the economic life of the area.

Drawings were made by the students with a concept stressing pedestrian accessibility, parking ideas, and planting for aesthetic purposes. A program of the final proposal to the Downtown Action Committee, city and county officials, and interested citizens was presented for review and comment.

William Tunnell, Jr. was chairman of the DAC consisting of 40 downtown business owners.

This file was recently found tucked away at Three Notch Museum. Shown here are just a few of the pictures taken by the student group which we can perhaps Remember When our downtown looked like this.

As time passed, other study groups came to town with additional suggestions for historic preservation of storefronts and new solutions to bring the landscaped park or a Spanish-style plaza back. We can all agree that “We’ve Come a Long Way, Baby.” Enjoy these pictures of almost 50 years ago. Next week, I will share some information from McDonald and Baker, Architects, regarding the re-development of the downtown shopping area with interesting comments and memories from those guys (Johnny McDonald and Douglas Baker) with hometown ties.  You’ll love it!