Remember When: The days of Don’s Record Shop 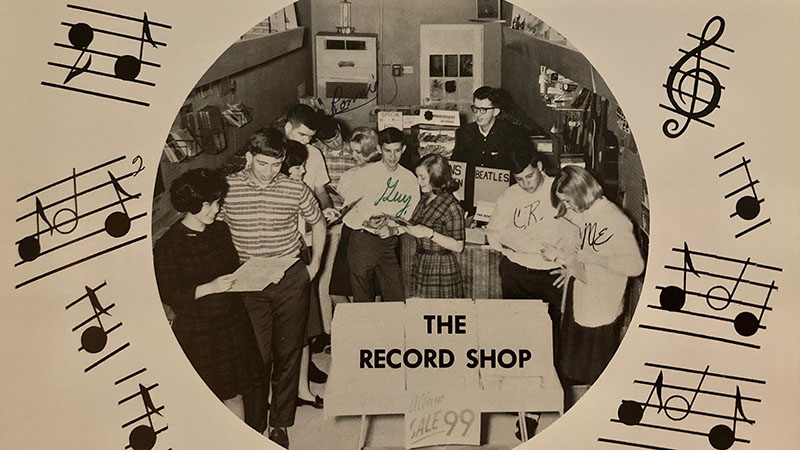 In the 1930s and 1940s, my mother and her friends bought many a 78 record from the O. C. Wood Amusement Company at their storefront on South Cotton Street. In addition to their records, Mr. Wood also sold juke boxes and popcorn machines to restaurants and bars. After he retired or “slowed down,” his daughter Mildred who married Donald Cook (in the electrical business) operated The Record Shop who had moved to East Three Notch on the Prestwood block. Adjacent to Finley Jewelry, The Taylor Shop, Benson and Co., and Star Cleaners, it was a narrow building but also deep. Some say that the space may have been at one time an alley way.

In 1962 Don Parsons bought the business and changed the name slightly to Don’s Record Shop. In addition to the 45 rpm records and 33 rpm albums, he also offered for sale guitars, strings, and picks. Mono records were sold for $3.98 and stereo ones for $4.98.

The teens frequented his store, but he had customers of all ages especially at Christmas time when parents would come in to buy records for their children and their families. Parsons remembered one parent who came in every Christmas Eve to buy a number of albums for his boys!

Back in the 1960s, there were mostly “Mom and Pop” record shops in most towns across America. Parsons would buy from distributors in Atlanta placing two or three orders a week, sometimes and oftentimes by special request from his customers. Record company representatives would bring in samples of Pop, Country, and R & B (Rhythm & Blues). He wishes today that he had kept every #1 hit in those categories.

“Teens bought more singles than albums,” Parsons states. “There was an outside sidewalk speaker on the storefront and a record was always spinning. Once a man came in and said, ‘Who is the singer on that record you are playing? I want one of his albums!’ It was Charley Pride, the new country music singer that really took off. (‘Is anyone going to San Antone or Phoenix, Arizona….. ‘) I ordered 25 of his albums.”

“I remember ordering some ‘calliope’ music for the Portemonts who used that sound in their carnivals. Johnny and Marilyn were good customers.”

“In 1963 the Beatles single was released, ‘I Want to Hold Your Hand.’ I ordered and reordered that 45 record over and over because the students went crazy!”

Don was so popular with the teenagers. He expected and looked forward to a crowd to come in every afternoon after school. He stated unequivocally that Elvis was definitely the #1 artist. “Those hits really sold,” he remembered.

Parsons actually met his wife Scarlet Rabren when she walked in the record shop one day. “She twirled in and out without buying anything, so I asked someone across the street, ‘Who was that girl?’ That was in 1962, and they were married in 1964. Scarlet’s sister Sheila helped out at the shop on Saturdays. She remembers “Hang on Sloopy” being played in the 1960s over and over. The customers and the passers-by loved hearing it.

Jim Hutto remembers working for “Mr. Record Shop” from the 10th grade through his junior year in college. He drove home on the weekends from Troy State College and worked on Saturdays. Hutto states, “Don was a great boss. He always said that we were there to make the customers happy. His skills with the public were outstanding. If we didn’t have a particular record, he would order it. He taught me more about customer service than most of the professionals I later worked with throughout my career in higher education. He always made the customers feel welcome and appreciated. Everyone liked and respected him.”

“We had people that came in who would say, “I want that new record I heard on the radio. I don’t know the name of the song or who sings it, but it goes like this……..”

“They would try to sing the tune and remember a word or two of the lyrics. Occasionally we would recognize it, but somehow we would come up with it.”

“Most high schoolers bought 45s except at Christmas when our album sales spiked. Don was ready for the rush, and he stocked the new releases along with the classics. He hired extra help during those Christmas breaks from school.”

“I can remember high school girls coming in on Saturdays with those big hair rollers getting ready for their dates that night. That was just the thing back then.”

“My years of working at Don’s Record Shop were wonderful. I have many fond memories of those days that helped me earn  my spending money for gas and snacks during the week at college.”

Don also served as DJ for many “sock hops” at the high school old gym since he really enjoyed working with the teens. He still has his original box that he carried his records in. Along with the records, he took his turn table and speaker along and sat on the stage above the dance floor. The last song he always played at the dances was Percy Faith’s “Summer Place.”

“Those days of being in business in downtown Andalusia was great. My store was located just one block east of Court Square right across from Western Auto. Saturday was a big shopping day in downtown. Many times we would order a lunch plate from Johnny Crenshaw’s diner on North Cotton Street. Fried chicken, candied yams, rice, and light bread was delivered to us. I guess they delivered all over downtown. It was delicious!”

“I was in business at the record shop from 1962 through   1979 when I sold to Mary Ann Cope. She later sold to Lehn Lambert who operated in the Covington Stores block on the square.”

Parsons and his “DJ-ing skills” must have rubbed off on Hutto for I remember the 20th reunion of the Class of 1965. We thought we had hired a DJ that had been engaged for the evening. When he appeared, he was a mysterious wooly-bully looking character with a beard and sunglasses and a hat pulled way down. After he had played a number of songs, he suddenly removed all disguises. Low and behold, it was our classmate Jim Hutto!

Don Parsons says today, “Well, the turn table record player is making a comeback. The 45s and 33s were eventually  replaced by the 8-tracks, then the cassettes, then the CDs. Wonder what’s next?”

I am planning to get my record collection together soon with my Elvis records, Johnny Cash, Ricky Nelson, Brian Hyland, Fabian, Lesley Gore, Skeeter Davis, Chubby Checker, Johnny Mathis, Peter, Paul, and Mary. Maybe I’ll go to the “Antiques Road Show” one of these days! The young people today don’t know what they’re missing without having enjoyed a downtown record shop. Maybe some of you readers can Remember When Don’s Record Shop was THE PLACE to go after school to buy the latest hits to take home to play over and over on your stereo!