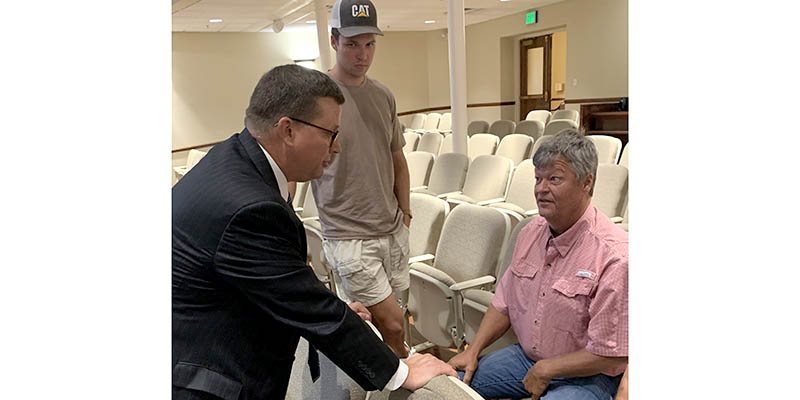 They discussed some key issues at hand and allowed citizens to ask questions afterward.

“It’s good to get back where we can have a meeting and we can gather in a group to talk about issues and what all is going on with our state. It’s good to be here and meet with you again,” Jones said.

He said he first began holding town hall meetings the first year he ran for office. “Senator Jimmy Holley has been in attendance at every meeting and I can’t tell you how good that is. It’s not every House and Senate members have good relationships in the legislature but we are blessed. We have a great Senator who’s been working for us 44 years. It helps me to work with someone who has that wealth of experience and that much legislative knowledge,” Jones said. Holley thanked those in attendance for having him. 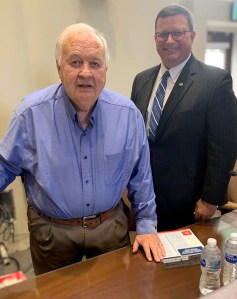 Jones first discussed the pandemic last year when it first became news. “When this first started, it caught us off guard. We started hearing about the virus and were not sure how to handle it. After reading about it, we all agreed it was extremely important to complete the budgets for our state. We focused on budgets and were one of the few states to do so, which proved to be an important thing to help the state.”

According to Jones, the state budgets were really much bigger before COVID but changes were needed. He said, “We scaled back a good bit and although we still had growth, we wanted to be prepared for the worst and not the best. The House and Senate worked together preparing for the last session. We wanted to make it the safest environment we could. The building we hold our sessions is not the best-case scenario as far as COVID restrictions. Accomplishing social distancing and working with people the way we are accustomed was virtually impossible in the space we had. Based on guidance from the CDC and Public Health Officer, we completed the necessary protocols we could in order to have a session.”

Holley also shared his thoughts on the precautions the state took. “Anytime you have a large group gathering, security is the individuals. The building itself and different meeting rooms did not mend well for security. We will hopefully address that.”

Jones said the interaction with the public was almost entirely audio and visual. He spoke about the state updating equipment to help better suit the needs of the citizens at the last session. “We tried to upgrade our system with broadband, which had a fee and also updated our audio/video equipment. We did our best to update on the equipment in the meeting rooms and on the floor to provide the best quality for the people of the state.”

He said the last session began February 2 and ended May 17. There were 648 bills dropped in the House and 405 in the Senate for a total of 1,053 bills. Of those, 270 passed in the House and 230 in the Senate. A total of 358 were transmitted to the Governor, according to Jones. “Even with the challenge our state faces, our budgets and revenues continue to grow. It allows us to continue and provide services.”

Jones said the Education Trust Fund budget for the 2022 regular session is $7.67 billion, which is $455.1 million more than the previous year. “The education fund is based on a rolling national average. To have that kind of growth is significant. One thing we addressed right off the bat is two percent pay raises for all state and school employees. Coming out of COVID and having the budgets to do the raises was a big deal. That was something we were glad to do for our state employees and school officials,” he stated.

According to Jones, 51.3 percent of all state funds appropriated go to the education budget, which ends up being about $7.5 billion. The next large amount goes to Medicaid and is 14.3 percent, which is $2.09 billion. Transportation has 5.8 percent of the budget, which comes to almost $850 million. The Department of Corrections gets 4.5 percent of appropriated funds, which is roughly $657 million. Mental health is the next one on the list with $406.3 million. “I always like to give this information for a reason. It gives perspective of what the state’s priorities are. By far, the biggest priority is education followed by the health and welfare of our state.”

Holley said all of those are focus areas in which the state looks at and was concerned about them being federal money. “The money I just discussed has no federal money included in the numbers. All of the federal money is in addition to what I discussed. That’s a good point Senator but all of this is from our funding and does not come from the federal government,” Jones said.

Jones and Holley opened up the floor to the public who shared various concerns and issues. Citizens outlined the issues regarding the county jail and the intersection of Highways 84 and 55. An additional citizen requested to know Jones and Holley’s plans moving forward with several legislative openings in the future.

“I have an exciting future and hope to live several more good years. To accomplish that, I need to have a little problem in my back corrected and then am going to spend time with my wife and two grand boys. I have been thankful to be able to go to Montgomery all these years. All of the topics the last several years have been profound and it has been a pleasure serving the area and Covington County,” Holley said.

Jones said there are a lot of things moving and changing but has not made any final decisions on his plans. “I’m actually evaluating and trying to decide on things now.” He said these types of talks usually start with his wife and family. “I am going to have some more conversations with them about that and to be frank, I started this job with a prayer. I’m going to probably be doing the same thing and talk to my wife to see where we go from here,” Jones shared.

“Thank you all for coming and if you have questions, we are accessible. We publish our numbers and I’ve only had one number since I’ve lived here. If you text me, that’s probably the best way to reach me. I may be in session, but I’ll put my phone up there and see them as they come in. We appreciate it and thank you again,” said Jones.