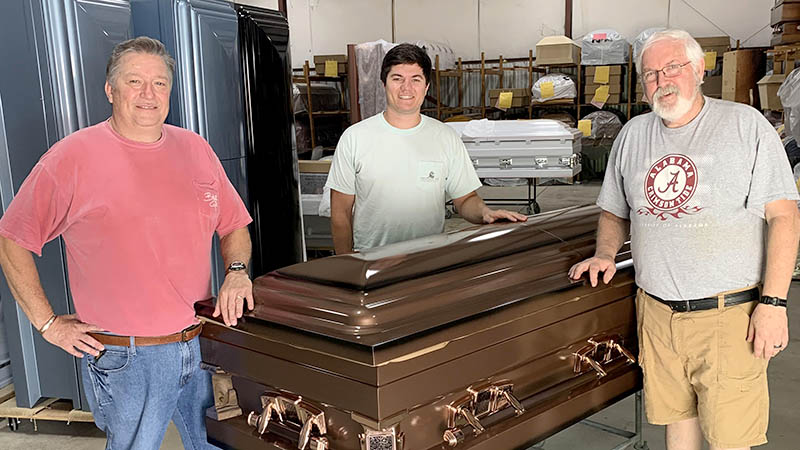 Alan Williamson, Andrew Williamson, and Frankie McVay proudly show off one of their custom-made caskets as they prepare to move their stock to the business’ new location.

“When one door closes, another opens” will soon be the case for one local business literally.

After 96 years in the same building, Covington Casket Company is expanding and moving to a new location. The final day of production in the current building was June 30. The first day of operation at the new facility near the airport at Industrial Park is scheduled for July 12.

Owner/operator Alan Williamson said the business first started in Opp in 1924 and moved to Andalusia in 1925. “Although production has ended, we will still be here a week or so moving equipment out to the new place.”

An opportunity to grow came a few years ago, according to Williamson. “It all developed a few years ago when I bought another casket company’s equipment after they went out of business outside of Atlanta. On the way back to Andalusia, I got to thinking about where to put it. We thought about building on here but are landlocked. I began to look for a building and contacted Andy Wiggins and Mayor Johnson. It just so happened the city had a building and helped me acquire at the new industrial park behind Lake Armstrong on Progress Drive,” he said.

Williamson stated he was not looking for all of this to transpire how it did and thought he would be there for a while. “When that gentleman called me about two years ago to buy that equipment, I felt like the good Lord had opened up a door and it was time to take a step. It all started when I got that phone call.”

He has mixed feelings about the transition. Williamson said, “It’s sad because we’ve been here since 1925 and I’ve been here 1986 with my dad, the late Johnny Williamson. It’s just like home and I’m sure I’ll turn down this street a lot before I even go to the other place. It’s hard to leave it but I’m excited and we’re on to bigger and better things.”

Plant foreman Frankie McVay discussed the historical significance of the business. “Mr. Alan is my fourth boss man since I started here in 1978. I’ve been here my whole life and Covington Casket has been good to me. I’ve been able to raise my family and have a lot of friends because we are family-oriented.” McVay likes the fact he and his employees work together as a team. He said they don’t think so much about making caskets but more so helping families in a time of need. “My dad has gone on, your dad has gone on, and we take a lot of pride in what we do here. We make caskets anywhere from 2 feet long to 7 feet long or whatever the family needs,” he stated.

Over the years, McVay said a lot of people do not realize their caskets are all custom-made. “It sounds crazy but if they want a yellow one shaded green, that’s what we do.” He said he has been asked before if he hopes someone passes away in order to garner business. His response was no because we all eventually move on but hoped they would consider a Covington casket when they do. “These folks work hard and have a lot of pride,” he said.

McVay said the folks who were there when he began in 1978 took new employees under their wing and taught them the craft. He hopes the current workers are teaching the ones coming on the art of the business. “To have someone come up to you at the funeral home and say the casket looked really good means a lot. It is what we strive to do here. It’s a great atmosphere and you wouldn’t think Mr. Alan owned a company because he is a people person.” He said Williamson not only cares about people but also his employees and their benefits. “I don’t know if it’s the best place in the world to work because I’ve never worked anywhere else,” McVay said.

According to McVay, there is a lot offered to employees who choose to work for Covington Casket Company. “A person who wants to have a family-type atmosphere and can make it here gets several benefits. We have insurance, retirement, and paid holidays.” He said they have a prayer every morning because they know without God none of it would be possible. “It’s all about Him and he has really blessed this company with good employees who know what they are doing,” McVay said.

From the start, he mentioned making a lot of friends who are funeral directors. “I had an uncle (Aubrey Mills) working here in 1978 and Mr. Johnny (Williamson) sent word by him if I wanted to work to be here the next day.  There were no applications or background checks and we just went to work,” McVay said. While cleaning out his desk, he said he found some old pictures and they brought back many memories. “I was told when I first started that if I wouldn’t put my mother in this casket, it doesn’t need to go out this door.”

McVay said each individual knows his or her role, which helps make up the team. “They know what to do when that casket comes down a conveyor line. If one person gets caught up, they go help someone else. That’s where the team effort comes in.” In addition to custom-made caskets, Williamson is putting in a big embroidery room. “Today, you can get just about anything in the head panel from a bass fish to a fire truck and race car. Years ago, we had basically four colors: pink, blue, silver, and brown. Now, some of the caskets actually get those colors on it and some are even pinstriped,” McVay said.

As they ready for the new location, employees are excited to begin the next chapter at Covington Casket Company. “There are a lot more memories to be made. It’s the little things we do other companies don’t do. When I’m not happy, you’re not happy and I pick you up. When I’m happy and you’re not, I pick you up. That’s what we have here,” McVay said. For more information call 334-222-4745 or visit www.covingtoncasket.com.

Remember When: The Fourth of July through the years…