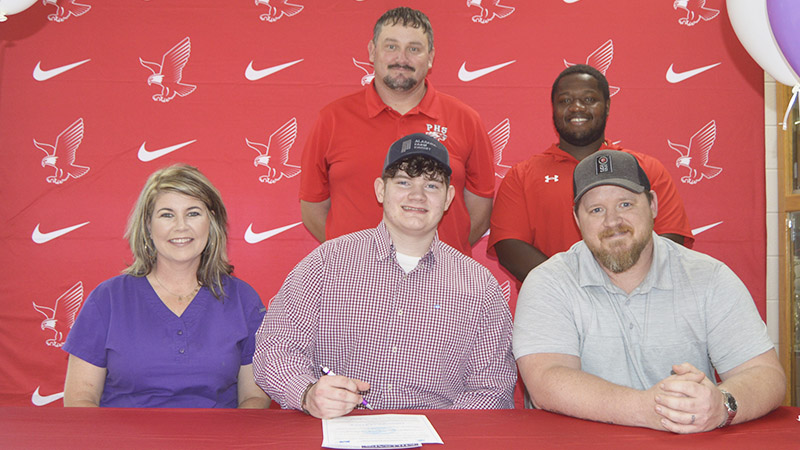 When Gavin Morrison walked off the football field as a player for the Pleasant Home Eagles last October, he said he did not want it to end.

Fast forward eight months later and he was right with a dream coming to light. Morrison signed his National Letter of Intent June 30 to play football at Millsaps College in Jackson, Mississippi.

He is extremely grateful to have the opportunity of continuing his football career. “I have always dreamed of playing college ball. With statistics showing that less than 7.3 percent of high school football players go on to compete at a college level, I thought it was going to be near impossible. I am grateful that I get to continue doing not only something I dreamed of but something I love while continuing my education.”

Morrison has a “plain and simple” reason why he chose Millsaps College. He said, “It reminds me of Pleasant Home. They have a great student to faculty ratio and are ranked in the top 14 percent of colleges in the United States.” He said he was going to miss his PHS family very much. “My teammates are more like family than just friends. I will also miss my teachers especially Mrs. Taylor Kelley. She started here my junior year and was always willing to listen when I needed someone to vent to. She gave advice when I needed it and was never afraid to laugh with us.”

He feels it will be a big adjustment making the transition from high school to college. “We are a small town. Anytime I leave my house, I am going to see someone I know. Jackson is probably 40 times bigger, and I won’t have my family or friends with me,” he said.

Morrison said there were a lot of people he wanted to credit for his success thus far. “First and foremost, I want to thank God for blessing me with the opportunity. I always try to remind myself of Philippians 4:13, which says ‘I can do all things through Christ who strengthens me.’” He acknowledged his teammates for always picking him up when he fell, never giving up on him, and sticking together. He expressed how his friends always supported him.

Robbie Barton, one of his youth coaches, was also an inspiration. Morrison said, “He believed in me when I was one of the smallest kids on the team. He taught me and pushed me to be better, was never afraid to let me know when I was falling short, and never made me question his love for me.” He said his dad helped him grow as a man teaching him how to take a hit and give it back. Morrison had nothing but praise for his mom while growing up. “From the time I started playing football, she has been by my side literally on the field and off. She has driven not only me but also teammates to football camps. She also supported me in my decision-making and is my biggest fan.”

Morrison also showed gratitude for his bonus parents and siblings. “I’m blessed to have a stepmom and stepdad who love me and support me just like I was their own. Without the love and support from my siblings, I wouldn’t be where I am.” He had high regard for Coach Jeremy Silcox and Coach Reggie Hamilton. “These two will never truly understand the impact they have had on my life. During some of the hardest decision-making times this past year, they stood by me and reminded me they supported me no matter what. They never gave up on me even when I had thoughts of giving up on myself. They believed in me.”

Silcox and Hamilton took a few moments to share their thoughts. Silcox said, “Gavin was always one of the backbones of our football team and kept us together. He was always positive of the other players who loved playing with him and was an all-around good teammate. I hate he’s moving on because we’ll miss him but we’re very proud of him and what he is going to do in life.”

Hamilton mentioned how it was big to have him on the team since he first joined his ninth-grade year. “We wanted to give him reps to see what he could be in the future and he started to shine a little bit. He had the work ethic and started to grow into a size he did not have in the beginning. He convinced a lot of kids to come out and give it a shot. With these big numbers we are expecting this coming year, a lot of that is attributed to him,” he added.

Morrison is the son of Mark Morrison and Jessica Hart. He will head to Millsaps College in a few weeks and begin his next adventure but will always have his home at heart. He is expected to play on both sides of the ball as a lineman just as he did at PHS. “I was once an Eagle and am always an Eagle! I’m excited to see how far I can grow as an athlete, student, and person,” he said.