Remember When: Gantt Lake on the Fourth

“Mercy me. Slow that motor boat down,” “See all the flags waving on those piers,” “Jump right in and swim. Don’t pay any attention to those water moccasins,” “How many people are on that pontoon boat,” “Look at that sunset,” “Look what that man skiing on the slalom is wearing,” “Karaoke at the campground at 8:00,”  “Meet you back at the boat launch,” “Campfire sing-a-long tonight,” and “How many did you catch today?” All of these phrases could be heard up at Gantt Lake on the 4th of July.

Gantt Lake according to “The Heritage of Covington County” is a 2,200 acre lake that was originally built on the Conecuh River to provide electricity for the citizens of the town of Gantt. The Gantt and Point A hydro-electric dams and plants now provides electricity for the Southeastern United States. Facilities on Gantt Lake and Point “A” Lake have been developed by Alabama Electric Cooperative now called Power South. 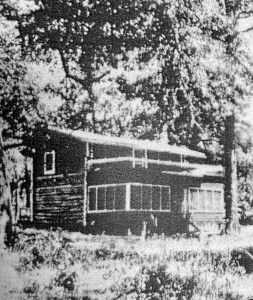 This area of Covington County attracts fun loving folks to a relaxed southern life of leisure on the Conecuh River. The lakes are the home of water sports including boating, fishing, skiing, and swimming. Fun and excitement is always created for the locals and visitors who come to camp in the campgrounds or relax in the cabins and homes now built on the shores of the lakes. Many a family reunion and class reunion have been held at the Point A (AEC) Lodge. (The best party I ever went to was held at the Point A Lodge the night before an Auburn-Alabama football game!)

It is remembered by old timers that the first cabin built up on the lake was by Dr. and Mrs. S. C. Hamner described by historian Sidney Waits as “on the banks of the impounded waters of Gantt pond.”

Waits quoted a front page article from the July 26, 1934 edition of The Covington News, “One has to visit this summer resort to enjoy the hospitality which abounds and view the beautiful area to grasp an intelligent idea of picturesqueness (sic) of the whole layout of the premises consisting of a two-story log cabin with a screened BBQ pit. These buildings  are  located in the midst of a beautiful grove amid rock cliffs near a bold boiling spring where free stone water flows in abundance that requires no ice. One can sleep in quietness except for the peculiar, loud shrill sound of the katydids, only to be aroused in the early morning by the first lays of the red bird. The place ought to be named ‘Hamner’s Paradise.’”

The Andalusia Star – September 27, 1934 – “It is reported to The Star office on good authority that a large water moccasin took refuge in the trouser leg of Mr. Jodie Maynard when he fell asleep while fishing on Gantt Pond some time ago.”

“It seems that Maynard, a resident of the Antioch Community, had picked a comfortable place to sit and fish letting his feet dangle in the water and had fallen asleep. A motor boat frightened the snake causing him to seek a hole. From all reports, the snake is still wearing the breeches!”

The Andalusia Star – September 11, 1941 – “One of the most beautiful scenic routes of travel in this area now is the highway leading from Andalusia via Gantt to Dozier. This highway which has just been paved through Covington skirts Gantt Lake for some three miles and offers to the discriminating observer a panorama ever changing and ever beautiful. With the placid waters of the lake to challenge your interest, you have a treat that serves as a tonic to tired nerves and gives you a new feeling of kinship to Mother Nature.”

“If we do not miss our guess, the land bordering this highway along Gantt Lake will be used for home sites at no far distant day. Be that as it may, the whole area is one for you to enjoy without effort if only you get in your car and drive leisurely over the fifteen miles that intervene between Andalusia and Dozier.”

Some of you may Remember When the view could be seen for three miles. Clearview is mostly that outstanding view we enjoy today.

As far back as February 8, 1927, news articles reported gatherings at the lakes such as this one in The Andalusia Star.

“Mr. Carl Herne delightfully entertained the members of the Gibson (Training) Union of the B. Y. P. U. with a picnic at Gantt’s Lake on Friday afternoon. The young people left town about six-thirty chaperoned by Dr. L. E. Barton (First Baptist pastor), and arrived at the post just as the sun was sinking in the West. From the bluff where the lunch was spread, the scene was indescribably beautiful. Weiner roasting and joke telling furnished the amusement for the evening.”

Yes, the vision of the writer in 1941 was right on target. Cabins and mobile homes and even year-round homes are located on the banks, bluffs, and shores of Gantt and Point A Lakes. There is nothing like a “stay-cation” right here in Covington County on the 4th of July – no traffic, no trouble, no noise except passing boat motors and a firecracker or two. We are blessed to have recreation with friends and neighbors on our Covington County lakes. This year was no exception. If you don’t believe me, ask our colorful friend and Covington countian Johnny “Speedo” Harper!