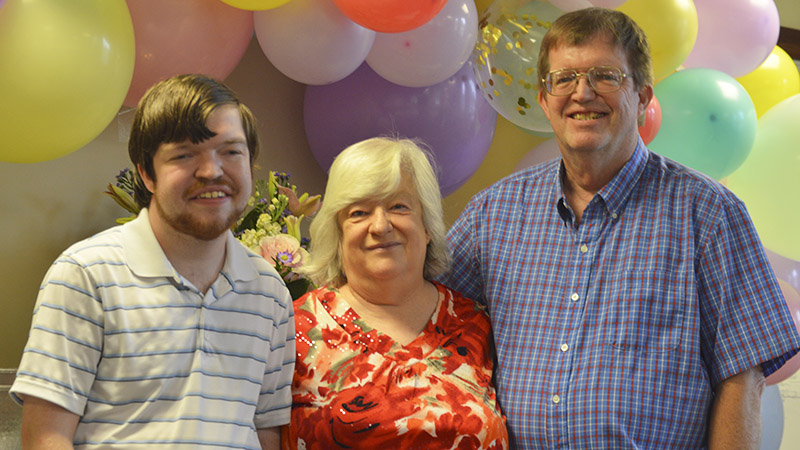 After 41 years of employment with the City of Andalusia, Teresa Stephens celebrates her retirement with her husband Blane and son Matt.

Stephens retired from the City of Andalusia following 41 years of employment on Wednesday, June 30. Her coworkers threw a retirement party in her honor Thursday morning at Andalusia City Hall.

She said there have been numerous changes since she first started. “It has grown a lot and there were only five of us in the beginning. The technology has also come a long way since the earlier days.”

Stephens said there was not a single accomplishment that stood out after 41 years. She was thankful to build the relationships she built with her coworkers. “It has been very enjoyable to be with all of these good friends. I have really enjoyed working with them and the city,” she mentioned.

She said she would miss being with her friends the most. She said, “There are three of us (Kay Sasser, Shirley Cannon, and Valerie Mason) who are all about the same age and retired around the same time.” They have plans to keep in touch and do activities together. “We’re going to go out and eat as well as do some shopping together. We also plan to meet up and have monthly outings. These moments I’ve had with them are priceless and I wouldn’t trade the times spent with them for anything,” Stephens said.

There are a few bits of advice she would give to future employees. “Take care of each other, be willing to learn a lot, help each other, and you can get through anything.” Stephens said several people in her time have helped her but thanked supervisor Cathy Alexander for being so wonderful.

Her retirement plans include spending time with her family and doing some hobbies. “I want to go visit my son Andrew and his wife Victoria in Jacksonville, Florida. I may even take online classes and also do some painting,” said Stephens. She is married to Blane Stephens and has two sons, Andrew and Matt.

Utilities Supervisor Cathy Alexander was appreciative of the services Stephens gave and praised her character and work ethic. She said even Stephens trained her when she arrived 16 years ago. “She has been here 41 years and is extremely knowledgeable in all aspects of utility. Her character and integrity are just impeccable and she is committed to the best interest of not only her employer but also her customers.”

Stephens put her customers’ interests first and made sure to give them the service they deserve, according to Alexander. “Her multitasking and working at a fast pace were extraordinary. She deals with electric, water, and sewer crews out in the fields.”

Her communication and ability to deal with difficult situations during storms made her stand out as a decorated employee. “She has worked numerous hurricanes through the night and also on weekends and holidays. She would leave her family at home to come work holidays. She also worked after hours in dispatch and has been a real key player in taking care of our customers after 5:00. She knew when to dispatch crews and was very seasoned. She is a joy to manage and work with. I’m happy for her but it saddens my heart I’m not going to see her every day,” Alexander said.