Crigger retiring after over 40 years in music ministry 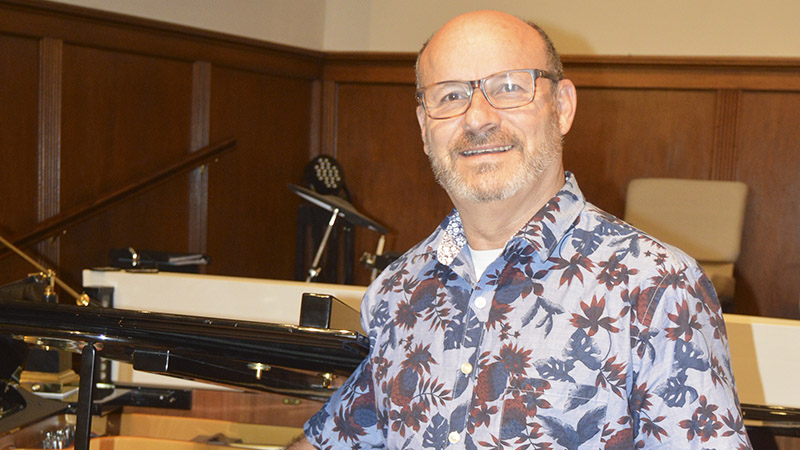 Dwight Crigger is retiring after devoting over 40 years to music ministry.

Dwight Crigger truly believes how God uses each one of us for His purposes is special.

Since 2007, he has served as the Minister of Music at the First Baptist Church of Andalusia. After 40 plus years, he is retiring from the church with his last service scheduled for Sunday, July 25 at 10:30 a.m. A reception will follow the special celebration.

Crigger said he grew up in a very loving home full of laughter and joy. “We were in church as far back as I can remember. I was raised in the Southern Baptist Church and loved music early on. I can remember singing in Sunbeams on Wednesday nights and then singing those songs later in the week as my siblings and I would be playing.” For most of his school years, he and his family lived in Memphis and attended Colonial Baptist Church, which was a large church with a very active music ministry.

He credits the Minister of Music Perry Robinson for being one of his biggest inspirations. “He saw in me what I did not see in myself. He took time to privately teach me notes, rhythm, conducting patterns, and so on,” Crigger stated. His father was transferred from Memphis to Senatobia, Mississippi, in the summer before his final year of high school. When the family arrived in Mississippi, they found a new church home at FBC Senatobia where he met Farley Earnest. “He asked me to sing a solo and that opened the door for a full scholarship to Northwest Mississippi Community College. I found out the day of registration I had to major in music in order to accept my scholarship.”

After finishing there, Crigger entered Mississippi College where he was offered another scholarship. Upon receiving his bachelor’s degree, he went to the New Orleans Baptist Theological Seminary and received his master’s degree in Church Music. His first church out of seminary in 1981 took him to FBC Ashford in Alabama. He said, “I was there over 6 years and was accepted into their family. I still have very fond memories of my time there and lifelong friendships, one of which was pastor Dr. David Tew.”

Crigger’s next place of service saw him remain in Alabama for a move to FBC Geneva. He served there over 11 years and formed a friendship with Ray Burdeshaw whom he invited to his home for a week. “After spending that week with me, he wanted me to meet a special young lady named Sonia Sewell. We went on a blind date and I knew she was the one for me.” The couple married in 1991 and two years later had their first child, Callie-Marie. 14 months followed and the family grew again with the addition of their son, Carl. “With our family complete, we continued to serve under two different pastors.”

While in Geneva, he explained how his sister was going through a rough time in Memphis and needed to get away. Crigger received his parents’ blessing to move her in his home until she could get back on her feet. He said she eventually got her own place before tragedy struck for the family and church. “My niece Kristi was killed in a horrible automobile accident. This took its toll on my ministry because church members were involved. It was clear to me that God wanted us to move to a new place of service,” he said.

The family left Geneva for Central Baptist Church in Lawrenceville, Georgia. Despite staying there only 3 years, Crigger said he had some of the best coworkers and it allowed his wife to complete her master’s degree. It was also convenient because his children were young and in school right across the street from the church. “In my tenure there, the choir became larger than it had ever been. We learned how to do a weeklong summer music camp. We still have lifelong friends from those difficult years and although it has been over 25 years, I still have a picture of the guys I served with on staff,” Crigger said.

Crigger and his family then moved to Sandy Plains Baptist Church in Marietta, Georgia. He said, “Those were some very fruitful years of ministry and we enjoyed raising Callie-Marie and Carl in a very loving, nurturing fellowship. I was on a mission trip with the Sons of Jubal in Russia when Dr. Jim Krudop was trying to get in touch with me. Ray Burdeshaw had given my name to FBC Andalusia as a possible candidate for the Minister of Music position.” He said he received a call from Jeanice Kirkland one Sunday asking to go eat with her and her husband Jimmy. Crigger said she reported back to the search committee about him being the man God led them to.

“We had a place at the beach and during the summer were on our way back to Marietta. We decided to drive through Andalusia and I called the pastor to let him know. They quickly set up a short meet and greet, which lasted over two hours. Our children were not ready to move from all their friends. Callie-Marie was in tears and said, ‘Daddy, please don’t do this to us.’ After the meeting, we were driving away from the Krudop’s home and Callie-Marie said, ‘Daddy, it is okay. These people already love us.’ I am honored to have served here under three servants of the Lord: Dr. Fred Karthaus; Dr. Bill Montgomery; and now Dr. Kevin Wilburn.”

Crigger says the Lord has made it very clear to him the time has come to retire. He plans to spend time with his new grandson Winston, his children, and his wife. “There are no perfect churches or perfect ministry opportunities because we are all human. FBC Andalusia has been a joy to be a part of for over 14 years.”

For more information call 334-222-5152 Monday through Friday from 8 a.m. until 4:30 p.m. The First Baptist Church is located at 700 East Three Notch Street in Andalusia. “I truly believe the best days are ahead for this church and community. Please continue to serve Him faithfully and add me to your prayers as I transition to a new normal. I invite everyone to come out for my last service and enjoy some great music,” Crigger said.