Cheerleading is a team-based sport that takes skill, dedication, and love just to name a few. Cheerleaders each year work hard to learn new stunts and routines as well as develop chants and cheers to encourage and motivate their favorite team.

This year was no different for the Andalusia High School and Straughn High School varsity cheerleaders. Both squads attended the UCA Panama City Beach Cheer Camp in June.

SHS sponsor Christy Carter enjoys spending time with her girls. “I have been involved with most of these girls over the last 13 years. For some, I was their sponsor in youth cheerleading for several years. They are a lot of fun and keep me young. My co-sponsor Misty Barnes and I enjoy helping each girl see that the title as a ‘cheerleader’ is more than just pom-poms and hair bows. We are trying to help them be positive role models, friends, and leaders. We want them to have and promote school pride and school spirit.” 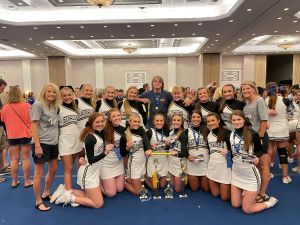 This will be the third year as sponsors for Carter and Barnes. “We had a very fun and successful camp. These girls learned a lot and really came together as a team to make it very successful. They were always one of the first squads in the conference room each morning and always one of the last ones to leave each evening. They practiced on their off time, even in the parking lot at 11 p.m. one night. Each member of this squad was determined to do their best. Their hard work paid off and they came home with a lot of hardware,” they said.

AHS sponsor Candace Smith loves being a part of the family. “Cheerleading is as much a mental challenge as it is physical. It won’t just place many demands on your body. It will challenge your way of thinking, too. You’ll become part of a group that will strive to think and act as one. I watch the girls learn to think about the team first and base their decisions on what’s best for everyone. They have become a second family. Although we may disagree sometimes, there are many more items we have learned to compromise.” Smith said she was the assistant coach many years ago and took a break before being named the head coach in November 2020.

According to Carter, SHS placed first place in the cheer and sideline categories and earned third in the Camp Champion ranking. They received spirit sticks all 4 days of camp and superior ribbons on all their evaluations. Straughn received the “Top Banana” award on day one, which is given by the UCA instructors to the squad they feel shows the most spirit, hard work, and all-around great group. Callie Carter, Raley Barnes, Savannah Lawson, and Jamisyn Wright were named All-American Cheerleaders. In addition, Erika Bryan, Carter, and Lawson received “Pin It Forward” awards given to cheerleaders who portray leadership, spirit, commitment, kindness, and motivation.

“Our mascot Taz, Stuart Nelson, also received several awards as well. He worked very hard and really came out of his shell at camp. He was named All-American, the Most Spirited Mascot, given the ‘Mushy’ Award for being the most outstanding mascot of the third day, and received a spirit stick each day of the competition,” Carter said. Smith stated AHS received four trophies and earned superior ratings on all of their evaluations. “We were second in game day and overall performance and then got third in both cheer routine and rally routine.”

Each sponsor agrees being a positive role model is key. “Our squad is very fortunate in the fact that each girl already has strong role models in their lives. Misty and I try to be those ‘extra’ positive role models and their personal cheerleaders,” Carter said. Smith wants her squad to feel like they are worth it. “Cheerleading is more than yelling on the sidelines and shaking your pom-poms. It’s a commitment, a dedication, and an attitude. I want them to see that commitment in me. Cheer will change their life in many ways but anyone that has ever been one can attest to the fact that it’s worth it,” she said. 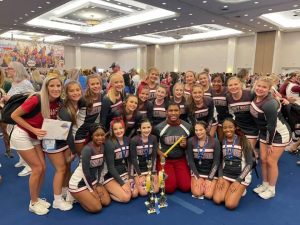 “We are looking forward to shaking things up a bit and showing what they are truly capable of by showing off our new building skills we learned at camp. We have been working so hard for the past few months,” said Smith. Carter discussed the importance of returning to normalcy and getting back in a rhythm. “We are excited about having pep rallies back, promoting school spirit with our dress days, and decorating the halls. The girls always look forward to representing their school by cheering at the football and basketball games,” she stated.

According to both sponsors, it is vital to build character. Carter said, “We set a higher standard for our girls. We expect them to show class and sportsmanship to everyone. I can remember always looking up to the cheerleaders when I was little, seeing my daughter always looking up to them when she was little, and now she is the one they are looking up to. We always tell them that there are always little eyes watching and wanting to be just like you so make them proud. Building this strong character in the squad and community will take them further in life.”

Smith encourages her squad all the time to be a team player. “I want everyone on the squad to feel heard and led to help each other in a positive way. Through cheer, athletes learn to work together to set short-term and long-term goals and build strategies to accomplish them. I want the community to see that character as they watch the girls perform both on and off the field,” she said.