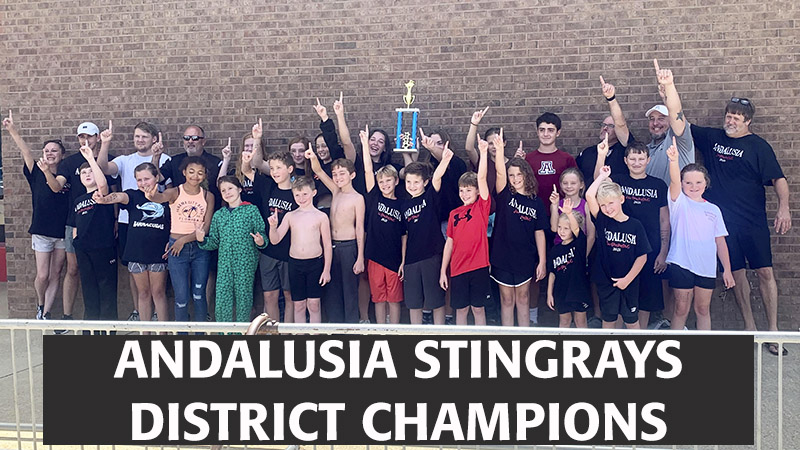 The Andalusia Stingrays defeated Dothan to capture the district title and advance to the state tournament.

Andalusia came out with multiple medley relay wins to get the show started. Once individual events started, 7-year-old Cheston Bass and 10-year-old Joseph Harmond got it going in the very first two individual races with wins in the breaststroke to set the tempo. That tempo lasted throughout the entire meet as the Stingrays led in points from start to finish.

“All I can say is wow! These kids went out there and gave absolutely everything they had. It’s their day! You see I know some may not realize or know the swim world but this is a 5A area taking out a 7A for the championship. That’s huge,” head coach Darren Forry said.

He often states that it takes a village and that Andalusia has the best swimmers for putting in the time and performance. Forry is very appreciative of coaches Brian Shepherd, Andy Shaddix, BJ Donaldson, Eliana Forry, and Josh Hudson. “They all put in countless hours of their own time for these kids and this community. Our parents are also the best! None of us could do this alone and I am proud to say this is your district champion! The support has been incredible.”

Forry mentioned his mentor Gavin Donaldson’s presence and support shows what this team is and still can be. He said, “We are one and only getting stronger. I said we would bring our ‘A’ game and we aren’t one and done. We have goals beyond just this.”

With their district title, the Andalusia Stingrays now turn their attention to the state championships in Albertville, Alabama on Friday and Saturday, July 23 and 24. “There is too much talent in our pool to stop now. On to state we go,” Forry said.