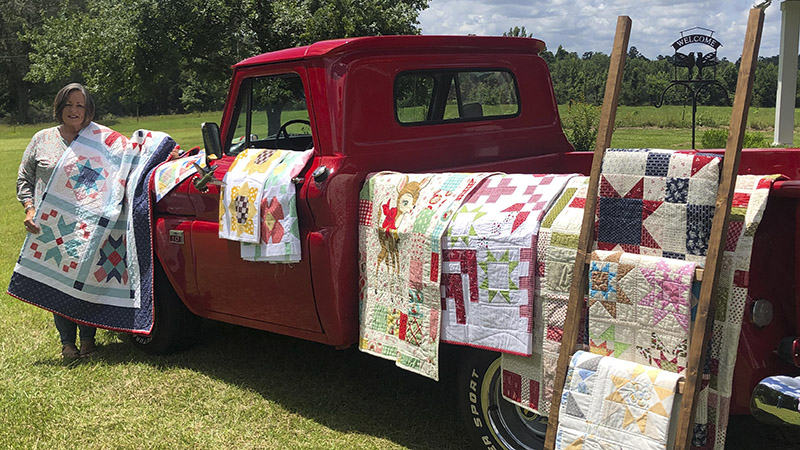 Vicki Clark has found a new love of quilt making after her retirement from education.

Vicki Clark retired from a long career in education, but she is still hard at work doing something she loves: quilt making.

Clark first started sewing at a young age and chose to take up quilting upon retirement from Covington County Schools in 2017. She taught for three years in Lockhart before moving to Straughn Elementary School where she stayed for 23 years. She mostly taught first grade but had a second-grade class in 1994-1995. “I like sewing and working with my hands. I enjoy working on projects and having a product or keepsake when I’m done. I’ve been a garment sewer since my teen years and have wanted to learn to make quilts for a long time. Learning this skill was one of my retirement goals,” she stated.

She said it’s a hobby and one she definitely takes pride in after teaching herself. “I love the creative process of taking colorful fabrics then cutting them into basic shapes and making beautiful new designs. I’ve always enjoyed doing jigsaw puzzles. This is kind of the same except when I’m finished, I don’t take it apart and put it back in a box.” She makes traditional quilts and prefers the old designs and star patterns, which are her favorite. “The Lord has been mighty good to me and my family. I praise Him for his love and mercy,” Clark said.

She learned online and has never really been around anyone who is a quilter. “Last July, I found a YouTube video called Fat Quarter Shop that did weekly quilting tutorials. I started following that and trying the lessons and blocks that they taught weekly. I also found some other YouTube channels and designers to follow,” she said. Clark’s favorite quilt is called Bee Patriotic, which is the last one she made. When asked why, she said, “It was the first quilt I saw on the Fat Quarter Shop tutorial last July. I practiced and practiced and was finally brave enough to order the designer fabrics and patterns to make the quilt. It is by quilt designer Lori Holt of A Bee in My Bonnet blog.”

Clark said her friends and family often ask about her creations. “I sometimes show them on my Instagram and Facebook pages.” She thanked her husband and family for being very supportive of her quilting. “Whatever machine or tool I mention needing, my husband is so sweet and says to go ahead and get it. He also helped me convert my son’s old bedroom into a sewing room. They are all very encouraging and complimentary to me.” Clark also expressed gratitude to her sisters-in-law and mother-in-law for giving her a 1952 Singer Featherweight machine. “It makes beautiful straight stitches and it is so fun to sew and piece blocks with it. The machine belonged to my husband’s great aunt and had been passed down to them. They don’t sew often and when they heard my husband mention we were looking for one, they found one in a closet and I’ve been using it ever since,” she said.

Right now, she said she is still in the learning phase and talked about only quilting for the joy of it. “I only machine quilt at this time and have a long way to go to learn free motion quilting. I’d also like to learn to quilt by hand.” Clark hopes to leave some keepsakes for her children and grandchildren. Her next project lined up will be a quilt for a grandson due in early November. “I retired because I wanted to keep my granddaughter Reagan and have that special time with her. She was almost 2 years old when I retired but babies don’t keep and she started kindergarten last school year. That’s when I started exploring the hobby of quilting and I absolutely love it.”

She resides in the Straughn community with her husband John Clark III. They have three children: Mandi Morris, John Clark IV, and Justin. “Into my sewing room, I go to lose my mind and find my soul. I can forget everything else and just sew and create and feel blessed,” Clark said.