Remember When: Learning from people, homes of the past 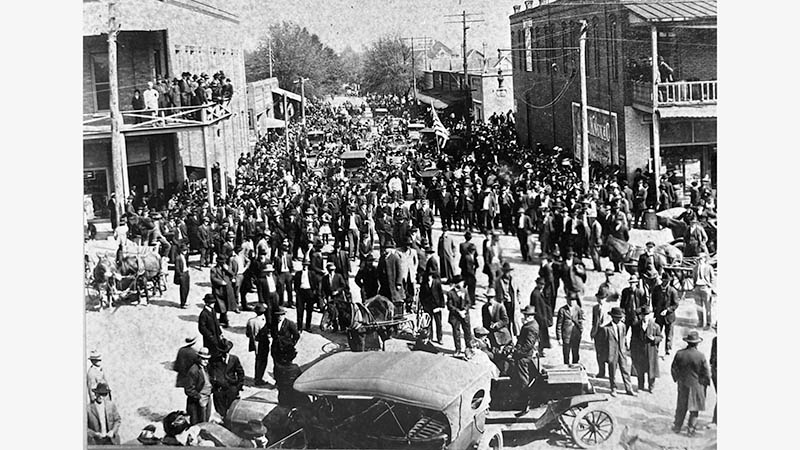 In my time of working in the real estate field, I have had the opportunity to walk through many older homes where different families have lived. Many thoughts can be experienced of how those families may have lived through happy occasions, sad times, and even difficult years. Children were usually born in homes. People died in homes before hospitals. Funerals were often held in the parlors of the older homes. Weddings were solemnized at home.

Pondering life one hundred years ago, I think of luxuries that were not part of households – no washing machines or dryers, no electric or gas stoves, no air conditioning, no vacuum cleaners, and the list goes on. Many of these properties had wells and outhouses or privies in the back yards.

Do walls talk? Are memories still lingering in the shadows? Have the echo of the footsteps of those who walked down these halls disappeared? What can we learn from stories of the past about those who resided here? Should we be empathetic when remembering these souls long gone? Do their lives matter today?

Recently a certain historic home located on a main residential street piqued my interest. I was somewhat familiar with the story of the family who lived there and who had lost a son in World War I. In searching for more information, I easily found some newspaper articles which I will share with you readers. Sidney and Polly Waits’ Magnolia Cemetery index book helped as well.

In The Andalusia Star edition, February 26, 1918, it was reported that some officers and men from Andalusia were now in the trenches “somewhere in France. Write them a line or send them your Star after you have read it. They will be glad to hear from home.”

James Malcomb was one of those soldiers mentioned. He had been a graduate of the Andalusia High School. By April 1918, his mother apparently had shared a letter she received from her son and it appeared in The Andalusia Star.

“Somewhere in France – My Dearest Homefolks, I have just returned from town where my pal and I got on the outside of a big supper. I feel considerably better than a night or two previous. As I have said before, Sundays were the only days I have had to write. I want you all to know that I am getting along fine. This being my first occasion to sleep or eat in a decent place since leaving the states, I am certainly making up for lost time. My room is in the third floor of the building and as summer time is approaching, I am sure it will be very comfortable here later on when the sun begins to shine.”

“This is a very queer country for one day may be very warm and by night it will be snowing. But we have greater things to worry over than the weather – for instance, the quickest and best way to kill Germans. From what I hear, they are being slaughtered at their own tricks.”

“Don’t think I ever wrote you concerning my trip across a certain body of water. Well, one night we were drifting along as sweetly as could be and all of a sudden, we struck a gale. For hours, we were tossed from one side of the boat to the other when finally we had orders to put on life preservers and prepare for any danger that we were likely to encounter. So we proceeded to do so. Never have I seen as many sick boys in one hole. Some almost praying that the boat would sink. About twelve o’clock that night, a giant wave came dashing overboard and tore one side of the railing completely off. Of course, all thought a submarine had us and as fast as we made for the door, we were very fortunate in being kissed in the face with a big slosh of water sending us winding back in one corner. From then on, we were uneasy most of the time until we landed in France.”

“Sometimes I imagine myself a cat as having nine lives. Think it was a mistake about Charles Stuckey being wounded although I haven’t seen him in some time. We have a boy here from his company, and he has heard nothing about it. JAMES MALCOMB”

Another letter a few weeks later, Malcomb wrote, “My Dearest Mother, I fear that you are uneasy about me for this has been my first opportunity of writing in three weeks. I had always tried to be prompt in writing home folks.”

“Well, it is like this – while we were in trenches some few weeks ago, there was no post office near. When we were relieved and sent back of the lines to prepare for a hundred mile hike, I wrote you every night. Just the night before we were to start marching, here came an order to cancel the hike and to ‘bout face’ back to the trenches. The rain and the hail was nearly penetrating our ‘steel caps’ but over here, we stand back for nothing. From the way the Huns sent their 105s over our heads, they must have known we were at close range, but fortunately, no one had a scratch. Our destination was reached at 2:30 in the morning. All found the way to our little mud homes. With rats and smaller insects crawling over our face, we slept comfortable.”

“The next morning was cloudy with a few showers now and then. It was at seven o’clock when Capt. came down and informed me to pack up and be ready to leave. I was hasty in shoving my duds in my pack….My health is excellent so do not worry. Give my regards to all.”

The November 28, 1918 edition reported this front page  notice – “LIEUT. JAMES MALCOMB MAKES SUPREME SACRIFICE – Mingled with the universal joy and rejoicing over the end of the war will be sincere sympathy with those whose loved ones made the supreme sacrifice and will not return to them when peace has been restored.”

“Monday morning a letter came from Lieut. Max O’Neal conveying the sad news that big hearted Lieut. James Malcomb who was wounded in action had died from the wounds in a base hospital in France. Malcomb was the eldest son of Mr. and Mrs. M. A. Malcomb of this city who had heard that their son was wounded but who were wholly unprepared for the sad news that reached them Monday evening.”

“James Malcomb left Andalusia as a private and went with the Alabama boys to the Mexican border where he served with credit. Later he was sent with the Rainbow Division to France. His record was such that he was sent to an officers training camp early in the year when he took the necessary training and received his commission. Lieut. Malcomb was then assigned to duty and was allowed to participate in some of the heaviest fighting on the western front. It was while leading his men in a charge on the Huns that this brave hero fell wounded several weeks ago.”

Sisters of James Malcom were Myrtis (Mrs. Leon Benson), Maggie (Mrs. Willliam C. O’Neal), and Ruth. The only brother was Marion, Jr. Father M. A. Malcomb, Sr. later passed away in 1939 and mother Kennie E. in 1946. Apparently the sister Ruth Wood Malcomb never married and lived in the home place on College Street for the rest of her life. Family members in the Leon Benson family next door affectionately called her “Aunt Ruth.” The beloved matron passed away in 1976 at the age of 72 years.

In 1939 the death notice of Mr. M. A. Malcomb, Sr. described this patriarch as a well-known and respected and substantial citizen of Andalusia, having built a number of dwelling houses thus contributing to the growth of the city. He was active in his church (Baptist), a good neighbor, and was held in high esteem by all who knew him in his long and useful life (72 years).

In 1936 the V. F. W. (Veterans of Foreign Wars) organized a post (Post # 3454) in Andalusia which was named the Battle-Malcomb Post in memory of two Andalusia boys killed in World War I. Otis Battle who served in the Navy went down with his ship Cyclops. James Malcomb was killed as a result of wounds suffered at the battle at Chateau Thierry. Homer Garrett was the first post commander.

Mr. Garrett stated that the objects of this association are fraternal, patriotic, historical, and educational. “It helps to preserve and strengthen comradeship among its members and to perpetuate the memory and history of our dead and to assist their widows and orphans.”

It was good to learn that Malcomb’s parents lived to see the V. F. W. post named in their son’s memory.

The Malcomb home along with other neighboring historical properties on Sixth Avenue and College Street was included in the J. W. Shreve Historic District prepared in 2009. Linda Brogden Palmer, a member of the Covington Historical Society, did the research and submission paperwork to the Alabama Historical Commission on this district. She and her husband Carl own the Givens home Circa 1915 on the corner of College Street and Sixth Avenue.

Yes, I hope you readers will agree that we do learn from stories about the past and the homes where families lived. Their lives do matter for they are an inspiration to those of us who like to Remember When.

“Every house where love abides

And friendship is a guest,

For there the heart can rest.”