Shirley Nelson House, devoted wife, mother and grandmother, went to be with her Lord on July 24, 2021.  Shirley was born Jan. 5, 1934 in Hatfield, Missouri.  She attended Northwest Missouri State University, and then was married in April of 1953 to John Leo House. 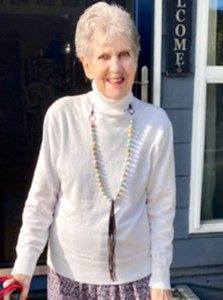 Shirley enjoyed everywhere they lived and made dear friends in each place.  At various times she owned a metal polishing business, was a high school secretary, taught 3-yr olds for 15 years at a church preschool, and was the very first female underwriter at MFA Insurance in Columbia, Missouri.

She was a contributing member of many organizations, two of which were PEO and DAR.  Shirley served as a museum docent for the Old Independence Regional Museum in Batesville, Arkansas, and was, by virtue of her Lesan ancestry, a proud member of the Mayflower Society – having been a descendant of James Chilton, his wife, and their daughter Mary.

She will be remembered for her handmade Christmas ornaments, for her patriotism and love for America, her love of history and genealogy, and for the way she beautifully decorated her homes.  She loved her family dearly, and was cherished by all.

Shirley was preceded in death by her parents, Kent and Sue Nelson, her sister Vivian Dykeman, her brother Curtis Nelson, and her husband John Leo House.

In lieu of flowers, memoriams can be made to the Old Three Notch Chapter of the DAR in Andalusia. Or, the family suggests that you do something nice for someone, in honor of and in memory of Shirley, and think of her while you are doing that.

No services are scheduled at this time.  The family plans a private memorial at a later date in Allendale, Missouri.