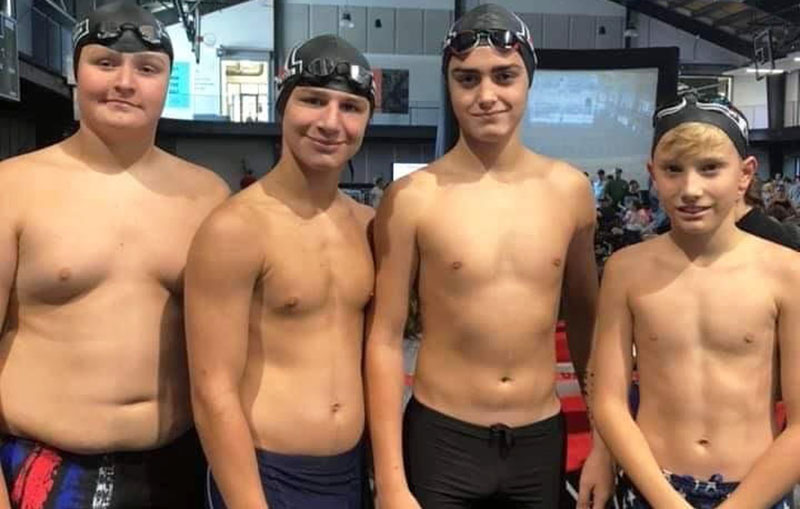 In a two-day meet held at Sand Mountain Park in Albertville, Alabama, the Stingrays of Andalusia brought 42 swimmers to compete at this year’s ARPA state finals.

The Stingrays have a strong foundation of young swimmers who competed for the first time at this level due to the cancellation of the 2020 event. No young swimmer shined more than Payten Cottle who medaled in both his 25-yard backstroke and 50-yard freestyle. Joining him in top ten finishes was swimmer and junior coach Eliana Forry on her 50 breaststroke. 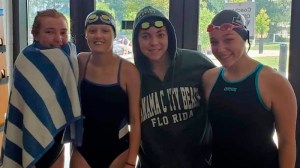 Pictured from left to right are members of the Andalusia Stingrays: Sofia Landreneau, Larra Shepherd, Briley Henry, and Eliana Forry.

Coach Darren Forry said the state competition is as competitive as they come and the Southeast is known for churning out swimmer after swimmer to compete at the next level. “We are talking about competing against 800 of the best swimmers in our state. To come out of 28 teams and finish in the middle of the pack, I will take that as a win for our program.”

Forry hopes to become even stronger with 150 swimmers next year after having a team over 100 this year. He said, “Not many programs in the entire state can say those numbers. I’ve said it before but there are certain things we simply cannot do that all these teams and swimmers can. You get what you put into swim. Through no fault of their own, our swimmers can only put in so much as our season now comes to an end while others continue on throughout the entire year. For the limited time we have, I simply can not be prouder of what we were able to accomplish as a team this year.” 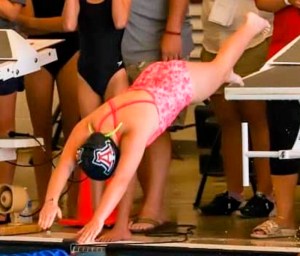 Aubryn Cottle dives for her next event at the state finals event.

Coach Andy Shaddix was also grateful for the experience the team had at the state meet. “I can’t say enough about these kids. We started with a group of 107 kids who came to the pool every day, each with the mindset to get better every day. As a coach, you can’t ask for more than that. They stepped up and showed they were not just going to talk about goals, but they were going to live them and breathe them,” he said.

Shaddix was a member of Andalusia’s first swim team and has become very appreciative of the community. “It is beyond exciting to see the citizens of Andalusia and the surrounding areas embrace and support the team and sport. It’s one of those things that just goes to show the sky is the limit when the correct amount of support is given to the program. I for one am excited to see where the future leads.”

Coach Josh Hudson shared his thoughts on the year for the Stingrays and thoughts moving forward. “We have an excellent group of eager swimmers and supportive parents. I’m excited to see our community embrace this sport, and I can’t wait to see what the future holds for this team.” 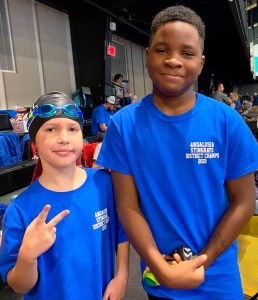 Tanner Trammell and Carter Lowery were proud to be part of the Andalusia Stingrays swim team this year.

As the Andalusia Stingrays end a remarkable season, Forry has recently opened up a swim team in Opp called Covington Aquatics. “In an attempt to give some kids the ability to carry on their passion as long as possible for our area, they will compete as a USA team for the next few months as well,” he said. The Covington Aquatics team will begin their season Monday, August 23 in Opp.