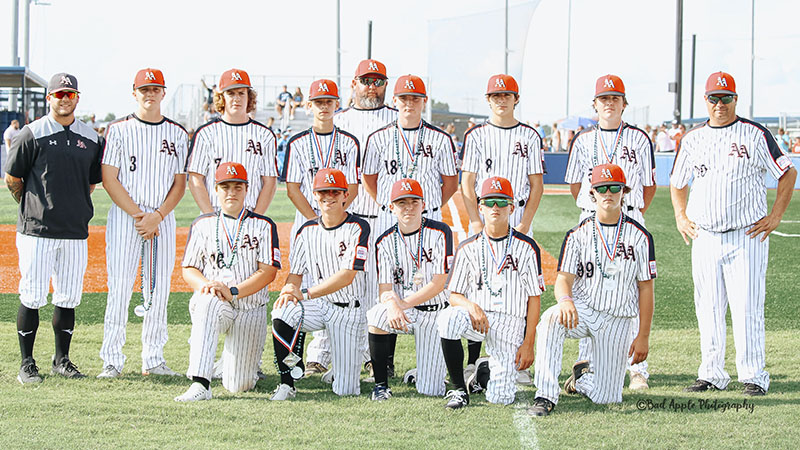 Members of the All-Star Athletics finished runner-up in the Dixie Baseball 15U World Series. The team is based in Andalusia.

All-Star Athletics, based in Andalusia, competed in the Dixie Baseball 15U 2021 World Series last week and came in second place.

“I told the manager Tony Meeks after the tournament that this tournament as an organization was the biggest step forward and the most meaningful group of wins we have had. It was the first time I can say that everyone on the team gave everything they had, did everything they could, and played any role they were asked to do at 100 percent. I was beyond proud of the way they played and enjoyed every second of their success,” head coach Michael Fox said.

The 17-team tournament field was comprised of teams from Louisiana, Texas, Arkansas, South Carolina, North Carolina, Texas, Tennessee, Florida, and Virginia. The event was held in Sterlington, Louisiana this year. All-Star earned their bid to the World Series after winning the state tournament in Eufaula earlier this summer.

Fox said his team grew physically and mentally as a baseball program this year. “We have established a winning mentality where we expect to win when we take the field. The team has seen great success this year and has either won or put themselves in a chance to win every tournament we have played in thus far.”

All-Star lost their first pool play game 5-3 to Camden, Arkansas, on July 21. The team faced a tough challenge the following day with three straight games. On July 22, All-Star routed Midland, South Carolina 17-0 and edged West Rusk, Texas 2-0. After squeaking out a 3-2 win over tournament host Sterlington in pool play, the team advanced to the semi-finals. On July 23, the team knocked out North Charleston, South Carolina, with a 5-4 win. All-Star faced JPRD East, Louisiana, in the championship game but lost 9-2.

“I’ve told these young men from the very beginning I want to develop them to be the best baseball player physically and mentally no matter if it’s the summer World Series for travel ball or game three of the state championship for school ball. Baseball is baseball, and if you can ever teach them to always approach the game with a competitive and urgent mindset, they will be successful everywhere. I want them to take the teachings and the experiences they have with me as a team into their high school baseball careers.”

Fox said they didn’t have the best knockout lineup at the World Series. “We had to fight to be able to win that tournament, and they played the game hard. They found a way, and that’s what you have to do sometimes,” Fox said.