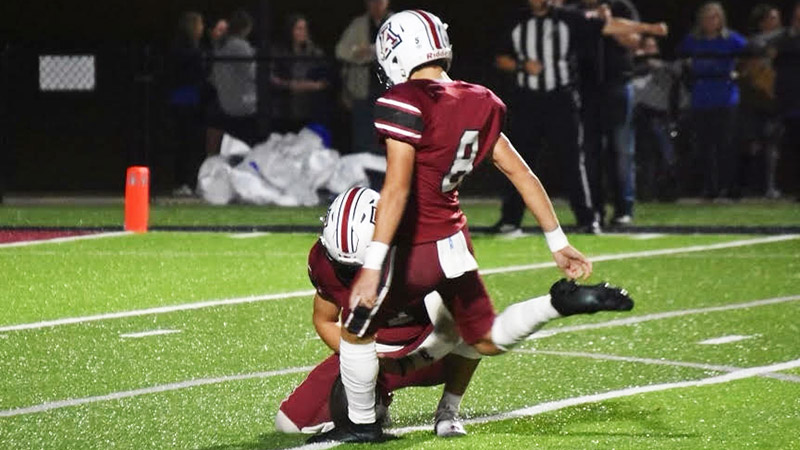 Gage Theus attempts a field goal for the Bulldogs in the 2020 football season. This fall, he will be kicking for Fort Scott Community College.

Andalusia High School graduate and a kicker for the Bulldogs, Gage Theus, is off to Kansas after signing a football scholarship with Fort Scott Community College.

Theus is excited Fort Scott has given him the opportunity to play at the next level. 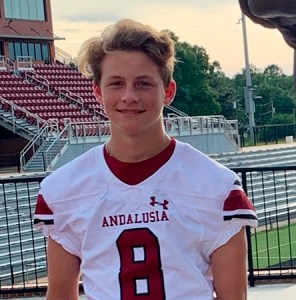 “I am both excited and honored to have the opportunity of kicking for another couple of years before I transfer to a four-year university. I’m looking forward to meeting my teammates and starting practice,” he said.

The Bulldog standout said he felt FSCC offered him the best opportunity for playing time, although the change in scenery may take some getting used to. “There were other schools where I could have gone, but their rosters are probably filled by now. It will take a little time getting used to being in Kansas after growing up in Andalusia my whole life,” he added.

He said he intends to focus on academics while playing football and plans to pursue a degree in Criminology.

Theus made 26 of 27 extra points and converted 6 of 7 field goals in the 2020 season, one of which went 50 yards. He had 28 kickoffs for 1,578 yards averaging 56.4 yards per kick and scored 44 points as a senior for the Bulldogs. “Gage was a tremendous athlete at AHS, both as a kicker on the football team and on our soccer team. Along with his achievements in athletics, he is an outstanding young man and student. There are not a lot of kickers who get the opportunity to sign a scholarship, and I think he has a chance to play at a four-year school in the future. The sky’s the limit for him,” Head Football Coach Trent Taylor said.

He is the son of Robbie and Susan Theus and the youngest of three children. His brother Jordan and sister Emily both live in Auburn. Fort Scott Community College is located in Fort Scott, Kansas.