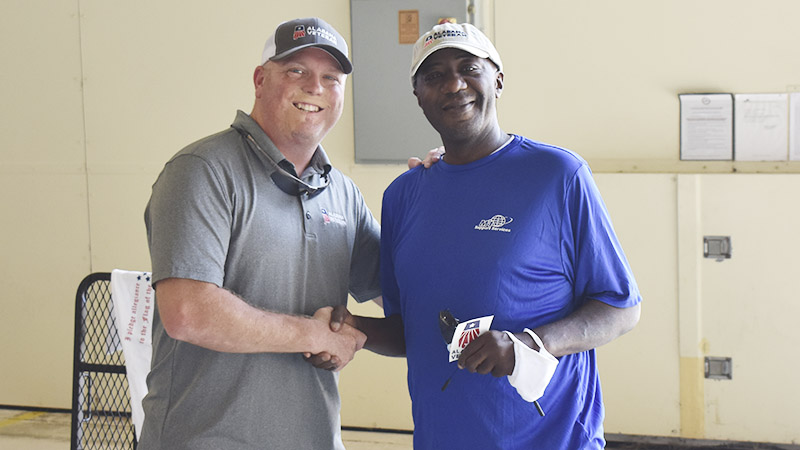 The idea first came together in March 2020. Alabama Veteran Board of Directors Alan Cook said they partnered with ExpectCare after his wife was hired as the executive director in Birmingham. 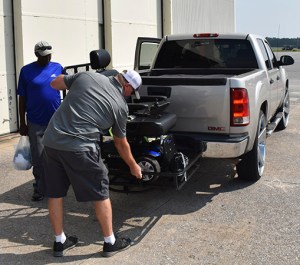 “They provide hospice, palliative, and private sitter services to patients, and we began to provide support for their veterans in service as volunteers. We would accompany their nurses and social workers to veteran homes as well as those in facilities that were on hospice services,” Cook said.

South Alabama Ambassador John Major Parker explained that the board posted on their website where five chairs were given to them.

“I immediately got in touch with (Cook) who told me we still had a chair available. I work directly with Mr. Shellman and see his daily struggle with his prosthetic along with his health conditions that hinder him some,” he said.

When Parker approached him and asked if a chair would help his quality of life, he gladly said yes. “He will be able to do a lot more things with his family. He can go to amusement parks and concerts. Having this chair will really help make his life better overall.”

Cook explained how they asked veteran patients about some of the struggles their families go through. “One of the main struggles was acquiring adequate DME equipment due to the red tape of having to meet certain criteria. After seeing the need of providing a better quality of life to those on hospice, my wife created a program that would help meet these needs through their WayMaker Program,” he said.

They reached out to local and national durable medical equipment companies about donating the motorized wheelchairs. Cook added, “The rest is history, and we have been providing them free of charge to those veterans that don’t meet Medicaid, Medicare, or private insurance qualifications.” Cook and Parker are both 1997 graduates of Andalusia High School.

“As an OIF/OEF Marine veteran, I’ve directly seen how veterans struggle to acclimate to civilian life after the military with the lack of local support services and the direct correlation of socioeconomic issues, isolation, and veteran suicide,” Cook said. “Alabama is second in the country in veteran suicide. That plague is something that we should really be concerned about. That is why I believe in Alabama Veteran and their mission.”

Parker is a combat veteran of Operation Iraqi Freedom who served in the Kosovo Campaign. He said a lot of wounded veterans become depressed and will not reach out for help. “As long as I’m an ambassador for Alabama Veteran and I have breath to live, I’ll help a veteran. They get suicidal thoughts, and their overall general health goes downhill. This is just huge for us as an organization,” Parker said.

The mobility chair was donated in partnership with ExpectCare and O’Neal Medical in Birmingham. Shellman said he was very thankful for the chair and the efforts of Alabama Veteran. “This means the world to me,” he said. “It’s really been a struggle since I lost my leg. It will be a blessing to have this chair and be around the people who love and care about me.” 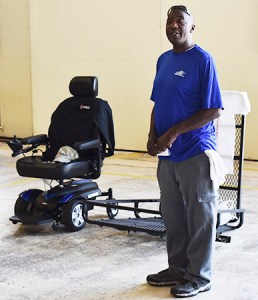 Abner Shellman is excited about the mobility chair he received from Alabama Veteran.

Parker said it was a proud moment for Shellman. “I’m more than happy to help him any way I can. This one is sentimental to me since I see him every day at work. It was a mission of mine long before the chair because I was already trying to look for ways to help him.”

Shellman served 4 years in the United States Army. Although he did not enlist in any wars, he said freedom still meant a lot to him. “Freedom means being a part of acceptance and just having the opportunity to be free. There have been a lot of sacrifices made, and a lot of people have made more than I have. For instance, my friend J.P. (referring to Parker) goes well above and beyond what a person should be doing. I greatly appreciate him so much,” he said.

Shellman offered some advice to individuals who choose to follow in his footsteps and join the Army. He said, “Take a chance and enjoy it. Some people may think it is a bad experience, but it wasn’t for me. I had a good experience and met a lot of good people in the military. I made lifelong friends with that sisterhood and brotherhood.”

Alabama Veteran is truly grateful to help Shellman in this time of need. Cook stated, “We hope his quality of life and ease of mobility reduces the amount of pain associated with wearing his prosthetic. His smile is our reward, and we hope that we can continue to positively impact the lives of veterans, military members, and their families throughout Alabama.” Parker agreed the chair would help give him a better quality of life. “He will be able to take his prosthetic leg off and heal. It will take some of the soreness off his legs and give his body a chance to relax. It will do him good since his body can’t heal as fast as ours,” he said. 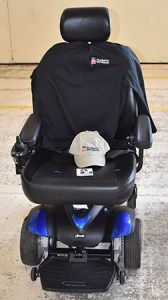 Shellman’s mobility chair was donated in partnership with ExpectCare and O’Neal Medical in Birmingham and presented to him by Alabama Veteran South Alabama Ambassador John Major Parker.

Shellman resides in Ozark with his wife Kristina and has three children: Dominique, Alexis, and Kali. “My family and friends have been there for me and supported me through this whole ordeal. Without them, I don’t know where I would be,” he said.

For more information about Alabama Veteran, call Alan Cook at 205-790-7016 or e-mail info@alabamaveteran.org.

“I have a weak spot in my heart for veterans. Being a combat veteran myself, I know the daily struggles you give up. We just want to keep them engaged and offer them a good life,” Parker said.